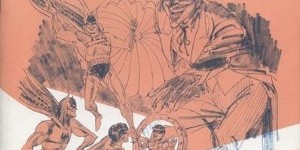 Howdy, comic book fans!  It’s time once again to dig through my comic collectibles for this week’s Fabulous Find!  And this week I bring to the light Amazing World of DC Comics # 4. This is the DC Comics’ house fanzine published by National Periodical Publications, Inc.  Issue number four is cover dated January 1975, though in the indicia, it’s listed as January-February 1975, as it was being published bi-monthly.

This issue is billed as the Special Batman issue and features a new drawing by writer/artist Jerry Robinson!  It’s a beauty, take a look, why don’t you?: 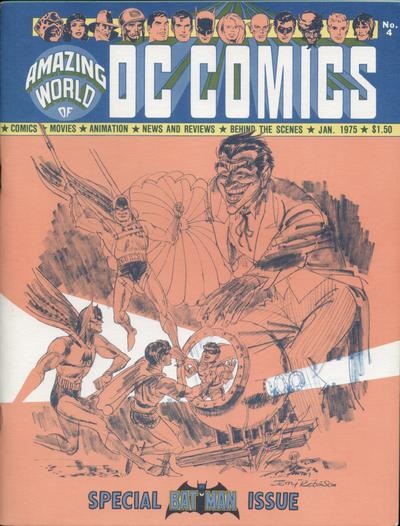 The inside cover features a nice picture of the Joker, the Riddler and the Penguin from the 60’s Batman live action television program.  Next up is the Table of Contents and the indicia.  Leading off this issue is a profile on the cover artist, Jerry Robinson, who is listed as the creator of the character, the Joker!  This profile is written by Anthony Tollin.  The article is accompanied by reprints of Batman covers drawn by Robinson, as well as, cartoons drawn by him and a number of pictures!  And if you ever wondered what Mr Robinson looked like, here’s one of those photographs: 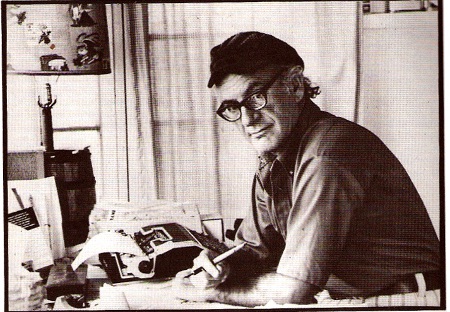 Next is a one page editorial written by Bob Rozakis.  This is followed by “The Batman That Never Was”, written by Allan Asherman.  It discusses a script written featuring Batman that was never produced.  It is not even known who wrote it up, but it appears to have been written after the 1943 Batman serial and the 1945 Superman radio show, where Batman appeared!  Pretty cool and something that I had never heard of!

Then there is a two page story/article written by Jack C. Harris on his appearances at the 1973 and 1974 New York Comic Art Conventions dressed as the DC Comics villain; Two-Face!  Considering the interest toady in “cos-playing” it was interesting to see someone’s efforts in the “early days” of comic fandom.  He tells of how he created the costume and make-up then the results of his appearances in the costume contests at these two conventions.  Here’s a step by step make up demonstration:

He said the hardest thing was shaving off his beard, prior to the Picture 1.  Picture 2 shows the “eye-patch” he created to cover his real eye.  For the record, he does admit to having years of experience in amateur theater and films in the make-up department!  Her’s the final steps:

Then using hot water and powdered, unflavored gelatine, he created the “rotting flesh covering one half of his face (see Picture 3), and then finally adding burgundy grease paint to add color the the damaged “evil” side he completed the make-up stage!   Obviously he added gell his hair to created the two different looks, as well!

Next up is a one -page “Chuckin’ It” written by Guy Lillian III, in this column he discusses his first printed letter in a DC Comic book, as well as, many others that appeared over the years.  Following this column are nine pages of Direct Currents, listing the up-coming comics to be published by DC in the months ahead.  The comics covered in this issue are cover dated  May and June 1975.  This comics would have appeared on the comic book racks during February and March of 1975.

The centerfold is next, and it is not a nude Playboy bunny , but an unpublished Batman cover, drawn by Dick Sprang!  Leading off the second half of the book is an interview with Denny O’Neil, conducted by Guy Lillian III.  It’s dated now, but is still interesting, as he discusses his run on Green Lantern/Green Arrow, as well as, Batman and the recent pulp hero revival that DC was attempting with the Shadow, etc.

The next page is actually an ad of sorts, giving you the chance to buy photographs of George Reeves as Superman.  This seems rather odd, since the issue is all about Batman and Superman sticks out amidst all the Batman coverage!

Then we get fourteen pages, clearly the largest coverage of anything in the issue, of the Batman newspaper comic strip by E. Nelson Bridwell and Al Plastino, that ran in September through November 1970.  This is the first half of the adventure and the editors promise the second half of the strip will run in the following issue of Amazing World of DC Comics.  Unfortunately, I do not own issue number five (5), so I don;t know if they lived up to their promise or not!  The strip not only features Batman and Robin, but has a special guest star, Green Arrow!  Here’s one of the pages: 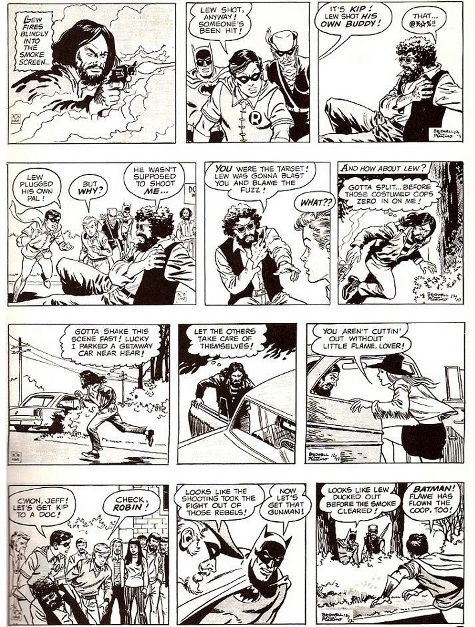 Which brings us to the last article in the issue, entitled; “same Bat-Time … Same Bat-Channel!” written by Carl Gafford.  As you may guess by the title, it covers the phenomenon known as the 1960’s Batman television show!  At the time the show had run it’s course (three seasons) and had already been off the air for seven (7) years!  Now it’s been forty-six (46) years since it’s demise.  I know some people love it to this day, while others hate it, as much as anything they have ever hated, but no matter what your feelings toward the show, it certainly not only made it’s mark at the time, but still resonates almost fifty (50) years later!

It sparked something in not only the public, but also in Hollywood itself, as actors and actresses lined up to get on the show asa a villain, or even in just a cameo, during the “wall climb” portion of the show where Batman and Robin encountered various celebs who were given some sort of quip in reaction to finding Batman and Robin climbing up the side of their wall.  Remember such great actors and actresses who appeared during the three season run.  Frank Gorshin, as the Riddler, appeared in the pilot episodes and a number of others, before leaving and being replaced by John Astin.  Cesar Romero appeared in nineteen (19) episodes as the Joker!  Burgess Meredith played the Penguin in twenty (20) episodes!  Plus who could forget Victor Buono as King Tut, Vincent Price as Egghead, and the extremely lovely, Julie Newmar, as the first Catwoman (12 episodes)!  Later, Catwoman was played by Lee Meriwether, in the Batman movie, and Eartha Kitt played her during the third television season!

And things are wrapped up with an inside back cover drawn by Dick Giordano, featuring Batman, Robin and the Penguin and a Catwoman back cover drawn by Frank Robbins!  I don’t know about you, but I think that’s an excellent issue!  So if you get the chance pick it up on ebay or at a convention near you!

Sayonara, good folks and hopefully you’ll come back next week for another RETRO REVIEW!  be seeing you …