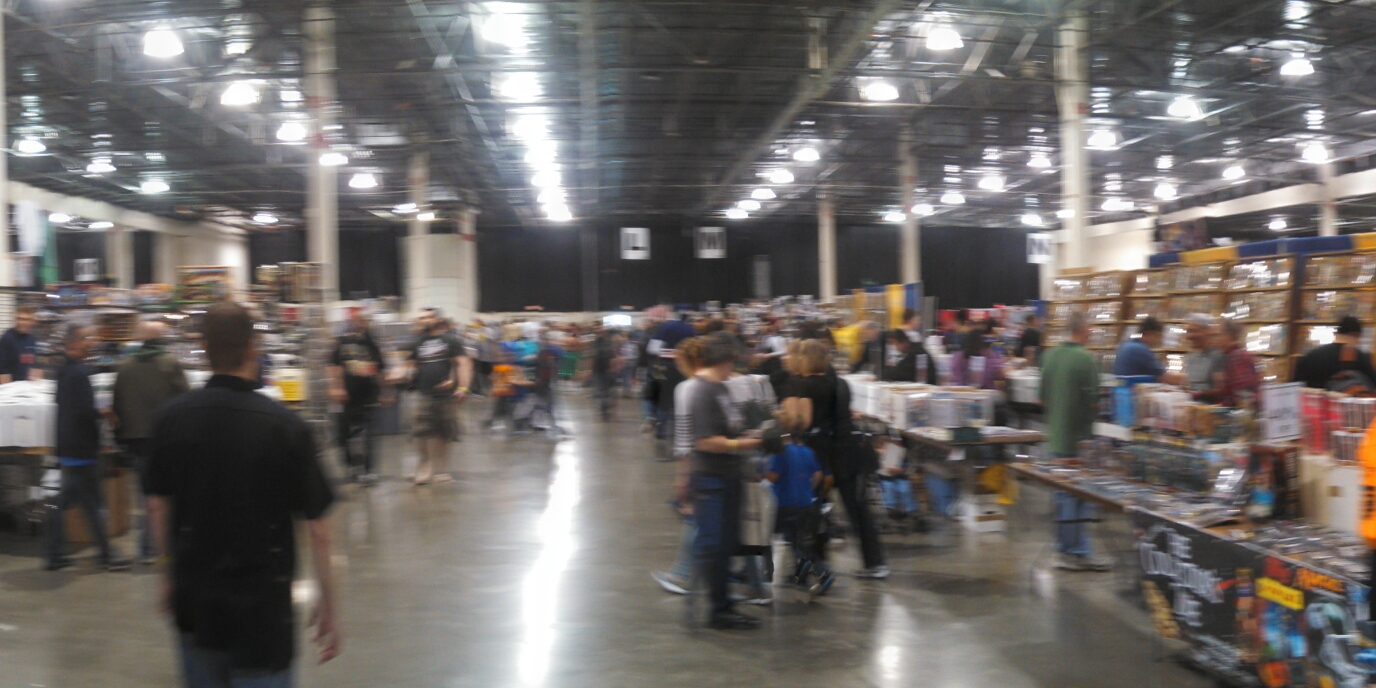 The Motor City Comic Con celebrates its 25th anniversary starting this Friday, May 16, for its annual three-day pop culture convention at its usual home inside the Suburban Collection Showplace in Novi, Michigan. For the first time, the show is occupying the entirety of the venue’s floor space, extending from the two halls utilized for past shows to all three available halls, as well as the eastern annex of the building housing the speaker rooms, providing dedicated space for panels and celebrity guest appearances. The expansion was due in large part to the record crowds that turned out for last year’s show, an issue that convention founder and organizer Michael Goldman addressed immediately after its conclusion, stating that measures to secure the entire facility were to begin immediately.

Last year’s large attendance caused the usual problems associated with huge crowds, including excessively long lines, parking shortages, and intense traffic jams, and organizers have taken steps to address those problems for this year’s con. According to the show’s website, two thousand additional parking spaces were made available in addition to offsite parking with shuttle service. The organizers also contracted a company to handle crowd control and security, and added additional ticket scanning operators at the show’s entry points. Come Friday afternoon, traffic heading to the show was fairly typical for late afternoon rush hour traffic in the area, and parking spots were available on the show grounds. 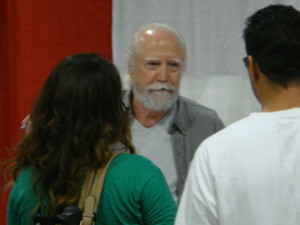 Scott Wilson, aka Herschel on AMC’s The Walking Dead

Among the anticipated media guests this year are the bionic triumvirate of Lee Majors (although not present on Friday), Lindsay Wagner, and Richard Anderson, former stars of the fondly-remembered 1970s Six Million Dollar Man and Bionic Woman TV series. Former The Walking Dead stars Scott Wilson and Jon Bernthal were also appearing, as well as the granddaddy guest of them all, William Shatner. Among comic guests, longtime inker Tim Townsend is making his first appearance at a Motor City Comic Con, along with veteran writers Chris Claremont, J.M. DeMatteis, Gerry Conway, and Mark Waid. Regular guests Billy Tucci, Art Baltazar, and David Petersen were also among those in attendance. 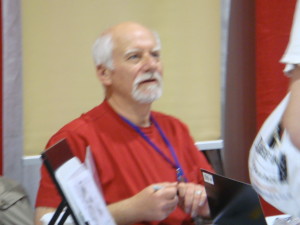 The larger convention floor footprint allowed for wider aisles in many locations, greatly easing the passage of pedestrian traffic. On the right side of the hall near the back, the largest aisles were reserved for the high-traffic media guests, although come late Friday afternoon traffic through this area was light. To the left was a generous amount of space allotted for the Artists’ Alley exhibitors. And in the center were the retailers, dominated largely by toy and comic book dealers. As is typically the case, the late Friday afternoon crowds were light, after an initial rush earlier when the show opened. In Artists’ Alley, Claremont, Tucci, and regular guest Mark Sparacio all reported strong sales throughout the day, at least up until a couple of hours before the floor closed for the day. 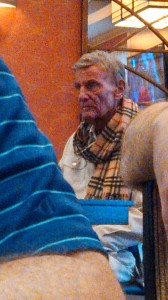 Richard Anderson waits for a bite to eat

In addition to taking advantage of the entire convention facility, the newly opened adjacent Hyatt Place Hotel served as a popular gathering spot  after the show ended, and was a welcome addition for guests and attending staying there and having the convenience of their lodging being a mere elevator ride away. By all appearances, the event’s first day seemed to run smoothly and there was little internet chatter that revealed any serious issues. More updates tomorrow. 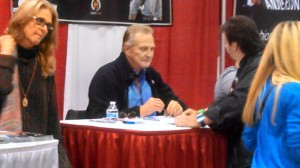 Many attendees who experienced traffic jams and frustrating lines to enter the show last year breathed a sigh of relief this year, as for the most part neither materialized. Those travelling to the con during the early afternoon hours faced no traffic issues whatsoever, although parking spaces were difficult to find, and the lot was difficult to maneuver through as many elected to park illegally in, choking off many of the aisles in the convention center’s parking lot. Lines as the show opened were lengthy but quickly shortened as attendees entered the building.

Once inside, crowds were thick in the front portion of the exhibit hall, but thinned out further back. Special guest William Shatner unsurprisingly and immediately drew the longest line, and was scarcely visible at his table through the hundreds of fans waiting in line. Lee Majors also drew healthy lines, in part due to his absence yesterday. Comic artists drew their share of fans as well as plenty of sketches on Saturday as well. 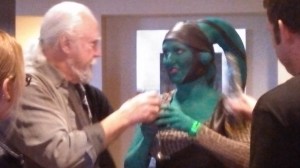 As Saturday typically sees the largest crowd, it also sees the largest number of cosplayers. Saturday evening also hosts the con’s traditional comic con bash, taking place this year at the new Hyatt Place Hotel lobby and bar. As the party attracts both attendees and guests, it’s a rare opportunity for fans to potentially interact with some of their favorite creators and actors. It can also be interesting from a fanboy perspective, to witness these celebrities and fans interact.

The convention wraps up tomorrow.

As is typical for most every convention, Sunday sees the most fans coming in early, before quieting down in mid-afternoon. Several retailers mark down their prices in hopes of clearing out as much as possible before tearing down, and buyers and collectors make one last perusal through exhibit hall looking to take advantage of those last minute deals.

Motor City Comic Con 2014 was a well-attended show that benefitted from the additional exhibitor space and extra measures taken to avoid a repeat of the problems experienced by many attendees last year. The proximity of the attached Hyatt Place Hotel offered incredible convenience to guests and attendees, providing additional lounging areas and refreshments for those seeking them.

Below are more pictures from this year’s show. Next year’s convention is scheduled for the same weekend at the same location, May 15 – 17, 2015 at the Suburban Collection Showplace. 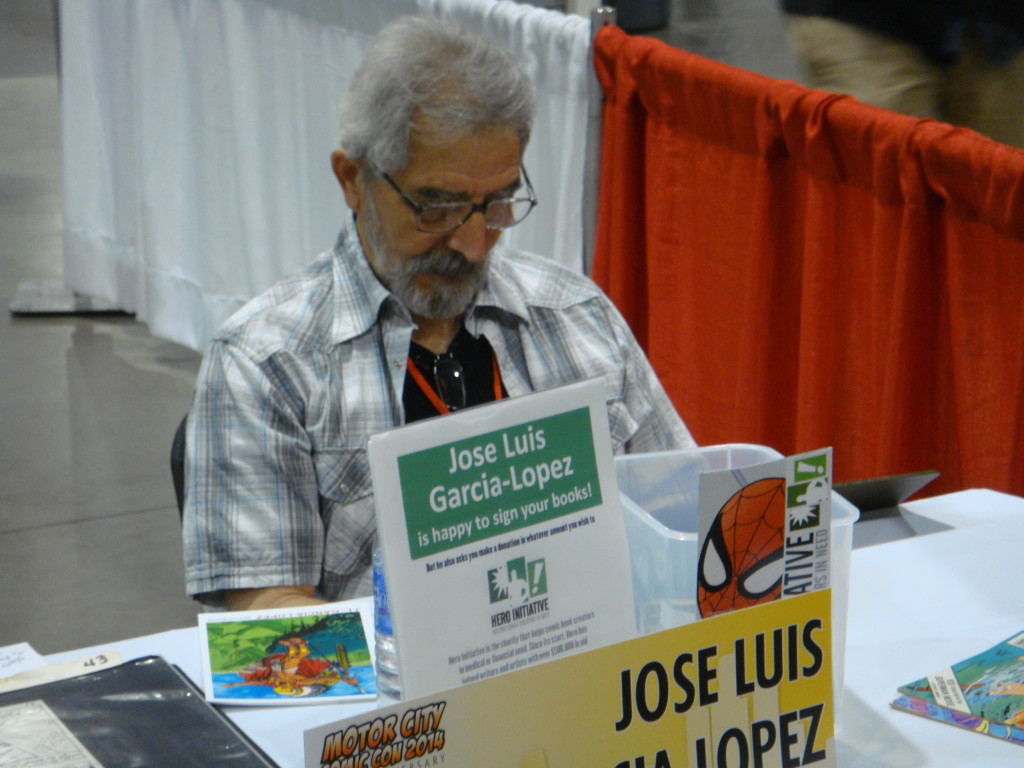 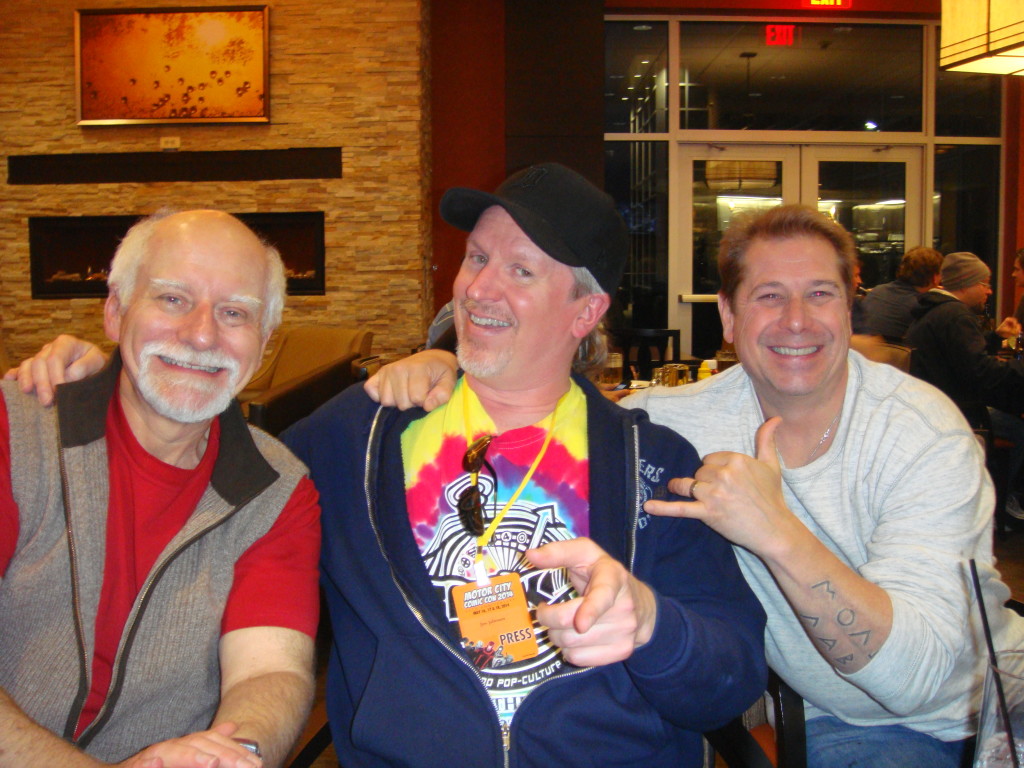 Chris Claremont, JJ, and Billy Tucci hang out at dinner. 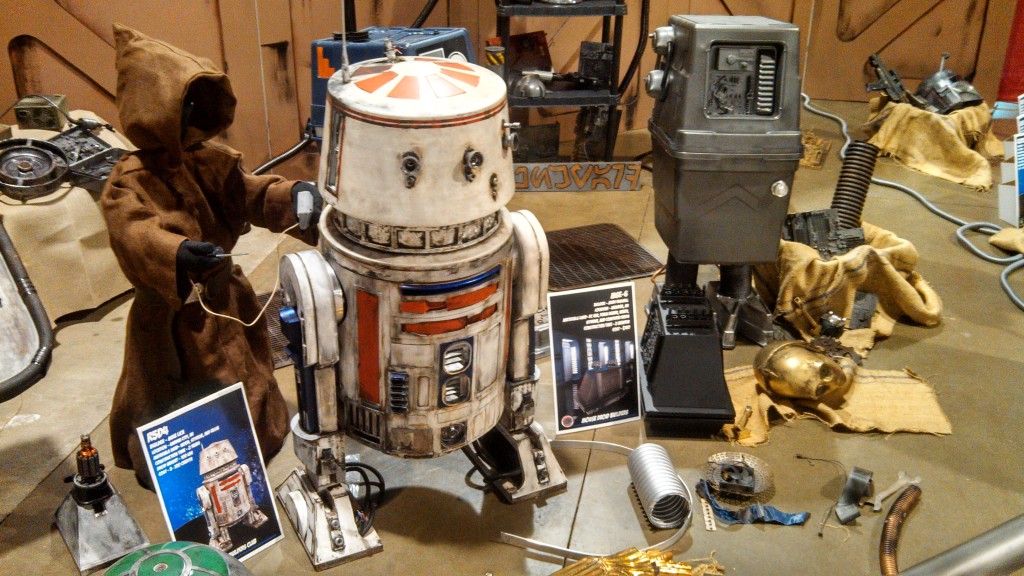 The cargo of the jawa sandcrawler at the 501st Legion. 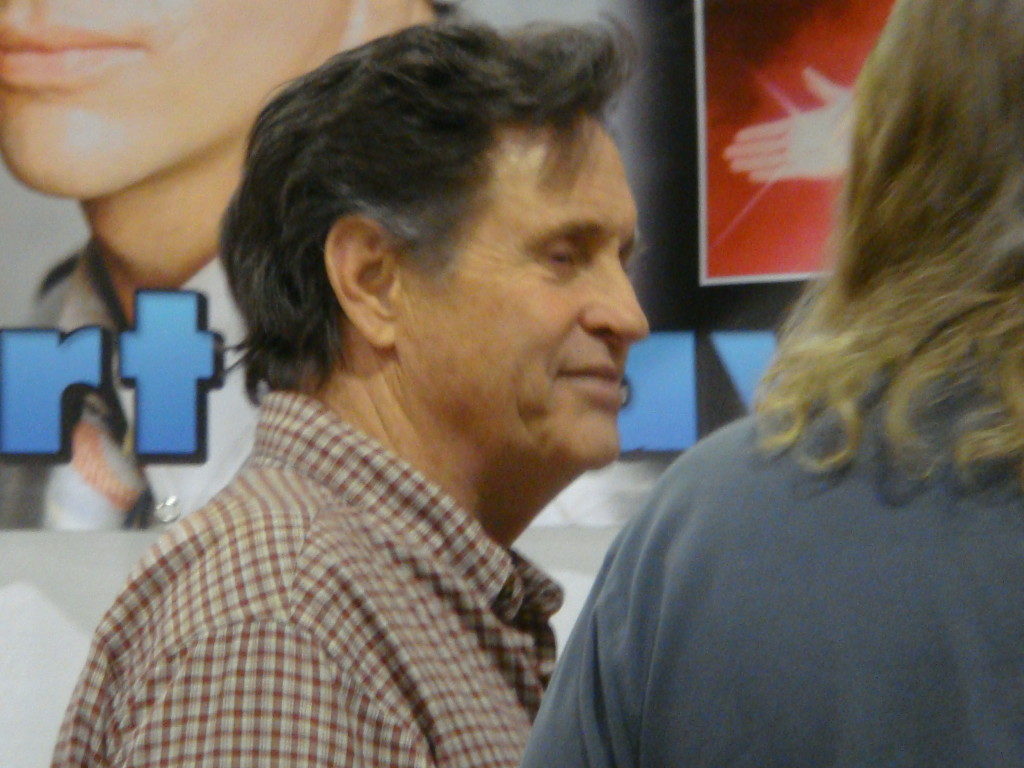 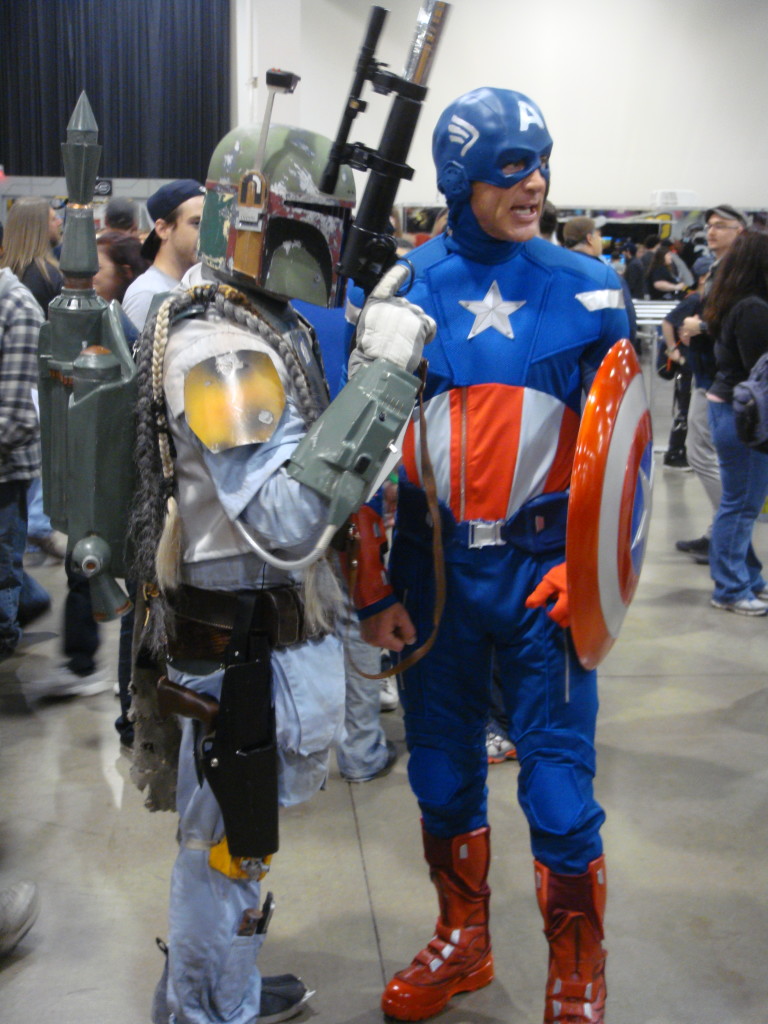 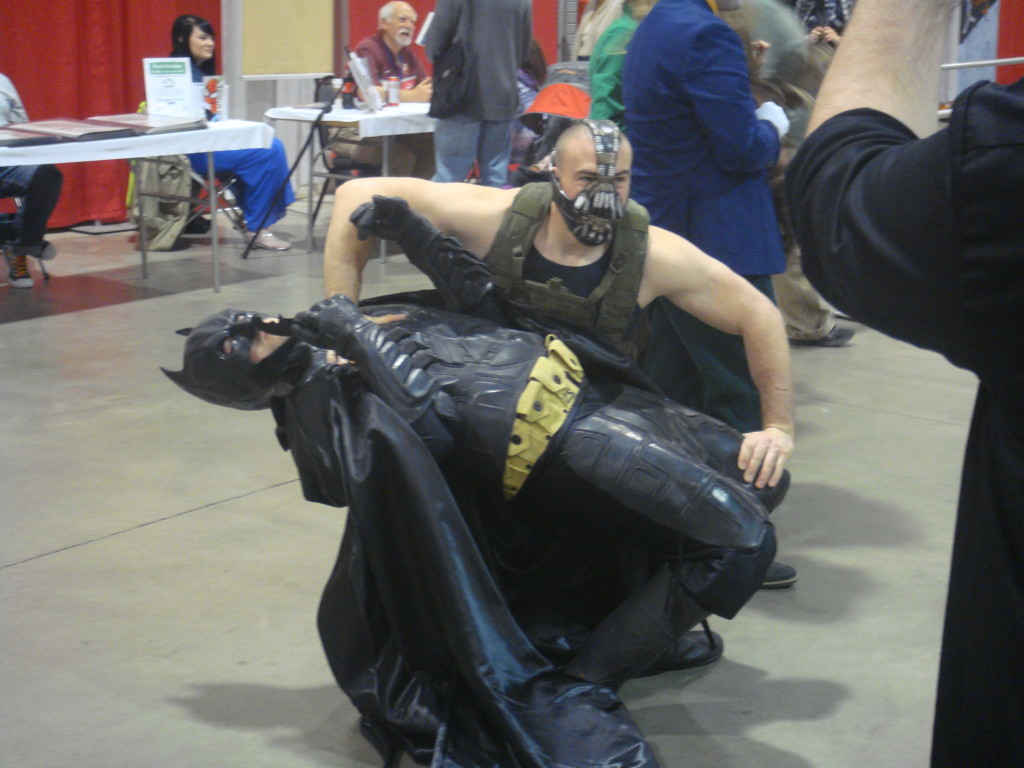