Among Friends Airs Its Dirty Laundry 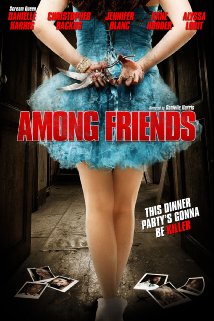 Among Friends is a 2013 thriller/horror film written by Alyssa Lobit. It is the directorial debut of the fan favorite scream queen Danielle Harris (Halloween 4 & 5). It stars Alyssa Lobit, Jennifer Blanc, genre favorite AJ Bowen among others.

Rookies of the Year

Among Friends is a story of an 80’s themed murder mystery dinner party that takes a dark turn. It’s a very small cast and the majority of the movie takes place in one room, which can be challenging for any film, especially with a director making their debut and a writer tackling a full length horror film for the first time. That being said, Among Friends doesn’t suffer from this in any sense of the word. A fair amount of people that aren’t fans of the genre assume that all horror films are more or less the same. That’s an assumption that causes many horror films to be overlooked, which is a shame, because this one should not be overlooked by anyone.

Among Friends is a horror film that is very accessible to more than just your average horror fan. It’s not a movie about a masked slasher with seemingly supernatural abilities chasing horny teens around in the dark. It’s not a movie that relies on jump scares and gore to get under the audiences skin. Among Friends uses what a lot of people find truly frightening to give viewers the heebie-jeebies…real life. There are some very real interactions between the characters in Among Friends and that’s what makes it succeed. They don’t have to deal with outlandish foes, but with things that we see on the news every day.

Experience Is A Valuable Asset

Danielle Harris shows that she is a valuable asset in front of and behind the camera. She’s been in the business since childhood and it’s clear that she learned from her experiences and didn’t just go through the motions for a paycheck. The story stays tight and clear without going off the rails like we see far too often. There are sequences in Among Friends that could have very easily gotten out of hand, but Ms. Harris kept them on point. Alyssa Lobit as far as I can tell had only written one full length film prior to Among Friends, and unless I’m horribly mistaken it was not a horror film. I don’t know if Ms. Lobit is a big fan of horror, but I’d definitely be interested to see her do a few more films in the genre. Instead of writing a movie we’ve seen dozens of times before she gave us something fresh and interesting. Among Friends was an excellent break from what I’ve come to expect from modern horror. She delivered a great story and an excellent performance on screen. That can’t be said about too many people.

Among Friends wasn’t a success just because of Danielle and Alyssa, though. Everybody in the cast brought their characters to life and helped make it seem very real. I was drawn in and was interested to learn more about each character. The gem of the movie, however, has to be the legendary Kane Hodder’s (Jason Voorhees from Friday the 13th VII-X) performance. I have the feeling only Ms. Harris could have gotten a performance like that out of Kane.
Among Friends is a film that showcases the talents of many of the cast and crew, with very little faults that aren’t even worth mentioning. I recommend this to anyone that wants something that steps out of the box that horror has been put in.