I Will Tell You #87:
Christmas Lights on Halloween, Doo Dah, Doo Dah 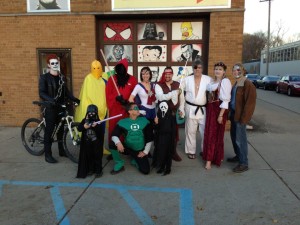 Come on out for all the fun at B2TP’s Halloween party!

A lot of people adorn the outside of their homes with Christmas lights, everyone knows that. And typically, the decorations usually go up in early December, or maybe around Thanksgiving for some of the more eager and anxious Christmas lovers. Problem is, at least in the northern climes, it’s pretty frickin’ cold by that time of year. And the only reason we call them Christmas lights is because, well, they’re lights that generally go up around Christmas. But take a look around sometime.

Hooters. Got your attention now?

Take a look around like, the next time you go for dinner or a drink at Hooters, for example. Not many guys need to be told to take a look around whenever they walk into Hooters, but once your eyes get past the infamous wildlife that the establishment is best known for, keep looking. Past the hot, young waitresses. Past the ten hot spicy garlic boneless wings, available for $7 on Wednesdays. Even past the faux-wood-paneled walls that make your grandparents’ basement look modern. Past all that, at many Hooters locations, are the strings of colored lights that line the windows and run along the top of the walls. All those pretty colored lights, and they’re up year-round. Nobody cares. Nobody complains. Nobody probably even notices, because of the aforementioned primary attractions that are found there.

My House. My Lights. My Rules.

So what of it, and what does it all have to do with the price of candy corn, you ask? Why, I will tell you. It’s all about association. We call them Christmas lights, because, well, we’ve always called them Christmas lights. But they’re not. They’re strings of lights. And if they’re good enough for Hooters to break tradition, well then, they’re certainly good enough for the rest of us. So one year, when I decorated the front of my house for Halloween with the usual pumpkins, scarecrows, hanging skeletons and the like, I decided that some illumination would be useful once darkness fell, and that simply turning on the porch light seemed a little too pedestrian. So I went into the garage and got out my Christmas lights, going for a kind of Nightmare Before Christmas-type vibe. But the colored lights didn’t really light up the decorations all that well, so the next day I went out and bought a couple strings of white lights, which ended up doing a much better job. 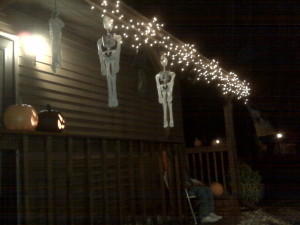 Frost On The Pumpkin

Now, this happened to be a relatively mild and sunny afternoon, something that really isn’t all that uncommon here in southern Michigan, despite what many might think. But, by the time the first week of November rolls around, Mother Nature becomes decidedly frostier. So come time to actually take down all of these decorations, the lower temps, as well as the wind and / or rain that often accompany them, typically make it a much heartier task than putting them up. So amidst some rather dreary weather conditions, the scarecrows and skeletons got put away, the pumpkins got pulped for the garbage man, and the lights, well.

My fingers were numb by this point. So the lights stayed up, at least until the weather got a little better.

Except, come November, history shows that the weather isn’t going to get any better. At least, not until April or so. And sure enough, it didn’t. And I wasn’t really all that anxious to get out there and start yanking light strings around, when my hands would get so cold that I’m not sure I would even feel it if I somehow accidentally electrocuted myself. So, I left ’em up; screw it. Now, I didn’t leave ’em on. I unplugged ’em. I’m cheap that way. And I didn’t want to get some kind of citation from the neighborhood association.

But it occurred to me shortly thereafter that, if I was just going to leave them there, that I would save myself the frigid and unpleasant task of putting them up a second time a mere few weeks later, for Christmas season. So at that moment, I decided I was going to become one of Them; you know, one of them there hillbilly types that leaves their lights up year-round. Just like Hooters. All I needed was a rusty old car on cement blocks in the front yard, right next to the washing machine and old toilet used as a planter, and leaving those light strings up would hardly seem like any kind of offense at all.

Actually, I don’t leave them up year-round. But yes; they are up there for most of the fall. And if there is an uncharacteristically mild day come January, I’ll pull them down. If they’re not caked in eight inches of ice. If they are, well, then they might stay there for a good part of the winter, too. Turned off, of course, so don’t think you can rat me out, neighbors. 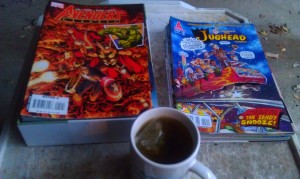 Comics for Trick-or-Treat. Give those age-appropriate comics to some kids!

The Better To Read Comics With

But come Halloween night, they will be turned on. Shining brightly. And when the Trick-or-Treaters come by, and get both candy and a comic book, those lights will immediately help them see what kind of cool treat just got dropped in their bag. In fact, I’ve been putting up those lights for a few Halloweens now, but I’ve been giving out comics for much longer. So I’ve been in the good graces of the neighborhood kids for quite awhile now, and I take pride in being the “cool” house in the subdivision, just as I take comfort that such a cool factor will hopefully keep my house from being egged and TP strewn through my tree branches. Those lights are a kind of a modern and seasonal equivalent of those old “Hey kids! Comics” signs that hung above the spinner racks of yesteryear.

You, Too, Can Be Cool

Yeah, kids like comics. Fancy that. Wanna be the cool house in your neighborhood? You can skip the hassle of putting up your “Christmas” lights two months early, but it shouldn’t be too much trouble to dig out some of those old (and age-appropriate) comics you really don’t want any more. There’s still time. You’ll be cleaning out your closet, you’ll be sharing your love of comics with others, and possibly introduce these kids to something they’ve never seen before. And, maybe you can keep some of that candy you already bought for yourself. The rewards are many.