The fourth annual Detroit Fanfare, or Detroit Fanfare Comic Con as it’s now officially known, is now underway at the Adoba Hotel Dearborn (formerly the Hyatt Regency) in Dearborn, Michigan. And it’s underway a day early by way of the show’s first-ever Preview Night, held from 6 – 9PM on Friday, October 25, with admittance allowed to any attendee who purchased a two-day pass.

The show expanded in size and scope from past years by adding another ballroom dedicated to the “Bizarre Bazaar”, housing many celebrity guests such as actors Tyler Mane and Brian O’Halloran as well as an eclectic collection of exhibitors selling non-comic merchandise ranging from books to toys to steampunk apparel.  Comic book retailers still largely dominated the ballroom reserved for such exhibitors at last year’s show, with an annex that contained this year’s artists’ alley guests, many of them Detroit or Michigan-based artists such as Martin Hirchak and Adam Talley.

The show continued to expand both its comic and media guest lists; scheduled celebrity guests include Thor: The Dark World screenwriter Christopher Yost, Game of Thrones actress Esme Bianco, and Detroit Lions defensive end Israel Idonije, promoting his self-published comic The Protectors from his Athleta Comics publishing venture. Presumably, Idonije will not be at the show Sunday as the Lions host the Dallas Cowboys on that day. Comic-related guests sprinkle a few familiar names along with a larger number of lesser-known and often locally-based creators.

Crowds file in, but don’t overcrowd

Moderate-sized crowds turned out for the con’s first night, more of which appeared to be spending time in the comics / artists side of the show more than the non-comics / celebrity side; several tables in this area were vacant, and most of the celebrity guests in this room had not yet arrived. Among the comic guests set up and ready for business, veteran writer John Ostrander sat at his table chatting with fans in between stretches of inactivity due to light attendee traffic. Artist Norm Breyfogle drew a steadier flow of fans seeking to get comics signed by the longtime artist. Bone creator Jeff Smith drew a fairly constant flow of fans. Smith took no commissions put provided plenty of quick sketches as he signed copies of his various collected works. 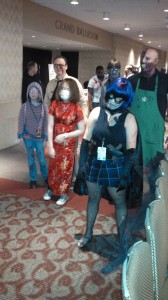 Immediately after the exhibit hall closed for the evening, the activities continued most notably with the annual Zombie Walk, originating not outside the hotel this time but within instead, as co-organizer Tony Miello cited concerns expressed by the city of Dearborn in staging such an event outdoors. The zombie walk instead therefore was a brief shambling through the hotel lobby, with fewer than a dozen clearly identifiable participants.

The Zombie Walk kicked off a Deadworld-themed aftershow a party in the hotel’s pool area, and while there was some activity in this area preceding the zombie walk, the area was all but deserted a couple of hours after the show’s close. As this party took place, the fourth annual Shel Dorf Awards were being held a floor above, and for the first time was moderated by O’Halloran, whose comedic nature and semi-intentional mispronouncing of many creator names kept the event far more lively than past award ceremonies. The awards are named after the Detroit-raised Shel Dorf, known for his founding the Detroit Triple Fan Fair back in the 1960’s and later San Diego Comic-Con after he moved out west. Presenters included artist Ethan Van Sciver, Goon creator Eric Powell, and artist and Image Comics co-founder Whilce Portacio. Among the winners were long-time artist Bill Sienkiewicz for Inker of the Year, Saga artist Fiona Staples for Penciler of the Year, Saga writer Brian K. Vaughan for Writer of the Year, and Image Comics’ The Walking Dead for Contining Series of the Year. None of these winners were present, although Diamond Distribution founder Steve Geppi was on hand to accept a special Shel Dorf Legacy award.

Upon the conclusion of the award ceremony just past 11:30PM, most attendees seemed content to head home or back to their rooms; the areas housing the con’s after-parties were pretty much devoid of the fans and creators alike, and the most activity seemed to be a few groups of attendees milling about  the hotel lobby.Detroit Fanfare Comic Con runs from 10 AM to 7PM on Saturday and 12 to 5PM on Sunday. 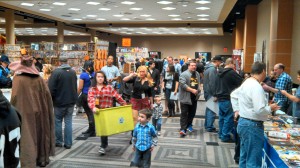 Fans took their time arriving for the show’s first full day, but by mid-afternoon steady crowds were milling about in the hotel lobby and exhibitor rooms. None of the organizers asked disclosed any information regarding estimated attendance, but the retailers and artists’ alley rooms were pretty filled with attendees, although not packed, and attendees could move through these rooms with relative ease. The remaining room at the other end of the hotel, housing the “Bizarre Bazaar” exhibitors selling mostly non-comic books, typically had less traffic save for the row of media guests at the far end which drew significantly larger quantities of fans seeking photos and autographs. 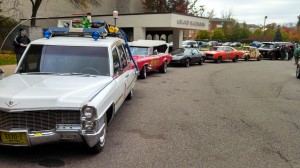 The hotel’s main parking lot was filled by early afternoon, and an auxiliary lot next to the hotel was closed, forcing attendees to park across the street at the adjacent Fairlane Mall. After parking, fans heading into the hotel noticed an interesting array of vehicles parked in front of the hotel, led by Ghostbusters’ Ecto-1, The Monkees’ Monkeemobile, KITT from Knight Rider, and the General Lee from Dukes of Hazzard. Always a popular attraction at other conventions, this was the first appearance for these vehicles at a Detroit Fanfare show.

Lions In The House 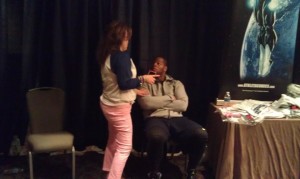 Ndamukong Suh chats with a fan. Photo by Dennis Barger.

Detroit Lions defensive end Israel Idonije was the star of a panel discussing his new comic book The Protectors, from his self-created Athleta Comics publishing company. The comic, written by Ron Marz and drawn by Bart Sears, is based on Idonije’s own idea about a futuristic group of super-powered athletes. Fans had the opportunity to enter a drawing to win copies of The Protectors #0, with the grand prize being two tickets to the Dallas Cowboys vs Detroit Lions game the following day at Ford Field. Idonije’s teammate, fellow defensive back Ndamukong Suh, made an unexpected but brief appearance at the con along with Idonije.

As crowds waned towards the evening hours, several creators spoke positively about the show. “I had a steady flow of fans all day long,” reported writer John Ostrander. “I really enjoyed talking with the fans; this show is small enough to do that. You just can’t interact like that at the big show these days.” First-time guest and Image Comics co-founder Whilce Portacio expressed his like for not only the show, but the surrounding area. And fellow first-timer and veteran artist Franchesco echoed the same sentiments, stating that the show was a nice change of pace from the bigger shows, where he could actually converse with fans without having to shout, despite frequent show announcements over the hotel’s public address system.

The day concluded with a well-attended after-party, in a sharp contrast to the nighttime events of the previous evening. The party played host to the show’s costume contest for adults, but the darkened room didn’t make for all that good an environment for such a contest.

Sunday is slated to be Kids Day at the con, with young attendees encouraged to come in costume and go trick-or-treating among participating exhibitors.