I WILL TELL YOU #59: Earth’s Mightiest Heroes 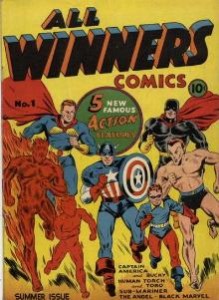 Comics fans have understood the concept of The Avengers for a long time now; the idea, of course, was to bring the individual stars of the Marvel Universe together in one title to form not just a team of superheroes, but an all-star team of superheroes. That idea was hardly anything new or clever when the first issue of The Avengers was published in 1963; DC had done the same thing years earlier with the Justice League of America, and both companies put together similar teams back in the 1940s featuring their big hitters of the day, namely the All-Winners Squad for Marvel, and the Justice Society of America for DC.

The notion of an all-star superhero lineup has the same allure to comic fans that, say, Major League Baseball’s annual All-Star game has to sports fans, or that greatest hits compilations have to music fans: only the best, and all in one package. But, an ongoing comic book featuring a group of all-stars has a unique challenge: it has to stay fresh.

A compilation of a band’s greatest songs is essentially a one-time thing, although record labels historically have tried to package and re-package any given band’s greatest hits in as many ways as possible to try and wring more money from their fans. But no matter how they’re packaged and re-issued, the end result is still just a collection of old songs. And the teams assembled each year for MLB’s annual All-Star game assemble for just that one game; some players will return the following year, others won’t, and others still will join for the first time. The given roster in any given year will not be the same for any other. 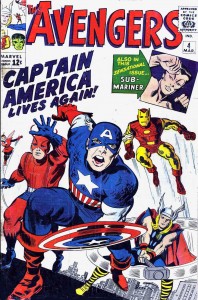 But, characters like Thor and Iron Man aren’t going to retire and go away; they’re here to stay. And The Avengers isn’t a one-time event; it’s a periodical whose audience demands something new every issue. And that’s a challenge every creator, editor, and publisher faces for every comic book they’re involved with. But while an all-star team comic comes with its own set of unique challenges, such a comic also offers a unique opportunity to keep things freshened up. And just what is that unique opportunity, you ask?

I will tell you. Even though I think you already know. 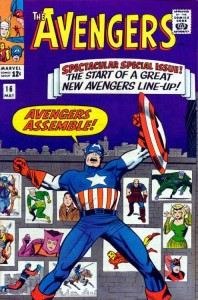 Now, it’s debatable as to whether this should be a crutch for the writer of such a title. If a team title is floundering, adding or jettisoning team members seems like an all-too easy and obvious way to try and fix things. But then again, why shouldn’t the creators involved with such a comic take advantage of an opportunity that only a team book offers them?

History shows that this has been a temptation succumbed to, early and often. The JLA’s membership was toyed with when Green Arrow joined in issue #4. Captain America joined The Avengers in issue #4, as well. Of course, that was after the Hulk departed; in issue #2.

And old time Avengers fans will recall, fondly or otherwise, issue #16 of that title, where the remaining charter members departed and were replaced with Quicksilver, The Scarlet Witch, and of course, Hawkeye.

And Hawkeye, of course, is one of the characters right alongside Thor, Iron Man, Captain America, and the Hulk in the upcoming Avengers movie. See how I made this relevant all of a sudden?

Now, when I first discovered Avengers #16, I was horrified. The Avengers without Thor and Iron Man was like The Beatles without Paul. The Detroit Tigers without Al Kaline. A pizza without cheese. Thor and Iron Man had their own comics; these newcomers weren’t even heroes; they were bad guys, last time I checked. But that wasn’t what bugged me; what bugged me was, I had always seen Earth’s Mightiest Heroes as Earth’s Most Popular Heroes. In other words, if you already had a comic, then you were with the “in” crowd. Otherwise, you should be out. To me, if Hawkeye was going to be in The Avengers, then you might as well let Charlie Brown’s baseball hero Joe Schlabotnik join the American League All-Star Team. 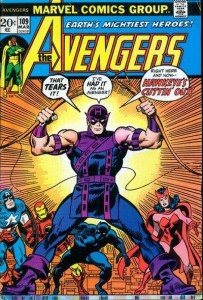 But, as I grew balder and wiser, I came to understand that it wasn’t the membership roster that defined a team comic; it was the creative roster. Even though I missed the presence of Thor and Iron Man, I realized that Stan Lee continued to tell great Avengers stories. I also came to realize that such changes did freshen up the book, and that some of these characters that I would have dismissed at one time ended up becoming some of my favorite characters. 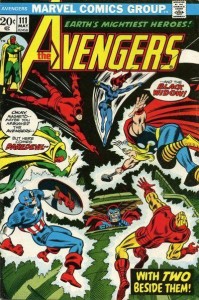 Hawkeye has come and gone from the Avengers over the years, but he’s been around enough to establish a strong enough association. But such isn’t really the case with the one team member from the upcoming movie that I haven’t mentioned yet: The Black Widow. She’s had a brief stint or two in the comic over the years, but among comics fans, she’s definitely not strongly associated with Earth’s Mightiest Heroes.

But, the character has a long history in the comics with Iron Man, which likely got the character a spot in Iron Man 2, and from there the inside track to The Avengers. And there might be some Avengers purists out there who would object, but none so pure that they would voice any kind of objection to watching Scarlett Johansson in a skin tight costume on the big screen.

And over the years, the best storylines in the comic have been the ones where the members of the team, regardless of who they are, make for a team that is exponentially greater than the sum of its parts. And I’ve come to realize that a character doesn’t have to be a demigod or an armored rich guy or a war hero to join The Avengers and make for an awesome adventure.

Because, regardless of their powers, once they join, they become one of Earth’s Mightiest Heroes.