Happy Friday to all my readers!  This week I’ve pulled out The Incredible Hulk # 161, cover dated March 1973, from Marvel Comics.  It has a cover drawn by Herb Trimpe and inked by Sal Trapani, showing the Hulk fighting the X-Men’s Beast, aka Hank McCoy!  The story itself is entitled; “Beyond The Border lurks Death!” and it is written by Steve Englehart.  The comic is drawn by the afore mentioned Trimpe and Trapani, as well. 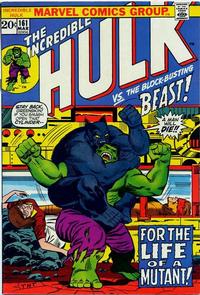 The story opens with a symbolic splash page, then jumps to the Hulk leaping into Canada, somewhere north of the Great Lakes.  Some Canadian Mounties hear the      crash of the Hulk’s landing and rush to see if a plane has crashed, only to find the Hulk!  They foolishly order him to surrender, on behalf of the American Authorities, but you know what follows, don’t you?  The incredible Hulk makes short work of the Mounties in no time at all.

Hulk leaves the defeated Mounties and smashing trees left and right makes his way to a clearing, where he thinks back upon why he is here.  Eventually he is able to piece together the fact the General Thunderbolt Ross and the United States Army had driven him from his quest to find Betty, who he has heard has gotten married.

With the Hulk on the loose, the borders between the United States and Canada have been closed.  And it just so happens that the Beast, in his identity as Hank McCoy, along with his girlfriend, Vera, are in line to cross into Canada.  They are on a vital mission and must reach their destination by the next day, “or the entire world … all of mankind … will die!”, or so says Vera!

As they won’t be allowed to enter Canada due to the closing of the border, Hank transforms into the Beast and carries Vera along with him and past the border guards, leaving his car behind.  They then head for a remote cabin on foot.  Meanwhile the Hulk has discovered that he is weakened and sets out to find out how ands why.  He too heads in the direction of the remote cabin.  See where the story is going, don’t you?

Hank and Vera get to the cabin first, where they find Calvin Rankin, aka, the Mimic, who was last seen in X-Men # 77, cover dated, August 1972.  Apparently, Vera has brought Hank McCoy to Canada to help the Mimic, without his knowing why they were even traveling there!  Maybe a little hard to believe, but a guy will do just about anything to get in good with his girl, so let’s just chalk it up to that!

The Mimic tells them that he feels a change coming on, even though he is in the Canadian wilderness.  He goes on to explain that his mimic powers were given to him by his father and that the X-Men were able to destroy the power, but the powers keep returning, then disappearing, returning, and disappearing over and over and with each return they get stronger and this time its even worse, as he is leeching their power he is leaving their muscles unable to move … including their heart and lung muscles, causing death!

As the Hulk draws closer, he gets weaker and weaker, until right over the isolated cabin, he becomes dizzy and crashes down into the cabin!  Hulk senses that the Mimic is responsible for his condition so sets upon him, only to have the Beast leap upon him to prevent him from doing harm to Calvin!  The Hulk and the Beast tussle for only two pages before the Hulk is victorious!  You didn’t think the Beast could go one on one with the Hulk for long, did you?

The Mimic steps in before the Hulk can do any real harm to the Beast, and uses his powers to absorb the Hulk’s gamma radiation and in the process dies!  The Hulk wonders what exactly is going on; “there’s some crazy monkey-man and somebody with funny glasses (the Mimic) and talk of saving the world … which is pretty important, he guesses” and with those thoughts, he wanders away, leaving Hank and a recovering Vera, to mourn for the fallen Calvin Rankin!

The issue ends on that downer of a note, but all in all, not a bad little one issue story.  Not great story by any means, but far from terrible one, and  Trimpe’s pencils, with Trapani inks, is nothing to write home about, but is serviceable.   Therefore I give this issue only two (2) out of five (5) Legion Flight Rings!  Only for the Hulk completests, but featuring a Hulk versus Beast battle that we are likely not to see again in the Avengers Vs. X-Men series ongoing in 2012!