Can You Buy a Toyota With A Toy Yoda? 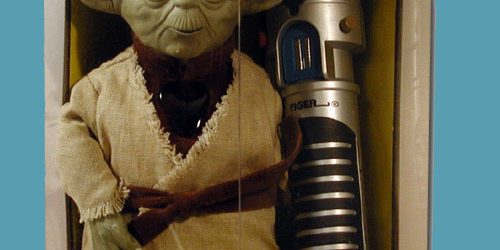 Welcome back to Hammer Drops, where this week we’re departing from our usual format to look at a famous collectibles-related story. Every now and again, the story of the tasteless Toy Yoda/Toyota prank goes viral. When it does, some weisenheimer chimes in saying that the pranked waitress could afford a Toyota today (or more) off the toy. Is that true? In a word, no, but keep reading if you want more details.

The Tale of the Toy Yoda 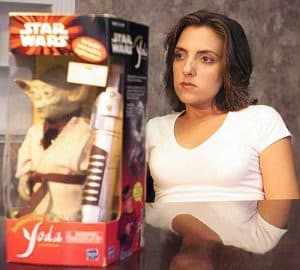 The waitress, Jodee Berry, and her “prize” toy Yoda.

In April 2001, when Star Wars Episode I: The Phantom Menace was still the new hotness and its toys stuffed store shelves. It was in this environment that Jodee Berry, a waitress in a Panama City, FL Hooters franchise, was told of a contest by her employer. Whichever waitress sold the most beer that month would be awarded a “Toyota”. The contest’s prize was always verbally stated, never written down, and the reason for that became apparent when Berry won. She was lead, blindfolded, to the restaurant’s parking lot where a “Toy Yoda” was given to her. Specifically, it was the Hasbro electronic Interactive Yoda with Lightsaber, which retailed for $49.99.

Generally speaking, waitstaff aren’t the most financially well-off people, and a brand new car would be a bit of a life changer. Jodee Berry was not happy with her boss’ idea of a harmless April’s Fools prank. She sued her now-former employer, ultimately settling for…about the price of a nice new car.

Can A Toy Yoda Buy A Toyota?

Let’s look at that question from a few different angles. The first is with the 2000 Interactive Yoda, and that’s a resounding “no”. According to our research, that toy sells new in box for $40 at the most. More often, it sells in the $10-20 range. Even if you choose to be a bit unscrupulous and profit off the shipping, that’s barely affording you regular maintenance on a car. 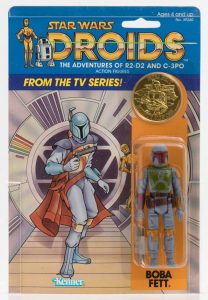 A Boba Fett from the Kenner Star Wars Droids line.

But that did, indeed, get us curious. The oldest Yoda figure in existence is the 1982 Empire Strikes Back carded action figure. Mint-on-card, that figure can sell for as much as $620. That’s a great return on investment for a figure that retailed at $2.49, but it’s a far cry from a new car.

One of the most prized Star Wars toys we’ve ever handled, and one of the most valuable around, is the 1985 Star Wars Droids Boba Fett. Mint-on-card, ungraded, and in good shape, we got $2,300 for one back in 2017. In perfect grade and authenticated, they get up just under $10,000. You could get a used Toyota from this century in that price range, according to Autotrader.

The Lesson: A Single Collectible Probably Can’t Buy a Car

The cheapest you’ll get a brand-new Toyota is a bare bones Corolla at $21,000 MSRP. Collectibles that can command that price alone are few and far between. If they weren’t rare items, they wouldn’t fetch that price! So why are we spending so many words debunking a stupid joke about a twenty-year-old story?

Unrealistic expectations hurt people when they go to sell their collection. Scott Lovejoy, our prank-averse owner here at Back to the Past, tells me it’s just as important to get the unvarnished truth if something has no value, as much as it is to find out something is worth big money. If you walk in our doors with that Interactive Yoda thinking it could be worth $21,000, the reality is going to be tremendous let down. However, getting accurate information is key to making good decisions about what to do with your collectible stuff!

Most of the time, it is the sum of a collection that will bring you the biggest value, not any one item. Don’t just focus on the few gems in the group, but consider the best way to capitalize on the value of the entire collection and you’ll be in better shape. Not sure how to do that? We’re here to help, so if you’re ready to sell, give us a call! If you’re thinking you’d rather go it alone, stay realistic and keep visiting us every Wednesday for more informative Hammer Drops.