The Tale of Abkhazia, Groucho Marx, and John Lennon 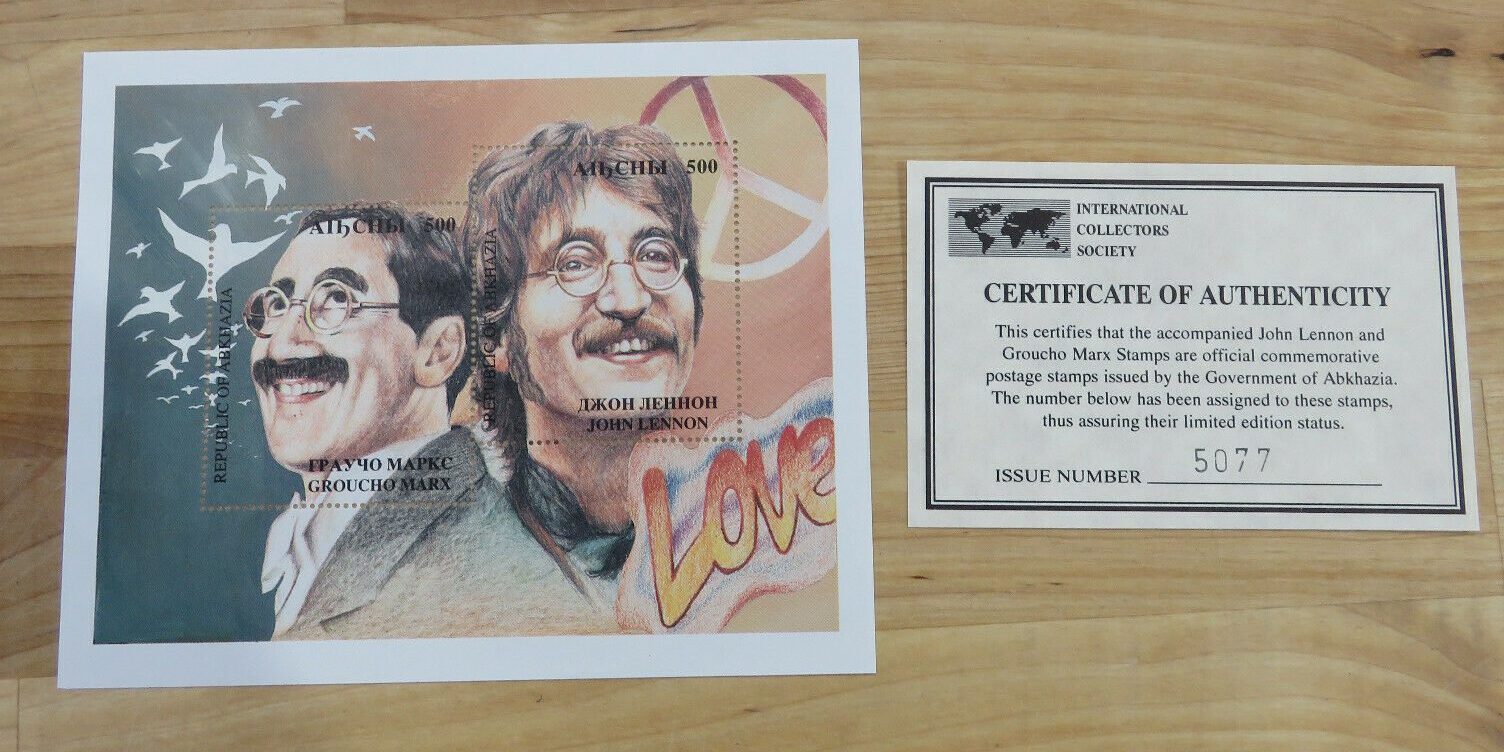 Welcome back to Consigned, Cool, & Collected, where we here at Back to the Past put our usual break-neck pace on pause to really appreciate the cool stuff that surrounds us. Today’s subject is a nifty little stamp set printed in the Republic of Abkhazia. It depicts Groucho Marx and John Lennon.

The Historical Marx and Lenin 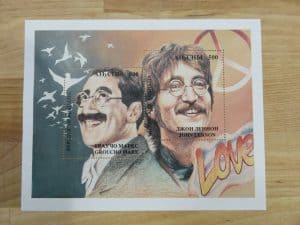 Groucho Marx and John Lennon on stamps from the former USSR.

Explaining jokes always makes them funnier, right? German philosopher Karl Marx co-wrote the Communist Manifesto in 1848. He posited that the world will be vastly improved when the working class rises up and takes control of production away from the wealthy capitalist class. Vladimir Lenin was a supporter of Marx’s philosophy who put it into practice, more or less, after the Russian Revolution. They are two of the most influential figures in the history of the political world, and certainly still controversial today.

The Pop Cultural Marx and Lennon

Groucho Marx is an American comedian whose career began on the Vaudeville circuit in 1909. He and his brothers mixed wordplay with slapstick to create a hit act, one that carried them to Hollywood starting in 1929. Many of their films, including A Night at the Opera and Animal Crackers, are still beloved to this day. John Lennon was a British musician, one who had very little to do with Groucho Marx. He was a member of The Beatles and, together with songwriting partner Paul McCartney and their bandmates Ringo Starr and George Harrison, changed the face of rock music worldwide in the 1960s. They are both Baby Boomer pop culture icons, as Marx Brothers films were favorites of television airings and repertory screenings by the 50s and 60s. 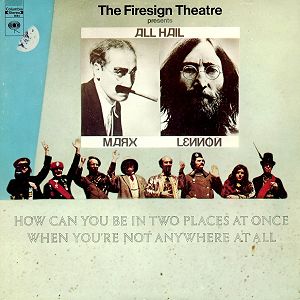 The Marx/Lennon joke being done by the Firesign Theater.

The Marx/Lenin vs. Marx/Lennon gag is not a new one. The most famous example of its use came on the cover the FIresign Theater’s 1969 comedy album How Can You Be in Two Places at Once When You’re Not Anywhere at All. Seen to the right, it mocked the iconography of the USSR’s infamous military parades. Being as they were a countercultural and transgressive comedy troupe, the album cover fit the Firesign Theater’s vibe to a T.

Abkhazia Has An Amazing Sense of Humor Regarding Stamps

So where is the Republic of Abkhazia? Well, it’s a contested state in the nation of Georgia. The short version is that Abkhazia says it is an independent nation while Georgia says it is part of theirs. Either way, both were provinces within the Union of Soviet Socialist Republics from 1922 to 1991. Josef Stalin, ruler of the USSR from 1922 to 1953, supported a campaign of “Georgianizing” Abkhazia. The Abkhazian language was removed from schools, ethnic Abkhazians purged from the government, and they generally became second class citizens in their ancestral lands. That eased greatly after Stalin’s death, but that’s still thirty-some years of Soviet repression.

As such, it demonstrates a tremendous sense of humor for the modern Republic of Abkhazia to print stamps playing on Marx/Lennon vs. Marx/Lenin. Moreover, this set dates to 1994 – only three years after the fall of the USSR!  It seems the Abkhazian people were ready to laugh about their Russian-enforced national heroes, and raise some funds in the process.

This is one of the great joys of this job: the history of the stuff we handle. A Marx/Lennon gag stamp set would be funny, but it being issued by a former Soviet Republic? Amazing. Such little details are why it never hurts to let Back to the Past check out a collection before it goes in the trash – you never know the history hiding behind that goofy stamp or old toy. And come back next Monday for a new Consigned, Cool, & Collected to keep learning that history!