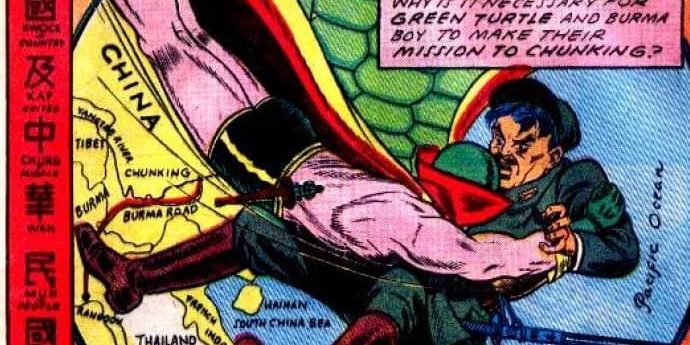 Welcome back to My Hero, wherein we here at Back to the Past identify and ballyhoo the obscure characters from the custom action figure collection of the same name. Years ago, we purchased the life’s work of an artist and comic fan whose chosen medium was granting forgotten comic characters the action figure immortality denied to them by major toymakers and we’re still sorting through it all! We’re doing something special this month, revealing newly cataloged characters from the collection simultaneously on eBay and here on the blog. Today’s reveals are the very first Asian headliners in American comic books: The Green Turtle and his sidekick Burma Boy! 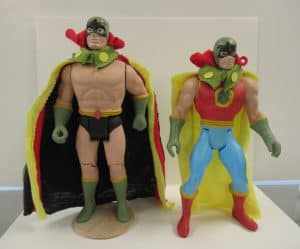 The Green Turtle and Burma Boy as they appear in our Custom Action Figure Collection.

Blazing Comics #1 hit newsstands with a cover date of June 1944, a time when both World War II and the Golden Age of Comics books were in full swing. Due to the war, sidekicks of Chinese descent and villains from Japan were very common but their portrayals leave a lot to be desired to modern readers. The cover of Blazing Comics is a solid example, with a pointy-eared Japanese soldier being pretty graphically strangled. Even so, this series contained something a little different.

The issue’s lead-off story, also its cover story, stars new hero The Green Turtle. The tale opens with a pair of young Chinese citizens being hassled by the Imperial Japanese army over suspicions that they are Anti-Japanese guerillas. Those suspicions are correct and things look bad for the youngsters until the Turtle Plane flies in to rescue them, gunning down the soldiers with “two thousand bullets per minute” in a display The Punisher would aspire to before immolating their reinforcements with the jet’s afterburners. Our hero takes the youths with him to his secret hideaway before setting off to rescue the girl’s father and prevent the IJA from making off with a stash of gold. The boy in the pair volunteers to come with, having vowed vengeance upon the IJA after his father was murdered while being forced to construct a road for their invasion of Burma (known today as Myanmar). This earns the youngster the nom-de-guerre Burma Boy, perhaps the least sensitive name ever given a sidekick. Seriously, it would be like calling Dick Grayson “Free Fall Lad”. 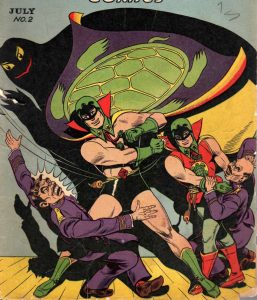 The Green Turtle & Burma Boy on the cover of Blazing Comics #2, the only portrayal of Burma Boy in costume.

The pair are too late to rescue the girl’s father or the gold but successfully engineer an ambush for the IJA convoy carrying the precious metal with some Chinese rebels. Thus was the standard for their adventures set: Green Turtle and Burma Boy use the Turtle Plane and their fists to aid Chinese rebels against the IJA. Interestingly, despite Burma Boy getting his own version of the Green Turtle’s costume on the cover of Blazing Comics #2 (which has been adapted by our customizer), he remains un-costumed throughout all five of their adventures.

Classic comics like these are are a frequent feature of our auctions (though we’re admittedly between Golden Age collections at the moment), so keep a close eye on us if you don’t wanna miss out!

So what sets Green Turtle apart from all the short-lived jingoist heroes of the era? Well, he’s the first Asian headlining hero in comics…probably. Chinese American cartoonist Chu F. Ting created the character and, except for one cover (the same one that gave Burma Boy a costume), the hero’s face is very deliberately never shown in any of his stories. These two facts lead fans and comics historians alike to believe that Green Turtle, hinted to be American, was meant by his creator to be Chinese American. Actively highlighting that fact would have been too controversial in the 1940s, but it is the best explanation for the character’s unseen face. Modern Chinese American writer Gene Luen Yang ran with that theory in his 2014 mini-series The Shadow Hero, which gave Green Turtle the origin story he never received in the Golden Age. He’s a very cool character with some historical significance behind him but is suitably obscure that customizers are your best bet for putting him on your shelf. And if you’ve got collection like it – be it original art, custom action figures, convention sketches, whatever – and are looking to sell it, we would love to help you! 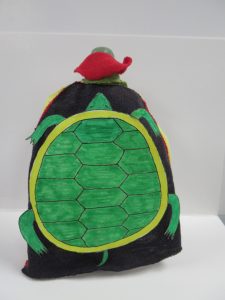 Our customizer even nailed the character’s elaborate cape!