Cerebus the Aardvark # 4: A Retro Review

Today I bring you Cerebus the Aardvark # 4, cover dated June 1978, from Aardvark Vanaheim.  The little independent comic that just wouldn’t go away!  Dave Sim began this comic with a one page submission, showing a funny aardvark character bouncing up and down on a horse, riding into a town, drawn in a very poor imitation Barry Smith (before he began going by Barry Windsor Smith) style (i.e. swipes).   Sim drew up the page and submitted it to Gary Friedrich for possible inclusion in his new “overground” Quack series.  Needless to say, Friedrich turned it down and the rest is, as they say, is history, as Sim decided to publish the character himself and expanded the page into a full story! 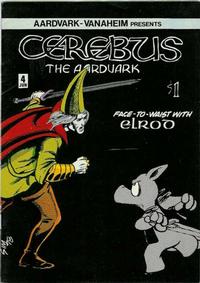 And just a few issues later, after first introducing Red Sophia in issue # 3, Sim, in the story, “Death’s Dark Tread”, in issue # 4, introduces Elrod, the Albino!  He is first heard saying; “Stand — I say — stand aside.  Make way, boy — make way for — Elrod the albino!”   Of course you need to say these words aloud and in your best Foghorn Leghorn voice to truely appreciate the entrance!   And there he is, towering over Cerebus in his great big pointy hat!

Sim has been quoted as saying that sometime while he was drawing issue number three he “suddenly started laughing hysterically” and when asked what the problem was, he managed to gasp; “Elric, picture Elric saying ‘Mind yo’ mannuhs, son, I’ve got a tall pointy hat!”  And from that moment, Elrod sprang to life!  He then became a long standing character, that Sim had return again, and again, throughout the three hundred issue run that was Cerebus the Aardvark!

After Elrod introduces himself to Cerebus with a; “Why, hello there short, grey and fuzzy — you have a thing for crushed velvet?”  since Cerebus had been knocked over into a fabric merchants stall.  Elrod goes on and on for a couple of pages and Sim uses the original line he came up with; “Mind your manners, son! I’ve got a tall point hat!  Status boy!  You can argue with me, but you can’t argue with status!”  So true actually!

Cerebus chooses to simply walk away, causing Elrod to challenge him to a sword fight, wherein he draws his black sword, Seersucker!  Which causes Cerebus to think; “Tarim, who would believe a sword could get rusty enough to turn black?”  If you have read Michael Moorcock’s Elric series of books, you’d would certainly appreciate Sim’s ‘use’ of Moorcock’s Elric in his own Elrod!  What’s even funnier is that Elrod’s Black sword Seersucker shatters upon Cerebus’ unnamed sword the first time they clash together!

It is at this moment that the cities’ guards approach the two, mistaking them for merchants, and explain that there is no loitering on the avenues.  Elrod reacts with a; “Hang on a chicken-plucking minute!  Who are you calling a merchant, dung face?  We’re warriors! The mightiest swords in the Southlands!”  Where upon, they are both arrested for being foriegn/alien warriers, thrown into the cities’ dungeons and chained to the walls of said dungeon.

While Elrod works on a foolproof escape plan, Cerebus uses his utmost strength and manages to pull the chains from the wall and then leverages the cell door open.  All this time, Elrod has kept up a continious solioquiy going.  Cerebus then proceeds to escape from the dungeon, leaving the still continiuosly talking Elrod behind.  The last we hear from Elrod is; “Nice boy, but he’s got an attention span of an overripe grapefruit!”  I don’t know about you, but I loved the humor in this comic and Sim had plenty more to come over the next twenty, or so years!  To this day, I find that I must say Elrod’s lines out loud, to get the most enjoyment from Sim’s characterization of this character!

The origianl books are expensive, but this story, as well as, issues one, two and four are available in Swords of Cerebus Vol. 1.  There’s been a number of reprintings over the years, as Sim has strived to keep the books in print, through what has become known as ‘phonebooks’ due to the size  In fact, here’s a picture of the first  printing of Volume 1. 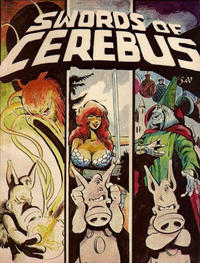 Dave Sims early artwork was pretty ‘rough around the edges’ and it was really just swipes of Barry Smith’s Conan the Barbarian, but over time he really did develop into a pretty good artist, one with his own style!  And to think, that this basically self published comic lasted for three hundred issues, blows the mind!  But from humble beginnings, came this classic!  But because Sim’s art was still in its infancy at this time, I will have to withhold a full five Flight Ring review rating, and give it just four (4) out of five (5) Legion Flight Rings.

It’s a great series, and a far cry from all those super-heroes, we all so love, but this is truely a wonderful original character, with a large and superb supporting cast.  It’s well worth picking up and checking it out, in all it’s long run glory!  Early issues are expensive, but later issues are very reasonable and the ‘phonebooks’ are the best value of all.