If you’ve been reading DC Comics for the last few weeks, you might have noticed a strange shadowy figure lurking around the sidelines of the action.  Who is this mystery woman and what’s she doing in the new DC universe?

Here’s part 1 of 4 columns dedicated to tracking this person and deciphering what her intentions might be!  Note that there may be some spoilers from either the panels shown or our commentary about the art, so if you don’t want anything spoiled, read your comics before reading the rest of the column!

Kicking off, here were the original two sightings, from Week “zero” when just Flashpoint #5 and Justice League #1 shipped: 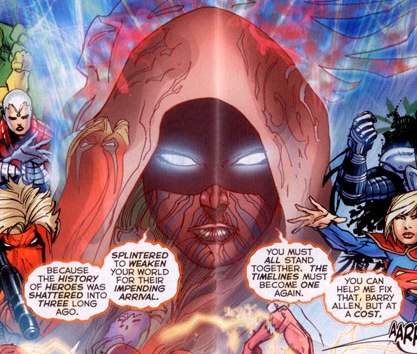 This remains the only point at which she communicates directly with another character, here explaining to Flash how the three universes or timelines (DC original, Wildstorm and Vertigo) are coming together again.  Does he remember this, and will it come into play in Flash #1?

Also from this image, we can say she wears a hood, has luminous eyes, and overall glows red.  This will continue to be true throughout the rest of her appearances so far! 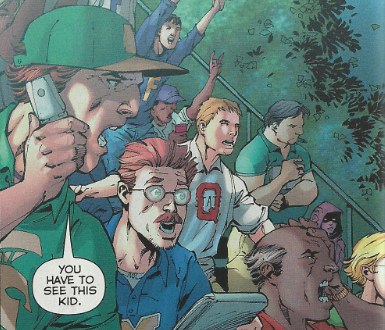 Our next sighting comes in the pages of Justice League #1 at a Mumford vs. Ford football game where Vic Stone (Cyborg) is playing.  Is she a football fan?  And, if so, does she know how the Lions are going to do this year?

Moving on to the first comics ship week in September, here are her appearances throughout all thirteen titles:

In Action Comics #1, she appears right in the middle of the action as a subway car is about to be seriously derailed. Saved at the last minute, of course, by Superman.  Is she on the subway because she can’t afford cab fare?

By contrast, in Animal Man #1, we catch sight of her in a hospital just *after* the crisis has been averted.  Maybe due to using public transportation, she was running late. 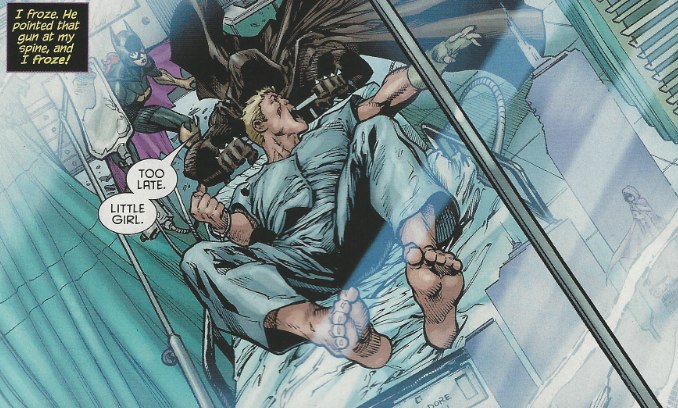 It took me a while to find the Mystery Woman in Batgirl #1, since we seem to be seeing her reflection (washing out the glowy red appearance) as she once again watches a crisis in progress.  I think by this time we can safely conclude that she is strictly here to observe, because she hasn’t lifted a finger in any of these tragic situations.

The Mystery Woman has no trouble traversing the continent to show up in Africa in Batwing #1! 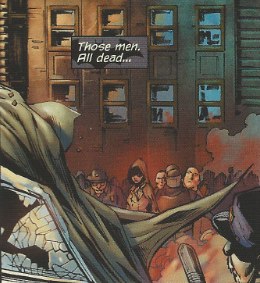 Here she is, back in Gotham City, observing the Batman in the pages of Detective Comics #1. 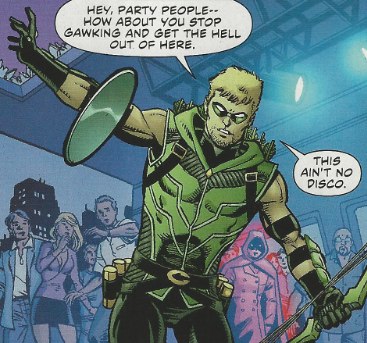 Ollie suggests this ain’t no disco, as the Mystery Woman looks on from the nightclub crowd in Green Arrow #1.  But, can she bring sexy back?

In Hawk and Dove #1, we start to wonder if anyone can actually see her?  In all previous cases, she was more or less using the cover of the crowd – but here we see three people walk right past her without commentary.  If you walked past someone glowing red in a hooded cape, wouldn’t you react? 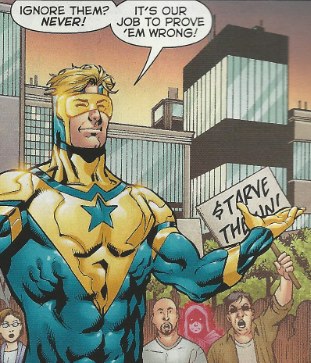 Once again relatively obscured by the crowd, the Mystery Woman takes a look at Booster Gold in Justice League International #1.

Here’s another odd place for the Mystery Woman to be standing, as nobody seems to notice she is there in Men of War #1.  Then again, most of them are scrambling for their lives, so a lack of observational skills is understandable. 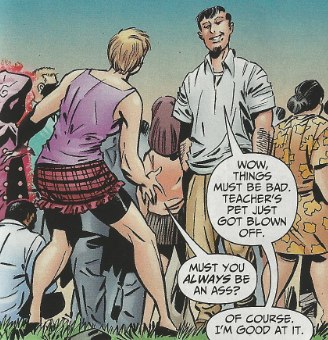 Yeah, crowd of people = Mystery Woman once again in OMAC #1.  Is this by design, or is it just where our comics artists are deciding is the easiest place to drop her into a panel?

Hm, the creep factor is on the rise as we catch the Mystery Woman peeping into this family’s window in Static Shock #1.

When a glowy red person is lurking down the alley, it’s not a bad idea to form a Wolverine fist with your keys.  Apollo doesn’t seem to care in this panel from Stormwatch #1.

And finally, we wrap up with Mystery Woman’s sighting in Swamp Thing #1.  What’s strange about this is that it’s in a remote location, nowhere near where anything odd or violent has taken place, so she’s apparently not *always* observing a crisis.

That’s the whole round of appearances from the NEW DCU Week One!  We’ll bring you the next collection of appearances once we digest the events of Week Two, coming soon.

We’d like to know who you think this is, and what she’s doing lurking around the DC Universe – let us know in the comments.