Drag Me to Hell is a Tale of Two Movies 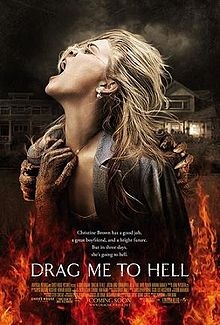 Drag Me to Hell is a 2009 supernatural horror film written by Sam and Ivan Raimi. It was directed by Sam Raimi, the writer and director of The Evil Dead, Evil Dead II and Army of Darkness.  It stars Alison Lohman and Justin Long and has an approximate running time of 99 minutes.

I don’t really remember this movie coming out. I recognize the name, but I knew nothing of this movie before sitting down to watch it. When I realized this was a Sam Raimi project, I was all in. I just knew it would be campy, fun and completely insane. I was only about 50% correct. Drag Me to Hell in a nutshell is about a young woman with the crappiest luck ever. Christine Brown (Lohman) is a young up-and-comer at her bank and she’s shooting for the Assistant Manager position. She’s in a heated battle with co-worker Stu Rubin (who’s kind of a major douche bag) for the position.

An old gypsy woman comes in and asks Christine for a third extension on her loan, but she needs approval from her boss. The boss leaves it up to her and she denies the old gypsy the loan in an attempt to impress her boss. The gypsy begs and gets all grabby so Christine calls security and has the gypsy escorted out. The old bag of bones is waiting for Christine in the parking garage and the two throw down. The ruckus ends with the gypsy woman ripping a button off of Christine’s coat and places a curse on her. That is when Christine’s life really starts to suck.

The fight between the gypsy and Christine is classic Raimi. It is over-the-top and entertaining as hell. The weird part is the typical Raimi camp is tossed out the window at this point. We get a straight horror movie with all kinds of implied danger and supernatural shenanigans. There are some really great moments and others that suffer from sub-par effects, but I think Raimi succeeds with his overall vision.

The odd part is once we get into about the last half hour (that’s just an estimate) it turns into the movie you’d expect and love to get from Raimi. The action, dialogue and cinematography all get a heavy Army of Darkness vibe to it. It was really weird going from one extreme to the other, but it worked for some reason in Drag Me to Hell.

If you haven’t seen Drag Me to Hell yet, I suggest you do. It’s a pretty solid horror movie that finishes with a heavy dose of campy fun. It’s like getting two movies in one! It may not be the greatest example of Sam Raimi’s work, but it gets the job done.