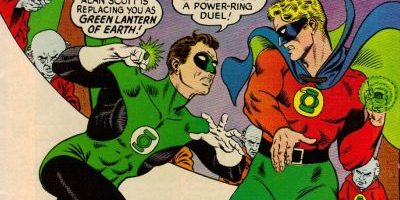 Howdy campers!  For this week’s RETRO REVIEW, I’ve visited the D C Comics annex of my extensive collection and brought to light Green Lantern # 40, cover dated October 1965!  This comic features the first Silver Age team up of the Silver Age (SA) Green Lantern, Hal Jordan and the Golden Age (GA) Green Lantern, Alan Scott!  Previously the SA and GA Flashes had met in the SA’s Flash’s comic, and of course the characters had met in the Justice League of America’s annual Earth One and Earth Two, JLA/JSA team-ups!

The cover of this momentous event was provided by the book’s regular artist, Gil Kane, with inks provided by Murphy Anderson, a very nice pair indeed!  Here’s the cover in question: 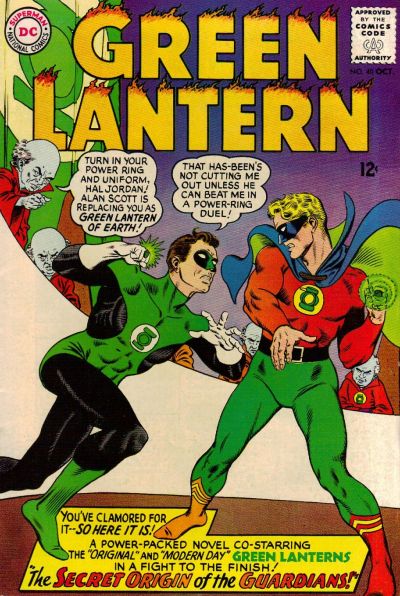 And besides the first time the two characters team up in the Silver Age, as you can see by the cover, this comic also contains “The Secret Origin Of The Guardians!”  Wow, all this for only 12 cents!  Man I love my childhood!  I could buy eight (8) comics for less than a dollar and have change for a couple pieces of penny candy!

But back to the book at hand.  The comic is also entitled; “Secret Origin Of The Guardians!”.  It was written by John Broome and drawn by Gil Kane, with the interior inks provided by Sid Greene.  And for those keeping track, the editor was none other than Julius Swartz!  The comic begins tracking Alan Scott, with his friend Doiby Dickles, at a party relieving their lives of twenty years before.  Alan was a radio announcer and Doiby was a taxi driver, driving a cab he called “Goitrude”!

The GA Green Lantern decides to go to Earth One and tell his friend Hal, so that hopefully he two can seek out the meteor and have his ring overcome it’s weakness, as well.  You’d think Alan Scott would have collected the meteor and taken it to Hal, but nope, he rushes right through the dimensional barriers to seek out Hal.  Once in our universe, he discovers that his ring is not longer able to affect wood.  Hal suggest Alan ask the ring what exactly happened when the meteor passed though it’s beam.

The ring then proceeds to tell the story of the origin of the Guardians of Oa and one of their own, Krona, who became a villain, for insisting on discovering the very beginning all of the universes!  The Guardians defeat him and imprison him in an energy prison, which they send traveling through the endless universes!  Yep, you guessed it, it was that energy prison which passed through the GA Green Lantern’s beam, not a meteor!  And the act of doing so sets Krona free!

Somehow he merges with Alan’s ring and then when he passes through the dimensional barriers, he is able to free himself and once again sets out to discover the beginning of the universes!  Krona sets off a series of disasters on Earth One keeping both of the Green Lantern’s busy, then he swoops in and takes over the GA Green Lantern’s form and uses it to take control of the Guardians!

Of course, the GA Green Lantern manages to contact the SA Green Lantern and Hal, using his ring merges Alan’s mind with his own and together they defeat Krona and save the universes!  All in a days work at D C Comics back in the sixties!