The Woods Aren’t Just Made for Camping 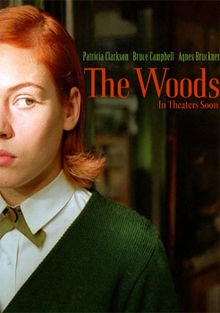 The Woods is a supernatural horror film from 2006. It was written by David Ross and directed by Lucky McKee. It stars Agnes Bruckner, Patricia Clarkson, Rachel Nichols, Lauren Birkell and Bruce Campbell. It has an approximate running time of 91 minutes.

I’ve said it before and I’ll say it time and time again. I’m a sucker for movies about witchcraft. That being said, I probably liked The Woods a little bit more than I should have. It’s set in 1965 and takes place at Falburn Academy, a boarding school for young ladies. Our main character and young pyromaniac, Heather Fasulo, gets enrolled into this school by her mother and father for being a problem child. She’s having a hard time adjusting to life and quickly makes a friend (Marcy) and an enemy (Samantha).

The movie gives us a teen drama mixed with regular doses of creepy witch stuff for the most part, without leaning too heavy on either. It’s not until the final third of the film that things really kick into gear in terms of the supernatural horror goodness. Through a series of odd events Heather figures out what shenanigans the faculty of Falburn are up to and she tries to get out of dodge, only to end up right in the thick of it.

The thing about The Woods is that there aren’t really any moments that I can particularly say were awesome or crappy. It almost feels like it played it pretty safe and was unwilling to go balls to the wall when they could have. I don’t know if that’s a good thing or a bad thing in this case, because it could most certainly have made this movie great or completely ruined it. The one thing that did stand out was the fact that Bruce Campbell played it straight and that’s always weird to see. It wasn’t bad, but it’s just not what I’m used to.

I’d say The Woods is a nice little movie to watch on a rainy day if you don’t have anything else on your “to watch” list. Maybe it’ll leave a stronger impression on you than it did me, but I’m willing to say that people who aren’t as interested in witchcraft movies might not like it as much as I did.