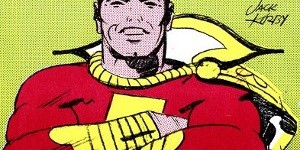 Happy Friday everyone!  And to start off the weekend, I bring you a new Fabulous Find!  Number twenty-six if you’re counting.  This week I’ve dug out some early Comic Reader fanzines from my collection.  I don’t have a complete run but I do own each issue from number ninety (90) to the end of it’s run with issue two hundred and nineteen (219).  I also have four (4) additional ones, numbering in the eighties.  So I thought for today I’d talk about issues before and including issue number one hundred (100)!

Issues # 83 and 84 feature nice Marvel Comic characters drawn by artist, Rich Buckler.  As you can see, # 83 features the Mighty Thor and # 84 features Captain America, Hawkeye & Iron Man of the Avengers!  You can also see from the masthead that the fanzine is not primarily The Comic Reader, but billed as Etcetera & The Comic Reader!  This is because at this point in time two separate fanzines had joined together to become one.  I should also make mention that during this period The Comic Reader was edited by none other than soon to be professional writer, Paul Levitz! 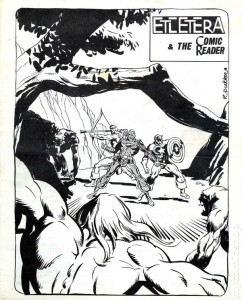 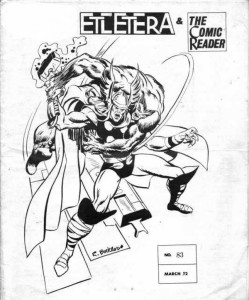 Etcetera was a general comic fanzine, while The Comic Reader was primarily a newszine!  But together they made a very nice little fanzine which brought the best of both worlds to the average fan who had discovered the world of fanzines!

As with all issues, there was news from the major comic book companies of the day, but primarily Marvel and DC Comics.  Issue number 83 brought news of a new comic book that would be out soon, called; The Demon.  Yep, that was the original book by Jack Kirby.  They also reported on a possible new Challengers of the Unknown comic, also by Kirby, but as we know, that never materialized.

They also listed upcoming comics, with a story blurb and sometime creator lists, like you would find today in Previews.  Issue 83 had a couple of columns, as well.  One named; The Wandering Fan, which was written by Tony Isabella!

Issue number 84 reported that William M. Gaines, formerly the publisher of the EC line of comics had joined National periodicals (i.e. DC) as a consultant.  There were sometimes ads, but not too many!  This issue announced the 1972 New York Comic Art Convention that was to take place over the Fourth of July weekend that year.

Next up is The Comic Reader # 94, cover dated February, 1973.  It has a nice cover of the character Ironwolf by his creator, Howard Chaykin!  Ironwolf was published in three issues of Weird Worlds, issues 8, 9 & 10, published by DC Comics later in 1973 and ’74. 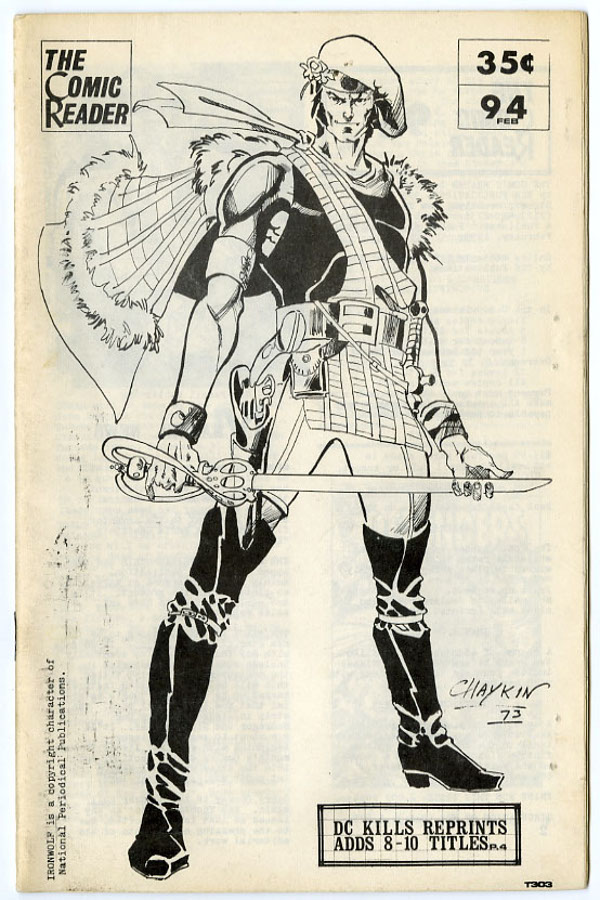 As you can see by the cover above, by this time the fanzine was just The Comic Reader!  Etcetera was also publishing under int’s own name once again.  But the Comic Reader still featured all the news that Levitz could secure about the comic book companies, as well as, information regarding upcoming releases.  In the Marvel news section, it was announced that The Black Panther would star in his own series in the comic entitled; Jungle Action!  Over in the DC news section, they announced the coming of … Prez, and of course that the cover character, Ironwolf would be found in Weird Worlds!

They now included a Warren news section, as well as, a catch all section, entitled; Et Al.  Here Levitz mentioned the play, WARP, that Neal Adams had designed the scenery and costumes for.  For the record, WARP went on to become a comic book, published by First Comics.  As and aside, I saw the play performed when I lived in Chicago back in ’77 or ’78.  I think I still have the Playbill filed away somewhere.  Oh, who am I kidding?  Of course, I still have it!  Maybe I’ll pull that out for a future Fabulous Find!

Fan Liam O’Connor rounds out the issue with a couple of fanzine reviews of Sense of Wonder # 12, and Capt. George’s Whizzbang # 14.  And things are wrapped up with a few ads, for Etcetera, The Buyer’s Guide, as well as, the first Maryland Minicon!

Issue number ninety-nine (99) brings fandom the first view of a character that Walt Simonson has revived for DC Comics, The Manhunter!  Check out the cover right below: 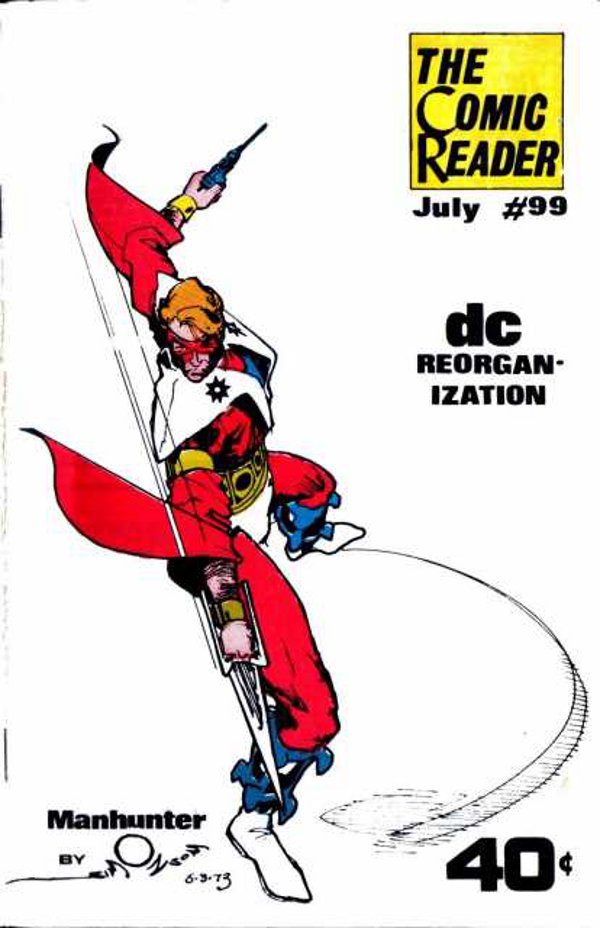 As you can also see, this issue featured the first use of color on the Comic Reader’s cover!  It may have been a test for the very next issue, as you’ll soon see.  Then is was many issues later before color was seen again on one of their covers.  The lead story, as you can see, was about the latest DC reorganization and how they were going to be publishing a number of 100 page super-spectaculars!  Comics planned in this format included Detective Comics, where the Manhunter would see the light of day!

Worth noting, was an underground comix column by Bill Loudin.  Also this issue featured a comic strip entitled; Miracles, which put the Peanuts characters in super-hero costumes.  Snoopy invaded the “Crabby Goodness Puppy Farm” and Peppermint Patti in the Big Barda role and costume!  Obviously, creator, Carl Gafford, was a fan of both Charles Schultz and Jack Kirby!  I’m also sure his use of these characters was not authorized!

Which brings us to the double-sized 100th issue.  This issue sports a wrap-around cover done by Jack Kirby, showcasing Superman, Captain (Shazam) Marvel, Batman and Captain America!  Take a look: 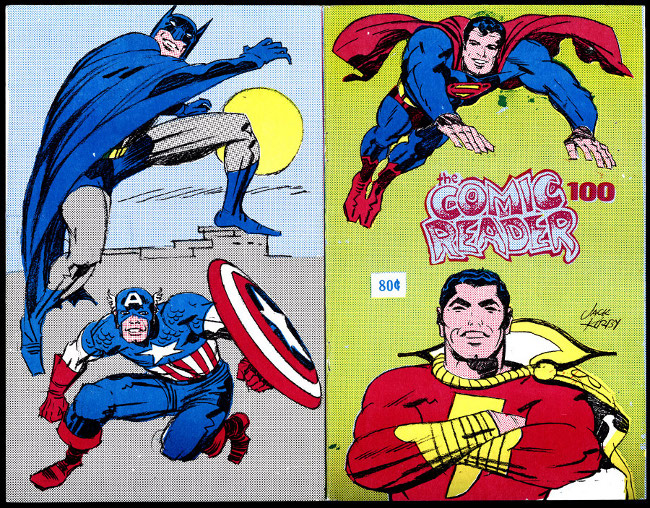 As with previous issues, this issue features lots of comic company news and plenty of up-coming comic information, including lots of up-coming comic covers from the Big Two!  Of special note was the look behind the scenes at The Comic Reader, entitled; True Confessions!  Included in this issue is a “frame” that can be cut out, and caricatures of The Comic Reader staff to put into the frame!  Of course, this would entail cutting up the issue, so needless to say, I never did!

An ad for Etcetera # 4 was included in The Comic Reader # 100, as well.  Another underground comix column by Bill Loudin was included, as was a new feature, entitled; the History of Fandom, which was written by super-fan John McGeehan!  This was the longest column/feature to date, four full pages!  Also well worth mentioning was the article, entitled; Rogue’s Gallery, which gave a one page history of The Comic Reader itself!  Discussing it’s origin with the man who is credited with creating comic fandom, Detroit’s own Professor Jerry Bails!

The Comic Reader had come a long way, from it’s beginnings, by Jerry Bails, that began within the pages of the fanzine,  Alter-Ego # 1. Later is was, for a time called; On the Drawing Board, and then was published together as Etcetera & The Comic Reader, as I noted earlier.  And there were still an additional one hundred and nineteen issues to come!

So expect a follow up Fantastic Find on later issues down the line!

This is Greg Turner saying … Be Seeing You ….