Trashman is a rare underground superhero created and drawn by Spain (a.k.a. Manuel Rodriguez) who appeared regularly in underground comix and magazines from 1968 through 1985.  Trashman’s first appearance was as a full page serial comic strip in the New York City underground newspaper, the East Village Other.  After Spain moved from New York City to San Francisco in 1970, three full length Trashman: Agent of the Sixth International stories were published in Subvert Comics from Rip Off Press from 1970 to 1976.

This edition of Fabulous Find focuses on The Collected Trashman, which collects the East Village strips.  It was likely published in 1969, according to some sources, or in 1972, according to others.  My copy is not dated, not are any, so your guess is as good as mine!  But either way, here’s the cover: 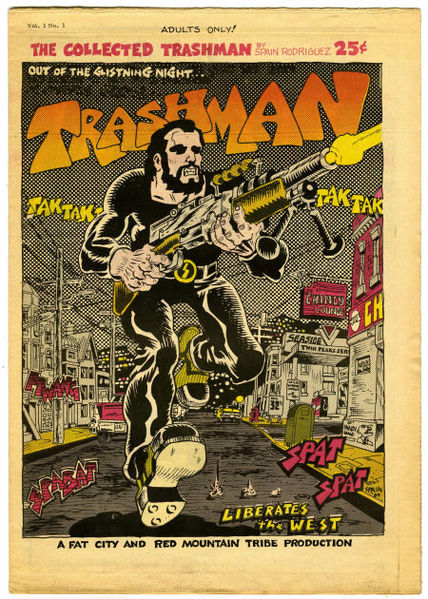 Trashman is a hero of the working classes, and champion of the radical left causes. The Trashman stories are set in a dystopian “near-future” America, which after having been ravaged by nuclear weapon attacks, has become a fascist police state, with “vast urban conglomerations.  Mild mannered, auto mechanic, Harry Barnes, turned to a life of petty crime after finding his wife murdered in their home by Gestapo-like soldiers. As Barnes flees capture by the police, a mysterious stranger in a hooded robe, calling himself “Citizen X”, appears and leads him down a hidden passageway to a secret underground installation. There Barnes is told he was chosen by the mysterious and elusive “Sixth International”, an underground anarcho-Marxist organization, to be trained as a master of the “para-sciences” and use these powers to fight the oppression of the fascist governments of the world.

Harry Barnes is taught to “change his molecular structure, or decipher a crack in the sidewalk.” to quote from Trashman’s first comic strip in the East Village Other.  Trashman’s powers include superhuman strength, stamina, speed, agility, reflexes, equilibrium and durability. He is not invulnerable to harm, but his powers usually enable him to avoid being wounded or killed by conventional weapons. He also has the ability to “shape-shift”, or alter his shape and molecular structure to any desired form, including non-organic ones.  He retains his mental abilities even while shifted, and can change back to human form at will.

Trashman also has a power called “Random Alert Factor”, based on the fictional “science of numantics”, very similar to Marvel Comics‘ Spider-Man’s spider-sense!  One of the principles of numantics is that from observing “random” phenomena, “a general pattern may be deduced.”  For example, on the inside back cover artwork of Subvert Comics #1, Trashman “hears” a crack in the sidewalk “speak” to him, warning him of an attack from behind. Strangely, Trashman’s powers are diminished when he is exposed to an atmosphere lacking in a certain level of pollution.

Contemporary social issues are manifested in the pages of The Collected Trashman.  Trashman is defintely a blue-collar hero and “champion of the radical left, defending the impoverished masses against the tyranny of the fascist military forces of the rich and powerful”.  He is a rugged militant leader dressed in black, wielding a machine-gun, whose jaded and mysterious eyes are always receded in shadow. Trashman’s strength and power to overcome a myriad of oppressive forces (from the police/military to the “Fighting She-Devils”) is rooted in his keen insight and sensitivity to the universe around him.

The Trashman series is one of the very few super hero stories depicted in the underground comix of the 1960s and 1970s, particularly as a recurring character. Trashman’s post-apocalyptic setting and Marxist-anarchist overtones expressed Spain’s own social and political beliefs, as well as the sensibilities of the anti Vietnam War movement and the underground counterculture of the times!  Like many underground comix, the Trashman stories are replete with graphic depictions of violence, sex and profanity, which were all but unknown in super hero comics back in the day!

I actually was first “introduced” to Trashman, within the pages of Subvert Comics, and I like them better than these earlier, East Village Other strips, reprinted in The Collected Trashman.  But this is where Spain began, so it seemed like a good place Fabulous Find.  And for your viewing pleasure, I also show the covers to the three issues of Subvert Comics. 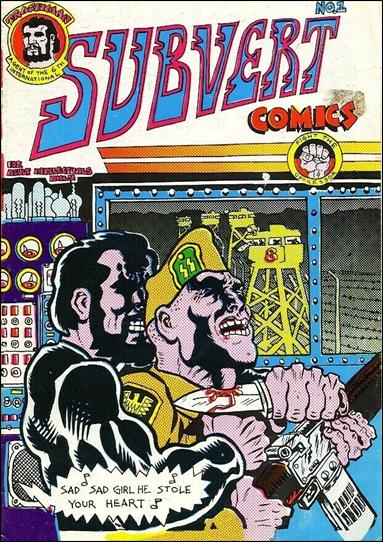 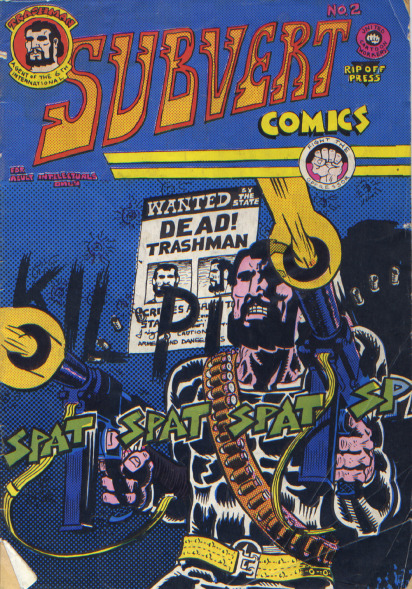 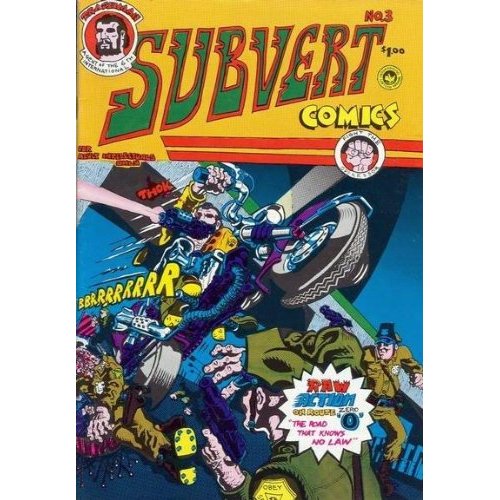 I also am very sad to report that Spain Rodriguez recently passed away, at the age of 72, after a long battle with cancer.  But his creation, Trashman, lives on and is out there for you to discover, if you haven’t already done so!