I WILL TELL YOU #68: Merry Pop Culture Christmas!

I WILL TELL YOU #68:
Merry Pop Culture Christmas!

But first, just a normal but jolly Merry Christmas, one and all! There’s no place I’d rather be!

Now, lest you think this is some kind of misguided attempt to relive my childhood and be up and wide awake at 7AM on Christmas morning, I will tell you that, through the magic of technology, this column is going live while I am still dead to the world. Sound asleep, that is, with those visions of sugarplums still dancing in my head. Or maybe, it’s that echo of spiked eggnog now pounding on my head. Either way, Santa has come and gone, and I slept through it, just like I’m supposed to.

I will ask you, however, why you are up on Christmas morning reading this column, instead of sleeping in or enjoying your presents, but be assured that I’m grateful nonetheless. Once I awaken, I will lounge around most of the day like many of us, until it’s time to have some dinner with the fam later on. And while lazing around, on the one day where little is expected, I will probably read some comics, watch some movies, and engage in other pop culture related laziness.

Which is nothing new, for it’s been this way ever since I got into comics, which was, gasp, 35 years ago. No, there’s some magnitude there, so I’d better spell it out: thirty-five years ago. No, that still doesn’t convey that massive enormitude of time. Now about this: THIRTY FIVE FRICKIN’ YEARS AGO. Yeah, that gives it some heft. 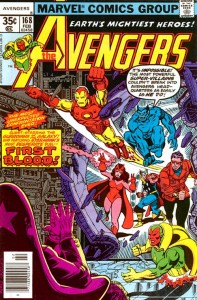 Avengers #168, 1977 – The comic that started an Avengers comic buying frenzy that consumed my Christmas vacation that year.

Yep, it was 1977. I had started reading comics on a regular basis just before Thanksgiving that year, when I purchased, as has been mentioned elsewhere ad nauseum, Avengers #168, the second part of Jim Shooter’s Michael / Korvac epic. It featured what many, myself included, consider to be the definitive Avengers roster, not to mention the Guardians of the Galaxy (the real GotG, kids), and it was drawn by George Pérez at the peak of his career. If there was ever a comic to hook a 14-year-old kid and reel him in for life, it was this one. 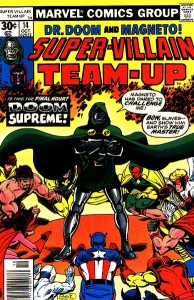 And after Thanksgiving that year, I discovered another awesome comic, Super Villain Team-Up #14, which featured those very same Avengers on the cover, on their knees, bowing before none other than Dr. Doom, who I knew of already because of his role as villain in the first comic I ever bought that past summer: Marvel Comics Super Special #1, featuring KISS. What a small world, I thought. But a big enough one to give me my first nerdgasm. I bought that SVTU comic without a second thought.

And then, just before Christmas that same year, I discovered a stash of then relatively-recent Avengers and Super Villain Team-Up comics at a local used bookstore. Avengers #152 – #160 and SVTU #9-#12, if you want to know, plus a few other comics. And the timing couldn’t have been better, because with Christmas vacation upon me, it was the most opportune time to devour those comics over and over. And over. And over again.

Which I did. I remember that far more vividly than I do Christmas morning itself, for it felt like Christmas came early once I discovered all those wonderful comics that forever shaped my comic buying tastes.

That was probably my favorite of all pop-culture Christmases, but it wasn’t the first. The very year before, in fact; before I got into comic books; I was heavily into MAD. As in, magazine. I had been a faithful follower of this hilarious mag for a couple of years at this point. And that Christmas morning, I received the coolest gift a MAD fan could ever hope to receive: the latest issue of the MAD Super Special. These Super Specials were typically a compilation of past issues but always featured a bound-in bonus, such as stickers, mini-posters, a record, etc. And this particular issue featured the coolest bonus of all: a copy of a comic book called The Nostalgic MAD, which itself was a compilation of several features from the mag’s old incarnation as a comic book in the 1950s. 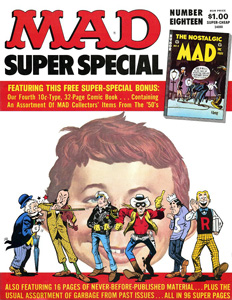 I’d say I was blown away, but I wasn’t just blown away. I was blown away, in that backwards-somersault, out-the-door-with-shoes-flying off kind of way. I was absolutely incredulous with the fact that, not only had MAD been around since the 50s, but that it wasn’t always a magazine. It used to be a comic book. A comic book. I couldn’t believe it. I had read the odd Archie or Gold Key comic over the years, but this bound-in reprint compilation was the first time I had really become fascinated with comics, and the comic art form. I spent that whole Christmas vacation scrutinizing that one comic. 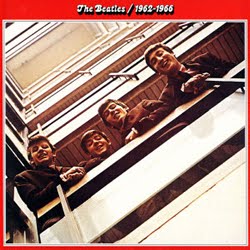 Also important to note: that very same Christmas in 1976 was when I first got exposed to The Beatles, in the form of their so-called Red Album, which collected the greatest hits from the early half of their career. This was the other too-cool gift I received. I never looked back from this, either, and have been a fan of the Fab Four ever since.

That was my second-favorite, but first-ever pop culture Christmas.

And there have been others, unrelated to comics or music. My dad and I started a tradition back then of going to the movies on Christmas Day, to get out of the house so Mom could prepare Christmas dinner without the two of us getting underfoot, trying to sneak a taste of dessert, etc. In 1977; yes, that same Avengers Christmas; Dad and I went to see Star Wars. In ‘78, it was Donald Sutherland’s version of Invasion of the Bodysnatchers. Now there’s something to get you in the holiday spirit. In ’79, the first Star Trek movie. In ’80, Flash Gordon. We didn’t repeat the tradition in the following years for whatever reason, but those years that we did made for some great memories, and a few more Merry Pop-Culture Christmases. 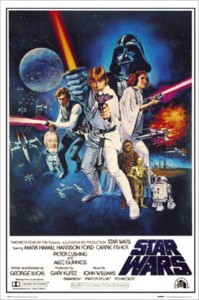 Star Wars was still playing come Christmas Day, exactly seven months after its release. Unheard of, even in those days.

It subsequent years, there have been other enjoyable such Christmases. Star Trek movie marathons. Star Wars and Lord of the Rings marathons. And other miscellaneous extended viewing and / or listening sessions, based on whatever was found under the tree that year. 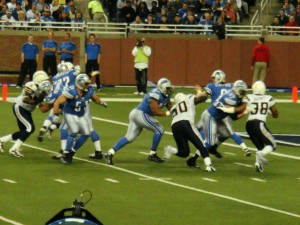 And on rare occasions, there has even been a football game or two to watch or even attend, on Christmas Eve or Christmas Day. Hey, sports are part of pop culture, too.

So, whatever you do this Christmas, while you either await the holiday feast or are sitting back and letting it all digest, I wish you all a very Merry Pop Culture Christmas. I’m hankering to commemorate the 35th anniversary of my favorite one with a good helping of The Avengers.