“We ate the food, we drank the wine. Everyone was having a good time,
Except you. You were talking about the end of the world.”
Lyrics © U2, 1991

Hey. You’re still here. Looks like we all are. 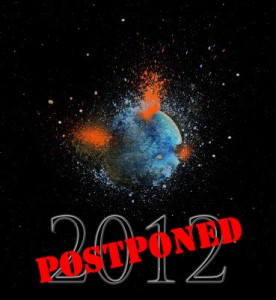 The End Of The World – Coming Soon

So we all survived another apocalypse that never was. We’re all getting pretty good at this. In fact, we’re so good at it, we forget that we’ve survived the end of the world countless times before and don’t even remember it. The last time that comes to mind, in fact, was just last year, when some Christian radio broadcaster foretold that the world would come to end on May 21, I believe. Actually, it might not come to mind for most people, for despite the inexplicable amount of media coverage this guy got for his prediction, most have largely forgotten. It’s funny to point out, though, that when everyone pointed out to this broadcaster that he was wrong, he denied it and said despite how it seemed, it was indeed the end of the world as we know it. 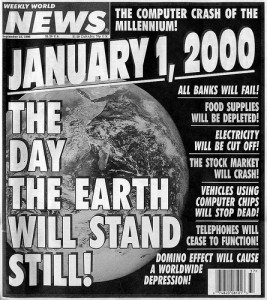 These tabloids are always wrong, so no one should have ever worried about Y2K.

Well, I feel fine. I did then, and I do now. What’s also funny is how many now look back at another crisis; actually, the Y2K non-crisis; and retcon that whole thing from a technological uncertainty into a prediction of a worldwide apocalypse come January 1, 2000. But there was none. There were no planes falling from the skies, or missiles launching by themselves, or VCRs blinking 18:88 that hadn’t been already. There wasn’t even any money wantonly spewing from ATM machines. Sadly.

Doomsaying numerologists spoke of a similar thing on 9/9/99. And I seem to recall something about an alignment of all nine planets in 1982 would tear the earth apart. And I have a distant recollection of thinking that the world would come to an end if I didn’t eat my vegetables or brush my teeth. According to my mother, anyway.

Oh, and there was the Mayan prophecy that stated the world would end . . . approximately four hundred years ago.

I’m not making that up, either. Although I deliberately misused the word “prophecy”, the same way that many have been ever since this whole thing started getting some momentum.

Now that the game is up and we’re not dead and we can start looking forward to the next non-apocalypse, the truth can be told. A little bit of research goes a long way towards explaining what the Mayan calendar really said, but no one who went through the trouble wanted to spoil everybody’s end-of-the-world excitement. But the truth is, the Mayan calendar has reached the end before; the last time being the aforementioned 400 years past, give or take. Just like it has every 400 years prior.

There is no prophecy, any more than we have a “prophecy” that the world is going to end every New Year’s Eve. The Mayans never said it was going to be the end of the world. The calendar simply ends. And when our calendars all reach December 31, do we all disappear? Does the earth explode? Does everything go white?

And that’s it. No apocalypse. No prophecy. It’s just time to hang a new calendar on the wall.

It was fun while it lasted, though; fantasizing about what we would do if, um, we were all dead.

But since we’re not, it’s probably good to step back and look at exactly why it’s still good to be here. The reasons why it’s good to be alive are too numerous to list, of course, so I’ve saved you all the trouble and boiled them down to the top five. What are they, you’re, um, dying to know? I will tell you, right here:

Of course, had the world ended, it would have spared us some heartache, too. So to be fair, I also present: 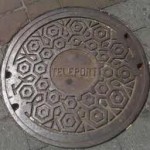 Top 5 Reasons Why We Wish The World Had Ended Yesterday

So what about you? Why are you glad you’re still here? Or why are you sorry?

Let us know. In the meantime, I’m going to start planning for that comet that supposed to hit the earth in another 15 years or so.