Greetings fellow comic fans and welcome to another edition of Greg Turner‘s Retro Review!  This week I’m looking at D C Comics‘ The Fury of Firestorm, The Nuclear Man numbers three (#3) and four (#4).  Issue number three was cover dated August 1982 and number four is cover dated September 1982, therefore both these books were on sale during the summer of 1982.  The first Firestorm, the Nuclear Man comic was published, dated March 1978 and was created by writer, Gerry Conway and artist, Al Milgrom.  This series only lasted five issues and was a causality of the infamous DC Implosion!  Issue number six (#6) was actually published/included in DC’s Cancelled Comic Cavalcade.  But needless to say, most of us fans never saw this published story.

But in 1982 DC decided to revive the comic and the new series; The Fury of … was begun.  So what’s so special about Firestorm?  Well, for one, he’s not merely one being with superpowers, nor is he one human being!  That’s right, Firestorm is two “normal” human beings when non-powered, who combine to become the hero, Firestorm!  Hope I got that right, Doug!  Firestorm is actually Physicist/Professor Martin Stein and teenager/student Ronnie, or Ronald, Raymond!  Previously their origin has been told where high school student, Ronnie Raymond and Nobel Prize winning physicist, Martin Stein were caught in a nuclear accident that allowed them to fuse into the “nuclear man” Firestorm.  And since Stein was unconscious at the time, Raymond is basically in charge when they are Firestorm, with Stein simply a voice “of reason” inside the mind of Firestorm!  After the accident, Firestorm began defending New York City, where Ronnie lives. 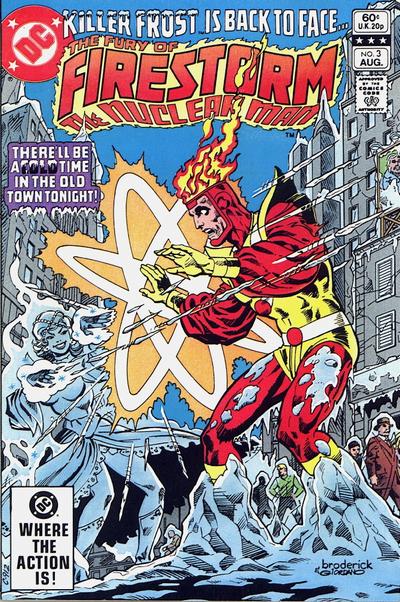 The story this issue is entitled; “A Cold Time In The Old Town Tonight” and it is written by Gerry Conway, pencilled by Pat Broderick and inked by Rodin Rodriguez.  The story is twenty-five (25) pages long.  With that background information (I almost sound like Dave, don’t I?) issue number three starts off with Firestorm searching for a pair of murdering muggers.  The scene then switches to the villainess of the book, Killer Frost, as she escapes from her trial (see Justice League of America # 195 – 197) and ices over all of New York City!  Meanwhile Ronnie is having difficulties with his friends, Doreen and Jackson and with his father, to top it all off!  Ronnie changes to Firestorm and ends up on a barge in the Hudson River complaining/whining to Stein in his head.

It’s at this point that Stein points out that New York City has been completely iced over and Ronnie rushes to find out what’s going on!  He soon discovers Killer Frost is behind it!  He finds her holding the mayor of New York, as well as, some others, hostage!  Frost threatens to kill her hostages unless Firestorm bends his knee to the new Queen of New York!  And that’s where issue three leaves off.

Issue # 4, gives us another cool (pun intended) cover, again drawn by Broderick and Giordano, with the added coolness of adding the Justice League of America to the affair! 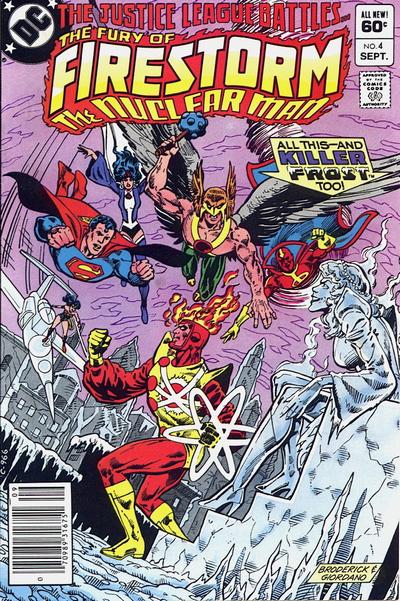 The story is entitled; The Icy Heart of Killer Frost!” and is brought to us by the same creators as the previous issue; Conway, Broderick & Rodriguez!  The story begins with Firestorm in the thrall of Killer Frost and he is forced to do her bidding to keep the mayor of New York City and her other hostages safe! While on her mission, the Justice League swoops in and confronts Firestorm.  And yes, you guessed it Firestorm is forced to battle the Justice League!  In fact we get a five page battle, with Firestorm facing off against Superman, Wonder Woman, Hawkman, Zatanna and the Red Tornado!  Soon, Firestorm admits he needs some help and reveals his dual human form to the Justice League.  The League take Firestorm up to their orbiting satellite and they form a plan where by Firestorm will return to Killer Frost with the Red Tornado, in disguise!

She tries to freeze the disguised Red Tornado, but as he’s not human, her powers don’t work on him and together, Firestorm and the Red Tornado overcome Killer Frost and rescue the hostages!

I’ve never been a huge Firestorm fan (sorry, Doug) but I think Conway and Broderick did a nice job on these two issues, that picked up on a plot line from an earlier Justice League story and then incorporated the Justice League nicely into the Firestorm book!  And I’m sure it was also a way to increase sales in a new series.  I also think Pat Broderick is an under appreciated talent and he does a fine job with Rodriguez’s inks!  Certainly not a classic story to be remembered always, but still a tight story with pretty decent art that you won’t be sad to add to your collection!

This is Greg Turner … be seeing you …