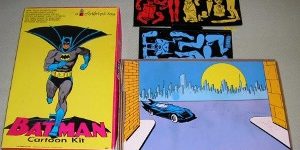 It’s back to 1966 with this week’s Fabulous Find.  And I’ve been favoring Marvel Comics the last couple of months, so it is only fair to look at a DC Comics collectible this week.  As I’ve written before, 1966 was the year of the Batman.  And there was a plethora of merchandise with Batman’s face and figure splashed across it.  And we young kids couldn’t get enough.   This week I dig out my Batman Colorform set from that very same year, 1966. They were produced by the Colorforms Corporations in conjunction with National Periodicals (i.e. DC Comics).

For those that are not familiar with Colorforms, a quick history lesson.  Colorforms are sheet-thin, die-cut vinyl pieces, in colorful geometric forms and shapes, often with over-printed images that are to be attached to a smooth plastic laminated cardboard background, much like placing paper dolls against a paper backdrop. The pieces stick to the background without chemical or static adhesion, and in a secure, but non-permanent manner when a vacuum is created between the two polished surfaces, holding the piece in place. The Colorforms vinyl pieces can then be repositioned on the board a virtually unlimited number of times to create new designs and scenarios.

Colorforms were the creation of Harry and Patricia Kislevitz in 1951 and were developed to aid in children’s dexterity.  The original Colorforms sets were spiral-bound booklets hand-assembled by the husband and wife team in their New York city apartment. The first 1,000 sets were sold to the FAO Schwarz toy store. Shallow boxed sets containing screen-printed, die-cut pieces, and illustrated backgrounds began appearing shorty thereafter.

Here is the outer box lid to the 1966 Batman Colorform set: 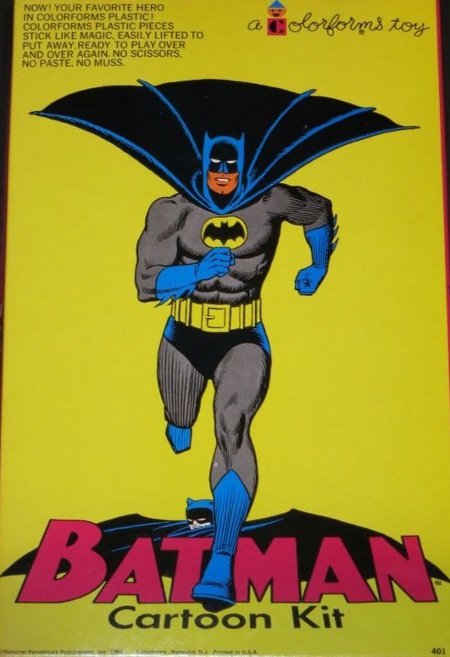 I do not know who drew the cover, but the artist did an excellent job of capturing Batman running towards the buyer. As nice as the lid is, it’s the insides that contained all the fun for children of all ages.  Well, maybe children up to ten or so.  Though I still feel Colorforms are fun, but maybe not to play with.

Here is the interior of the Batman Colorform playset: 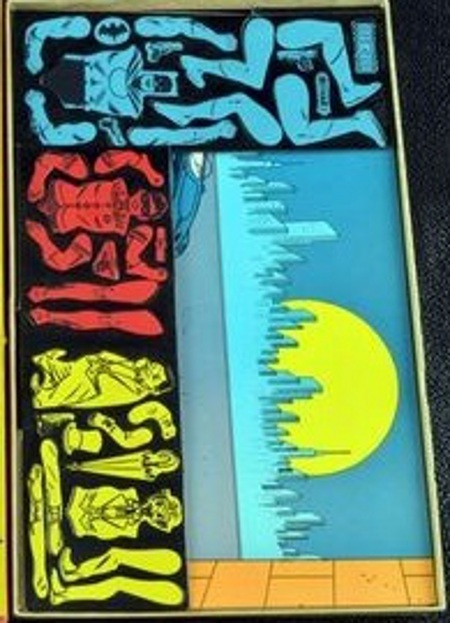 Hopefully you can see that the playset is the Gotham City background with the Batmobile in the foreground.  And of course, there is the pieces of the characters.  First in blue, is Batman, with a few arm and leg choices, as well as, some bat accessories.  And yes, those are guns, not batarangs included.  I guess DC Comics didn’t take too close a look at what they allowed companies to produced based on their characters back in 1966.

Next in red, is Robin, again he has a couple of choices in the arm and leg department, and just a couple of accessories.  And finally in yellow, you get, the Penguin and the Joker, perhaps Batman’s two greatest foes!  It looks like P & J only have one set of arms and legs.  And the villains get Penguin’s top hat and umbrella and a gun for the Joker, I’d guess.

The set came with one additional component, a small booklet, with lack of a better explanation, instructions.  Here it is, though my pic is pretty small:

And there you have it, a cutting edge Batman toy of 1966!  Did any of my fine readers own one of these back in the day?  If so, do you still have it?  Probably not, or if you do, it’s missing some of the small pieces, especially the some or all of the accessories.

That’s it for this week’s Fabulous Find, but please come back next week for another RETRO REVIEW.  I’ll be here and hopefully you will be too!  Be seeing  you …