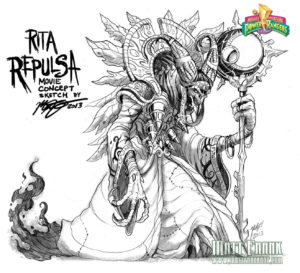 Welcome back to Scripting Errors, where we look at movies that might have been! Since it would be a little shill-y to talk about the about the Power Rangers movie currently in theaters (especially so soon after Kong: Skull Island), we instead take a look at a 2014 draft of the script.

Max Landis, son of John and writer of films like Chronicle, American Ultra, and Victor Frankenstein. As mentioned, this draft dates to 3/25/2014 – just shy of three years to the day before the final film hit theaters. This article is illustrated with art by comic artist Matt Frank, who actually did a Rita Repulsa concept for this script. The rest is thematically appropriate stuff from his DeviantArt page. 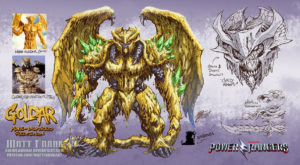 Jason Scott, Billy Cranston, Zack Taylor, Trini Kwan, and Kim Hart are high school seniors in the city of Angel Grove. While once close friends, they’ve all regretfully drifted apart over the years – until they get caught up in an alien invasion. Now they’ll have to set aside their differences to help onetime space cop Zordon repel the villainous Rita Repulsa and her gang The Dominators, lest Repulsa’s attempts to escape destroy the planet.

This script is pretty great, in my opinion. It’s much more elaborate than the film we got, with a lot more action pieces, classic characters, morphed fights, etc. Unfortunately, that’s probably why it didn’t get made – I’m no expert, but I’d guess Max Landis’ vision would require an Avengers-level budget and that’s more than two times what the movie currently in theaters cost. 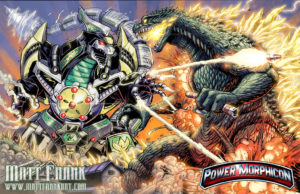 No relation to the script, but this Dragonzord Vs. Godzilla was too cool not to use.