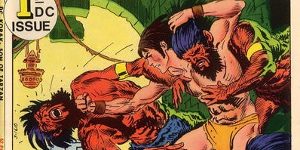 Welcome back RETRO REVIEW fans!  This week it’s time to look at another DC Comic book, so I’ve ventured into deepest, darkest Africa and returned with Korak, Son Of Tarzan # 46.  Even though the issue is numbered 46, it is the first issue to be published by DC Comics.  The first forty-five (45) issues were published by Gold Key. This issue is cover dated June 1972 and is a 52 page giant.

Here is the cover, as pencilled and inked by Joe Kubert: 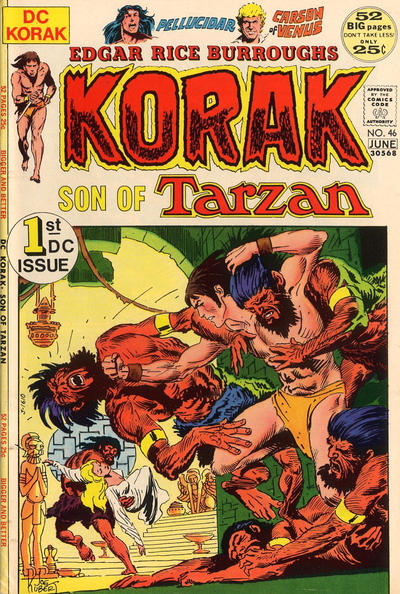 The issue in front of us features an eighteen (18) page lead story featuring the title character, Korak, Son of Tarzan.  The story is written by Len Wein, with pencils and inks, both, by Frank Thorne.  It is entitled; “The Treasure Vaults of Opar!”.

The story opens with an aircraft crash that is witnessed by Korak.  He is able to pull the occupants from the plane before it goes up in flames.  The people are on the way to find the Lost City of Opar, where Joyce Kingston’s father is being held prisoner.  Her father is an archaeologist, who was leading an expedition to find Opar, and he has not returned or sent any word on his progress.  Apparently, other members of the crashed party may not have the same reasons for finding the city.  They have in mind to get rich on the rumors of gold and diamonds to be found in Opar.

Korak agrees to help them, but while advancing towards the city, they are attacked by the Beast-Men of Opar.  Joyce is kidnapped and taken to the lost city.  Korak leads the rest of the plane’s survivors to the city and they attempt to rescue Joyce.  But appearances are deceiving, and Joyce appears to be more interested in the riches of the city and turns against Korak.

Slowly the members of the search party are killed off and with Korak’s help, Joyce and her brother are the only ones left alive to escape.  But Joyce turns back to recover her jewels and is trapped in the city, maybe even crushed beneath tons of gold.  The story ends with Korak carrying Joyce’s brother back to civilization.

There are two other stories in the comic, as well.  The first features the Edgar Rice Burroughs’ hero, Carson of Venus.  The story is entitled; “Mars — Or Bust!” and it is also written by Len Wein, but the pencil and inks are supplied by Mike Kaluta.  The story runs just nine (9) pages and it is a beauty!  It retells the Burroughs’ prose story entitled; “Pirates of Venus” and stars Carson Napier.  Who with the help of his friend, Jimmy Welsh, launch a rocket towards Mars.  But miscalculations occur and instead of reaching Mars, Carson finds himself on Venus!

This is just the opening chapter of what will be twelve part storyline that runs through Korak #s 46 through 56 and reaches it’s conclusion in Tarzan # 230, cover dated January 1974.  In fact, Kaluta eventually becomes both writer and artist before the run is completed.

The third and final story is; “The World Within”.  It stars the Edgar Rice Burroughs’ hero, David Innis, and features the interior world of Pellucidar as a backdrop for adventure.  This story runs ten (10) pages and is written by Len Wein with both the pencils and inks done by Alan Weiss.

This first installment explains how Innis reaches the world of Pellucidar, which is located deep within the Earth. With the help of Professor Abner Perry, they develop a ship that can drill down into the Earth.  Both men then set off to test their drill ship but they lose control of the drill and believe they will die, until they break through to Pellucidar.  This first episode has them exploring the world of Pellucidar, or at least the part where they have landed.

This would be the only issue of Korak that the Pellucidar series would appear.  But beginning with Weird Worlds # 1, cover dated September 1972 the series would continue there.  The Pellucidar series ran through the first seven issues of Weird Worlds, as well as that first DC issue of Korak.  That seventh issue was cover dated October 1973, for those of you keeping track.

Of note, is the fact that one additional Pellucidar story appeared in Tarzan Family # 66, cover dated December 76. But this issue was written and drawn by a new writer and artist.

Hey, that’s it for this week’s RETRO REVIEW, but please come back next week for a new Fabulous Find.  Peace!