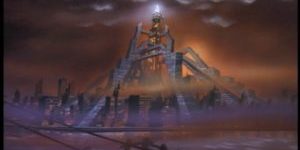 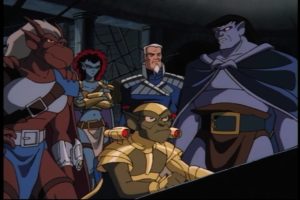 Welcome back to Strange Times & Places, where this week we’re watching the best cartoon of the 1990s, Gargoyles, one and only venture into the genre of possible futures – season two, episode forty-three, “Future Tense”.

It’s a For Want of a Nail possible future, a cyberpunk dystopia with a heaping helping of Imaginary Story in the final act 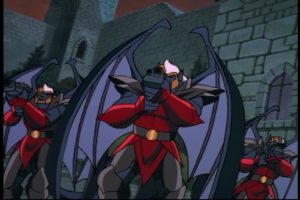 Goliath, leader of the eponymous Gargoyles, is still mystically traveling the world on the Avalon World Tour alongside his love interest, daughter, and dog. It appears their party has finally returned home to Manhattan, but it’s forty years after they left and things have gone to crap. His nemesis, Xanatos, has conquered the island and declared a sovereign nation. He controls it from his massive fortress with an army of cyborgs, clones, and mutates, ineffectually pestered by the remaining few remaining Gargoyles and their allies. Goliath’s band of travelers will need to join the resistance’s last, desperate push to prevent Xanatos from extending his reach over the entire globe…but not everything is as it seems.

Nothing that’s not fixed by it being all just a dream…or is it?

It totally is, as series producer Greg Weisman (also responsible for the Spectacular Spider-Man and Young Justice cartoons, as well as a co-plotter on the fantastic Captain Atom comic series of the late 80s) has made public his plans for a spin-off set in a more distant future influenced by but decidedly less bleak than this episode.

Come back next week for the latest installment of Tokusatsu Gesundheit!