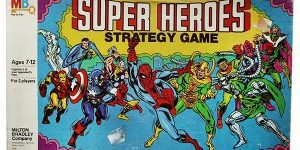 Here we are, once again, on a fabulous Friday, therefore, it is time for another Fabulous Find.  And this week, I have dug around in the comic vault and pulled out another one of my cool board games.  This one is from 1980, and is the Marvel Comics Super Heroes Strategy Game.  It is brought to us by the Milton Bradley Company, in conjunction with Marvel Comics.  As the box states; it’s Super Heroes versus Super Villains in an exciting battle of wits!

Let’s take a look at the fabulous game box cover: 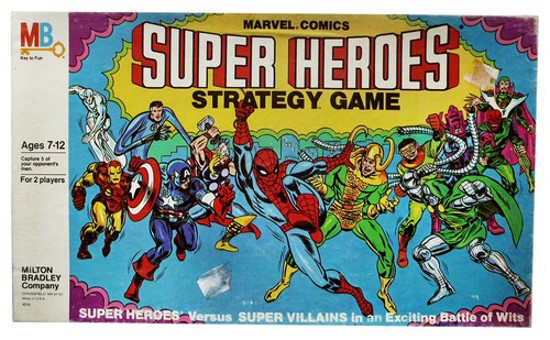 My box is not in perfect condition, as it’s got a tear on the longer top side and a split corner at the bottom right corner, but it displays very nicely never the less.  So what about the game itself?  How do you play?

From the inside of the box cover … “Plot, plan and place your pawns strategically!  That’s the key to winning this exciting chess-like game of dueling super heroes and super villains.  You and your opponent maneuver the marvelous Marvel Comics characters into strategic positions on the gameboard city so you can trap and capture each other’s pawns.  One player moves the six super heroes with the the red pawn bases; the other player moves the six super villains with the black pawn bases.  Prepare to battle!  Advance from dot to dot on the gameboard … corner and capture your opponent’s man.  Two of your pawns can even become powerful super pawns if they break through enemy ranks to the opposite side of the gameboard!  To be a winner, you must capture five of your opponent’s men.” 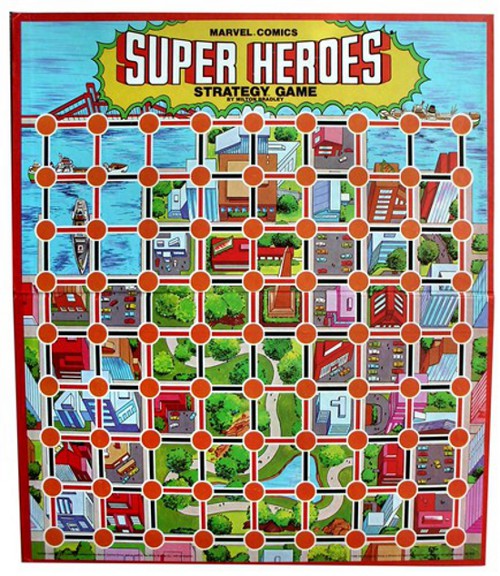 There are some other specific rules that you can read about in the instructions which are printed on the back of the board game’s box lid.  It explains exactly how to capture your opponent’s pawn, etc.  I found one rule to be rather humorous.  When you move your pawn into position where you could capture the opponent’s pawn on the next move, the player must exclaim; AH-HA!  This is similar to saying check in chess.

Here is the interior of the game box, showing nice graphics of the Marvel Comic characters utilized in the game, as the pawns: 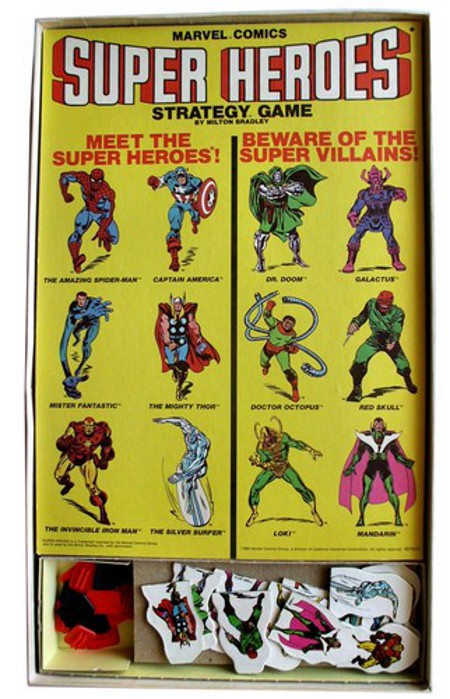 And here are my game pieces (pawns), scanned a little closer, for your viewing pleasure.  First the super heroes: 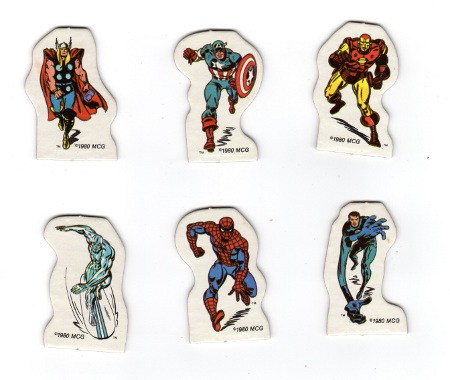 Next up are the super villain game pieces (pawns): 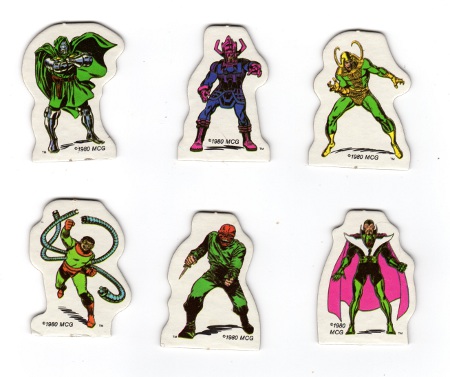 Again, as you can clearly see, the villains are represented by Doctor Doom, Galactus, Loki, Doctor Octopus, the Red Skull and the Mandarin.  Obviously the villains were selected as the arch enemies of the heroes.  Thor & Loki, Captain America & the Red Skull, Iron Man & the Mandarin, Silver Surfer & Galactus, Spider-Man & Doc Ock and Mr. Fantastic & Dr. Doom.

All in all, a great line up of both heroes and villains, though I might have selected the Green Goblin over Doctor Octopus, but why quibble?  And I’m not sure if I’ve ever seen the Mandarin where that costume, it almost looks like it belongs on the Sub-Mariner villain Attuma, at least in my opinion!

I still love idea of this game, thirty-seven years after it was released.  Great box graphics and really cool game pieces/pawns.  And needless to say, I’m no longer in the recommended age bracket of 7 – 12, as seen on the box top!  The artwork appears to be by Marvel artists, rather than some Milton Bradley artist.  You can see Jack Kirby, John Romita and even, John Buscema figures used as game pieces.  Nice!  If you have a chance, I’d recommend you picking up this game and adding it to your collection if you ever get the chance.

And that’s all for this week’s Fabulous Find, but I’ll be back next week with a new RETRO REVIEW.  Please plan on joining me right here!  Be seeing  you …