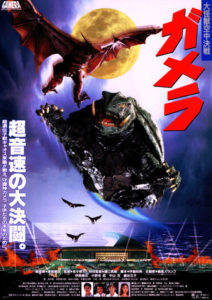 Welcome to Tokusatsu Gesundheit, where today we’re getting away from the venerable studios of Toei and Toho for the less moneyed flicks of Daiei. In particular, we’re watching the serious 1995 reboot of their goofy Gamera franchise, Gamera: Guardian of the Universe.

First, a Japanese ship transporting tons of uranium runs aground a mysterious, free floating island. Then, a group of giant bird-like reptiles start annihilating small villages on outlying islands. These two strange phenomena converge during an attempt to capture the bird creatures, when the “island” comes ashore as a giant turtle monster! As Japan’s scientists struggle to figure just what these creatures are and how they’re connected, the Japanese Self Defense Force is taking unprecedented moves to kill them – but is it wise to kill creatures we don’t understand? 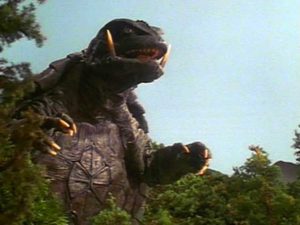 Gamera was created by the film studio Daiei in 1965 in order to get some that sweet giant monster movie money that Godzilla was bringing in hand over fist. The franchise proved fairly successful, producing seven films in as many years. It didn’t save the studio from bankruptcy, and it ended alongside the studio in 1971. That was basically the last word on the franchise, save for a 1980 movie assembled from existing footage, until the mid-90s Godzilla resurgence prompted the rights holders to make this movie.

This movie is pretty great. It gives a strong, if fantastical, explanation for its monsters that pegs them somewhere between “unknowable beasts” and “bestial superheroes” (the two extremes of the genre) to great effect. Doing so sets it apart from the contemporaneous Godzilla and Mothra films, carving a niche for itself that feels unique. Definitely worth watching.