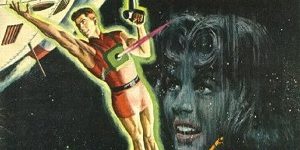 It’s time for another RETRO REVIEW of an independent comic book.  And just this week, I was given a copy of Magnus, Robot Fighter # 13, from my cousin’s son.  I unfortunately had to make a quick trip to Kentucky for a family funeral, but did return with a couple of comics that had once belonged to my cousin, that I will add to my collection, and am proud to do so, even though they are not it the best condition.

So let’s jump right into it, shall we?  The comic is cover dated; February 1966 and was published by Gold Key, a division of K. K. Publications, Inc.  The cover looks like this: 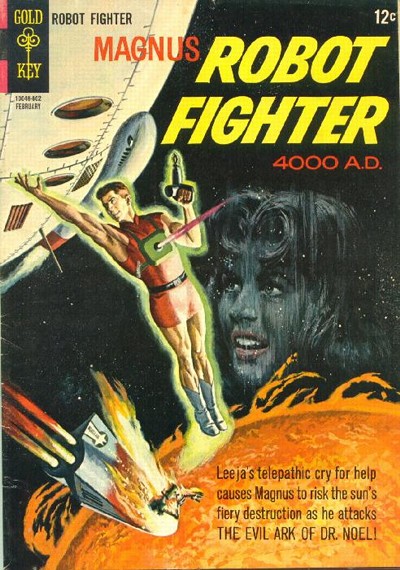 It is pencilled, inked, then painted by artist; George Wilson.  The story within is entitled: “The Evil Ark Of Dr. Noel”.  It is written by Herb Kastle, with both the pencils and inks done by Russ Manning, with assists by Mike Royer.  The story runs a full twenty-four (24) pages.

Things start with a bang, as Leeja Clane, daughter of North Am Senator Clane and girlfriend of Manus, is kidnapped by a robot and taken aboard a hidden space ship.  The ship is hidden on the other side and very close to the sun.  And so hidden, it is undiscovered by the police and scientists of North Am of the Earth, of the year 4000 A.D.

Pretty much all hope of locating Leeja and a large number of other kidnapped scientists has expired, until Leeja reaches out to Magnus via telepathy.  Of course, she has never had this power in the earlier Magnus comics, but the writer explains that she has been training in this art recently.  Well, it seems she has learned her lessons well, as she is able to reach Magnus before being cut off by her captor.

Her captor is Dr. Noel, who has been lobbying to destroy all robots on Earth in front of the North Am Governing Council.  But having failed to get the rest of the council to back his plans/demands, he has instigated a plan to kidnap the people and scientists needed to start over on a new planet.  The only thing is that his planned new planet inhabitants did not volunteer, but were conscripted!

Once Leeja has given Magnus a clue to her location, in a space ship where the heat is overbearingly hot.  Magnus quickly determines that the ship must be hidden behind their sun and risks flying there at once.  As his ship burns up around him, Magnus launches himself into space wearing using just a force shield that is quickly failing as well.  But he makes it just in time, but is greatly weakened from the ordeal, as well as, the heat within the villain’s spaceship.

Magnus is captured by the ships’ robots, who are under the beck and call of Dr. Noel.  Magnus points out Noel’s hypocrisy, in using robots, but Dr. Noel says he plans to destroy all of his robots once they reach the new planet, thus justifying their use!

Things start to go wrong with Dr. Noel’s spaceship, due to it’s close orbit to the sun and he attempts to launch his craft into sub space only to have it begin breaking apart.  Magnus jumps in and fires the ship’s repulsors, thus reversing the thrust and saving the ship and Leeja, the captured people and scientists, as well as, Dr. Noel and Magnus, himself.

So the day is saved and Dr. Noel taken into captivity and Leeja and all the scientists returned to North Am.  All this wrapped up in an even 24 pages.  The rest of the comic book is made up by a four (4) page backup written, pencilled and inked by Manning and a couple of one (1) page features.  Mankind’s Progress, Earth’s Energy – The Sun, a letters page and a fan submitted Robot Gallery!

This is a series I only own a couple of comics from.  I never picked it up back in the day, as I was too busy buying Marvel and D C Comics to bother with many Gold Key issues.  But this series has it’s following through the ages and Valiant Comics even brought it back not too many years ago, for another go around.  Manning art was very good and adding a comic or two from this series would add to your collection.

That’s it for this RETRO REVIEW, but please come back next week for a new Fabulous Find.  Be seeing  you …