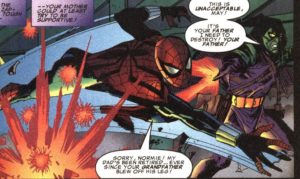 Welcome back to Strange Times & Places, where this week we’re reading a one-off, single issue story that spawned over two hundred issues worth of fan favorite comics – What If? #105, the first appearance of the Spectacular Spider-Girl!

Like most, if not all, issues of What If?, it’s a For Want of a Nail story. In this case, it posits what would have happened if the daughter of Peter “Spider-Man” Parker and Mary Jane Watson-Parker had been born alive in Sensational Spider-Man #11 and grown to be a teenager.

May “Mayday” Parker is having an awesome life: she’s the star of her high school basketball program, she’s an academic whiz, she’s popular with both the sporty in-crowd and the science-y geek crowd, and she has two loving parents. Everything’s going great until one seemingly normal evening where she leaps a solid 20 feet through the air at a basketball game and then is attacked by the Green Goblin while out with friends. This is how she learns of her father’s time as Spider-Man and their family’s feud with the Osborns, leaving her to decide what to do with her newfound power and responsibility.

Come back next week for the next installment of Scripting Errors!