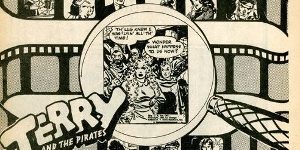 Hey gang, time for a new Fabulous Find, this week, and I’ve brought to light five (5) tabloid newspapers which presented comic strip reprints.  The newspapers are entitled; “Chapters”, subtitled; “showcasing the finest in continuity comic strips”.  And yes the quotation marks are actually included in the title of the newspaper!

Issue number 0ne (1) is dated June 1980 and the newspaper was published monthly for six months.  Yep, I’ve got the first five issues, but I am missing the final issue, number six (6), which was cover dated November 1980.

Here is the cover to the first issue: 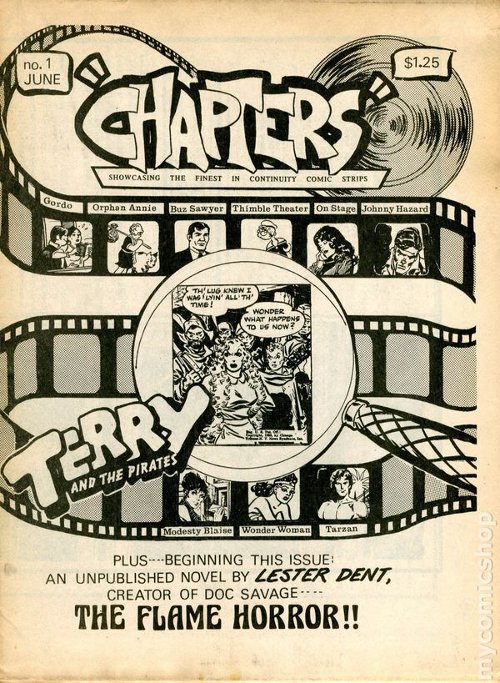 It has twenty-four (24) pages and is published by Devil’s Trident Publications.  The publisher was Leo Giroux Jr. and it was edited by Richard Howell and Carol Kalish.

On Stage by Leonard Starr

Terry & the Pirates by Milton Caniff

and Johnny Hazard by Frank Robbins

I have never been a huge comic strip reader or collector, but these newspapers were a nice way to read long lost comic strips in one location!

Each cover highlighted one of the strips.  The first, as you can see from above features Caniff’s Terry & the Pirates, the second issue highlighted Starr’s On Stage, the third issue cover featured Hamlin’s Alley Oop, the fourth issue highlighted Gray’s Little Orphan Annie and the fifth issue featured O’Donnell’s Modesty Blaise.

I suspect the reason I bought these newspapers were for the Modesty Blaise reprints, but I can not be sure thirty-seven (37) years later.  But I know I was big into reading the Modesty Blaise novels that O’Donnell also wrote, so I think that was what drew me to these.

Sorry, I don’t own the sixth issue, so I can’t give you a low down on that one.  If I ever find one, maybe I’ll do an update somewhere in the future.

Anyway, hope you found this Fabulous Find interesting and please come back next week for a new RETRO REVIEW. Be seeing  you …