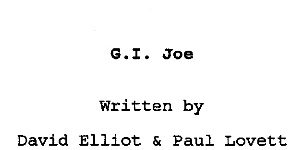 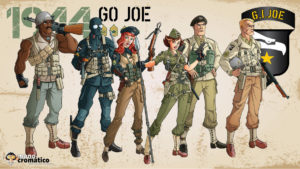 Welcome back to Scripting Errors, where we look at movies that might have been! Today, we’re reading a September 2005 draft of the film that would eventually become G.I. Joe: The Rise of Cobra. We’ll see that even though the final film got a mixed reception, it could have been a bit worse.

Since I couldn’t find any concept art for this one, we’re illustrated with some cool (linked and attributed) fan art.

David Elliot & Paul Lovett, a team whose only other major credit is the Detroit-set crime thriller Four Brothers. Though their work wasn’t the final script, it formed the bones of it and they were still credited on the flick…and sued Paramount when they weren’t hired for the sequel.

When a mission to capture scientists working for shady arms dealer Destro goes sideways, the elite American Special Forces squad nicknamed “G.I. Joe” find themselves put on the bench. They don’t stay there for long, however, as Destro sets his sights on recruiting of their own who was injured in the mission for his super soldier program. The Joes will have to go off the reservation if they want to rescue their brother-in-arms and put an end to Destro’s evil plans – when all else fails, they don’t.

Ultimately, this flick would have been even further from classic comics and cartoon than the movie we got. It over-relied on humor (Scarlett’s frustration with Snake-Eyes’ vow of silence – which he took before they began dating – is a running gag throughout) and reduced Cobra Commander to a simple lackey who had more in common with Venomous Maximus than anyone else.