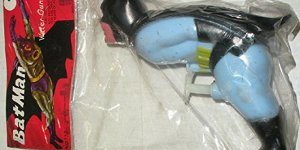 Nineteen-sixty-six (1966), was the year of the Batman.  First up was the television show that took the country by storm.  Not just kids, but whole families, sat around their tv screens and rooted for the dynamic duo, Batman and Robin, to escape from a fiendish trap and defeat that week’s villain.  And because of this, there soon were tons, and I really do mean tons, of Batman merchandise available to purchase.  And one of these items was the 1966 Batman water gun (or squirt gun as we now call them).

Take a look at one still in the package: 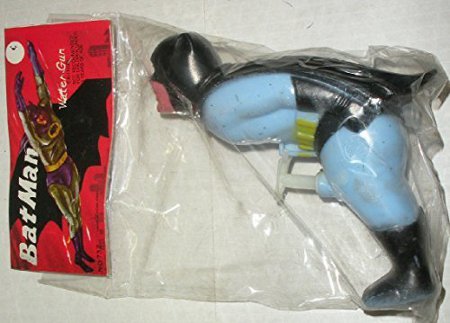 1966 Batman water gun in the package

This one was made in Hong Kong and could be had for less than a dollar at most five and dime stores that year.

Of course this was all made possible by the owners of the Batman copyright, DC Comics, as they are now know.  DC published a monthly Batman comic book, as well as, Detective Comics, a monthly comic which also featured Batman. Plus, Batman also appeared in Worlds Finest with Superman and even Brave and the Bold.  And lets not forget his sorta regular appearance in the Justice League of America comic too!

I tell you, you couldn’t get away from Batman in 1966 and 1967.  It was a freaking phenomenon!  Kids wanted anything and everything that featured Batman, it really didn’t matter what it was either.  Put Batman on it and it sold.  I really could spend years bringing you examples of the myriad of Batman related items from the sixties.

But I’m here today to talk about this squirt gun.  So let’s get a closer look at the toy: 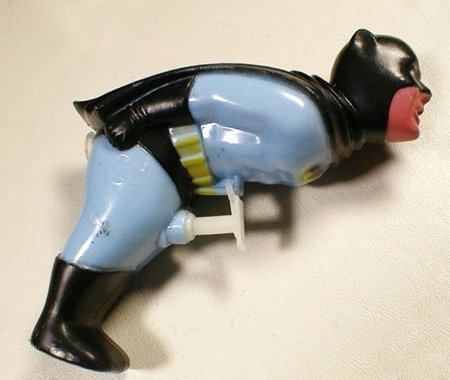 As you can clearly see from the above pics, the trigger is in a rather inappropriate place, and where you filled up the toy, is as well.  If you look closely at the pic above you can just about see the plastic plug coming from Batman’s butt. Yep, his butt!

Can you image anyone today putting out a toy that looked like this?  I’m sure parents across the world would be screaming and boycotting the toy.  And the internet would have exploded!  But hey, things were more laid back in sixties.

I would love to have one in my collection today, but alas, I do not.  So like you, all I’ve got is the internet and research books to behold such a wonderful toy, even though it brings tears of laughter today, I’m sure my ten year old self would have gladly run around the neighborhood shooting my friends with this Batman water gun and never thought twice about it’s appearance!

Any of my readers own one in their collection today, or had one back in the day?  If so, please leave me a comment and let me know if you’ve still got it or if it was lost to the sands of time.  I know most of the squirt guns I owned as a kid ended up broken or at least leaking the water from various cracks.

Thanks, as always, for stopping by and taking the time to read my columns.  I’ll be back next week with a new RETRO REVIEW and I’ll have another Fabulous Find in two weeks.

Hope your Thanksgiving was awesome and that you were able to spend it with family and/or friends.  Heck, maybe both!  take care folks …