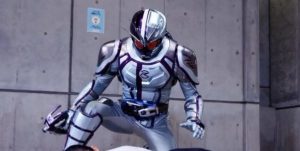 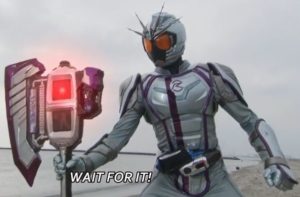 Kamen Rider Chaser! His axe is a stoplight!

Welcome to Tokusatsu Gesundheit, where we rely on nerds more obsessive than ourselves to get our hands on stuff not available outside of Japan. That’s rarely truer than today, when we’re watching a direct to video spin-off to a Kamen Rider series – Kamen Rider Drive Saga: Kamen Rider Chaser.

We open with a recap of Kamen Rider Chaser’s history: He was born as Proto-Zero, the prototype for an advanced series of androids called “Roidmudes”.  He was given the powers of Kamen Rider Proto-Drive, protector of humanity, when his fellow androids rose up against mankind. After falling in battle, he was reprogrammed as Mashin Chaser, grim enforcer of the rebellion’s will, before finding his way back to the side of JUSTICE as Kamen Rider Chaser. Now, he’ll be drawn into a conflict between competing factions of Roidmudes that will force him to choose between defending humanity…and finding his own. 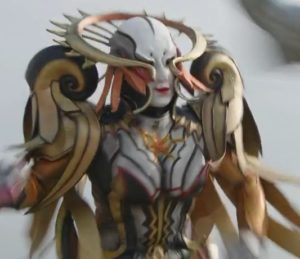 This film is a V-Cinema, which is to say a direct to video film. While those are far from unheard of here in the states, the way Toei uses them with their live action shows is. It has become increasingly common to see spin-offs for popular characters (like Kamen Rider Chaser), epilogues or “final adventures” (the last four Super Sentai series have had them), reunions for older shows (such ten year anniversaries for notably popular Sentai), and continuations for film franchises of middling success (Space Sherriffs not named Gavan) as V-Cinemas in recent years. It’s impossible to imagine Disney producing multiple films – three theatrical, two direct to video – in a year for, say, Lab Rats…but that’s exactly what Toei does for their more special effects heavy kids’ shows.

This movie…wasn’t very good. Kamen Rider Chaser is my favorite Rider from one of my favorite Rider shows, and it pains me that this movie just doesn’t work. It has maybe a tight hour of plot that is stretched to ninety minutes with overly long gags, gratuitous flashbacks, and go-nowhere subplots (including Accel’s cameo). Most frustratingly, it takes place before Kamen Rider Drive’s final arc (which Chaser dies in) and therefore it can’t do anything too interesting with the characters. The film is stuck portraying characters without the interesting developments they’d get as the series reached its climax and is unable to move them forward because they can’t contradict the show. It’s a boring bummer all around. 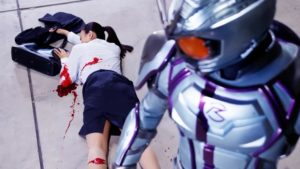 Violence is a big more gory than in the show, though still weirdly kid friendly.

NEXT WEEK: We see what happens when you combine the highs of mid-90s X-Men and the lows of mid-90s Justice League with the Amalgam comics one shots JLX #1 and JLX Unleashed #1!