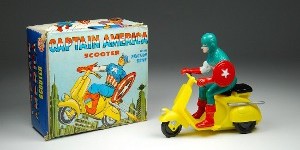 Friday has arrived in all it’s glory and once again my mind turns to comic book related collectibles.  For this week’s Fabulous Find, I’ve brought to light, for your edification and delight, the 1967 Marx Marvel Scooters.  Right up front let me state that I do not, I repeat, I do not, actually own one of these wonderful toys.  I recently found one on eBay but the asking price was for $4,799.00!  Just a little too rich for my wallet, but the seller would consider a best offer!  I wonder if he’d take $200.00?  Somehow, I doubt it.

So what is this collectible toy?  Well, that’s what I’m hear to tell you.  In 1967, the Marx Toy Company teamed up with Marvel Comics and produced three different plastic scooter toys featuring Marvel Super-Heroes.  As you might guess Spider-Man was one of the featured heroes. Unfortunately, I don’t have a photo of this one!

The toy itself was made of plastic and came with a “friction drive”.  In other words, you could pull back on the toy and let it go and it would go forward under it’s own power.

The next figure in the lineup was Captain America.  Here is a picture of that toy and also the box he came in (thanks to Stefan Bilo and his excellent website www.toys-art.com): 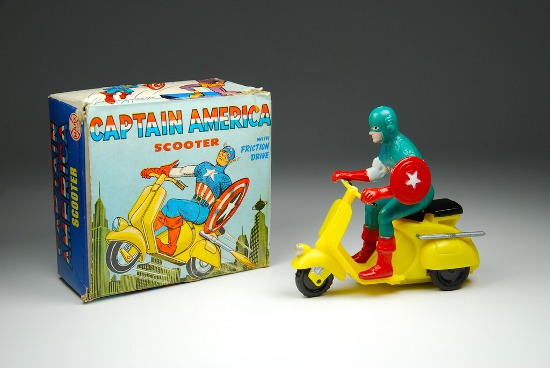 Captain America has the white star on his chest, but is missing the red and white circle stripes on his shield.  No this was not a toy variant, but simply a failure of Marx to spend the time and money to paint the stripes on the shield.  As you can see Cap got a yellow scooter.  It also shows off his figure quite well.

The third toy scooter featured, Thor, God of Thunder.  He too, as you’ll see from the picture below is on a pink scooter.  Somehow, it is harder for me to believe that Thor would ride around on a scooter painted pink!  Spider-Man?  Maybe.  But not Thor.  Though with his flowing golden locks maybe!  Anyway, here’s the picture of that toy and you’ll notice that they didn’t add the black striping to Thor’s boots either: 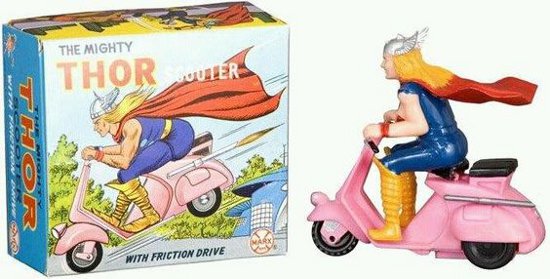 You might not have noticed, but the graphics on the box are all slightly different.  Spider-Man is clearly motoring along a nice level roadway.  Captain America is soaring upwards, like he has just crested a hill and Thor is clearly traveling downhill at a torrid pace.  Well done Marx and Marvel.  You might also check out the cities behind the characters.  Spider-Man is clearly in New York.  Captain America just might be crossing over or leaving Metropolis, notice the Daily Planet building on the far left.  Well it could be!  And Thor seems to be riding in a futuristic city of some sort.  Asgard, Maybe?

My research says these toys cost only 79 cents back in 1967 and most likely would have been sold in Kresge or Woolworth or other Five & Dime type stores.  I honestly can say I never saw them in a store, or I’m sure I would have picked at least one of them up.

I suspect these toys are extremely hard to find in working order almost fifty years later, as is reflected by the pricing of the eBay auction currently running.  There are some other cool Marx Marvel toys, that I also don’t own, but will bring to light in future Fabulous Finds.

One final thing.  I ran across one other picture of the toys, where it was being sold on a blister card, rather than in a box.  I suspect these might have been remainders, but I’ll let you be the judge.  Take a look: 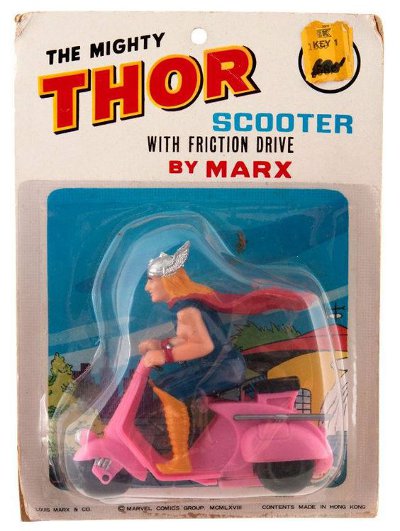 If you look closely you might be able to discern a Kresge price sticker on the top right of the package.  I doubt that it is a K-Mart sticker, otherwise these toys would have been around a lot longer that suspected.  Looking through the blackened out price, it appears that it was being sold for 58 cents, or about 35% off the original price.

I found all of the pictures on the internet and these were the best I could find, to show off these cool Marx Marvel toys.  Hopefully they do the toys justice.  Does any of my readers own one?  Ever even seen one?

So that’s a wrap on this week’s column.  Please come back next week for a new RETRO REVIEW and I’ll be back in two weeks with another Fabulous Find.   It looks like Spring is right around the corner, so enjoy the weather and see you soon.