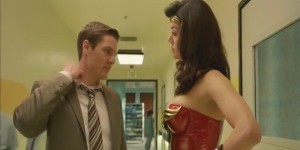 Welcome back to 1 out of 5 – Would Recommend, where we’re super excited that Batman V. Superman: Dawn of Justice will bring some DC heroes to the silver screen for the first time. We’re celebrating that by examining the most recent attempt to bring one of those debuting heroes, Wonder Woman, to the small screen – 2011’s Wonder Woman TV pilot! 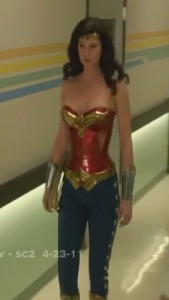 That costume looks like something out of The Tick. Maybe with a more iconic design…

Who Made This Garbage?

TV producer extraordinaire David E. Kelly! The man’s resume is impressive – L.A. Law, Doogie Howser, M.D., Chicago Hope, Ally McBeal, Boston Legal – but he’s had a spot of bother getting anything off the ground in the 2010’s. NBC ordered this pilot buoyed by early ratings on Kelley’s then-newest show Harry’s Law and, naturally, by the surging popularity of super heroes. The results were…not great.

To put it nicely: David E. Kelley doesn’t “get” Wonder Woman, and it’s good this show did not get picked up.

Less nicely: David E. Kelley’s familiarity with Wonder Woman seems to begin and end at reading the first paragraph of her Wikipedia page. Diana’s compassion and role as an ambassador of peace have been important to her characterization for decades and Kelly misses them completely, turning her into an unlikeable fascist who happily uses sadistic brutality to achieve her goals. He should never be allowed near a comic book character ever again, not even the costumed panhandlers on Sunset Boulevard. If you watch this before going to see Batman V. Superman next week, you can rest easy knowing that Zack Snyder would have to work overtime to get Wonder Woman wronger than this. 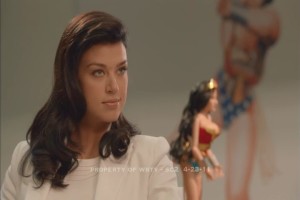 Though to be fair, she’s right about that action figure being ridiculous.

NEXT WEEK: We look in on the last attempt to “Unite the Seven” in live action, the 1997 Justice League of America pilot movie.