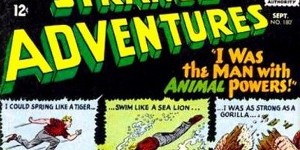 Hey, hey, hey, it’s time for a DC Comics‘ RETRO REVIEW.  Therefore, I have pulled out my copy of Strange Adventures # 180 from the DC comic book section of the vault.  This comic book is cover dated September 1965.  It features a cover drawn by Carmine Infantino and inked by Murphy Anderson.  Two gentlemen who really knew how to put a cover together, though this one might not be their best, but it does get the idea of this new character, and what he can do, across quickly.  Take a look: 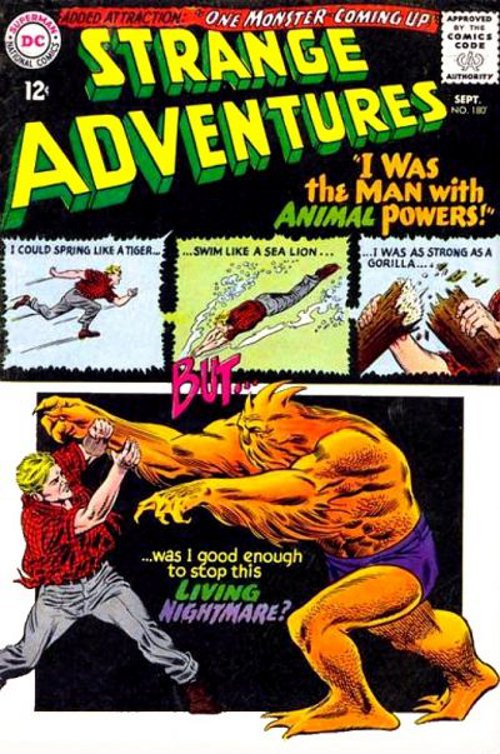 The featured story of this comic book was “I Was The Man With Animal Powers” and it was written by Dave Wood.  Infantino supplied the pencil artwork and George Roussos supplied the inks.  The story ran sixteen (16) pages and introduced the character, Buddy Baker, later to be known as; Animal Man.

The story begins with Buddy chickening out when it came time to ask his girlfriend, Ellen, to marry him.  The next day, he and his friend, Roger, go hunting.  They split up go in two different directions and Buddy climbs a ridge and is exposed to a vibrant blinding light.  When he regains his sight and senses, there is a tiger leaping toward him.  He quickly leaps away, avoiding the charging tiger.  Then quickly a gorilla also begins an attack.  Buddy grabs hold of the tiger and whips him into the gorilla, stunning them both.

Roger leads a group of men tracking the animals, which came from a circus train, which derailed.  After Buddy has put the temporarily out of commission, the men quickly capture the two animals.  Buddy and Roger discuss Buddy’s new found “animal powers” and then they hear of a rampaging elephant nearby.  Buddy quickly races to the new location and meets the elephant’s charge head on and halts him!  Next up, Buddy is swimming out into a lake, to rescue two kids, who’s raft has been overturned by a playful escaped sea lion.  It seems as Buddy gets close to an animal he acquires it’s “powers”.

Chapter two begins when Buddy and Roger hear about a creature approaching a logging camp.  Buddy again races to confront the creature and manages to put two and two together and realizes that the creature has come from outer space and that’s it’s crash landing nearby is what has given Buddy his power to absorb animal abilities when he is exposed to them.  Using the animal powers that he has acquired so far, Buddy battles the space creature and eventually defeats it.

Using his new found courage, Buddy manages to ask Ellen to marry him in the last two panels of the story, but then faints dead away to end the first appearance and origin of the hero that will soon become, Animal Man. 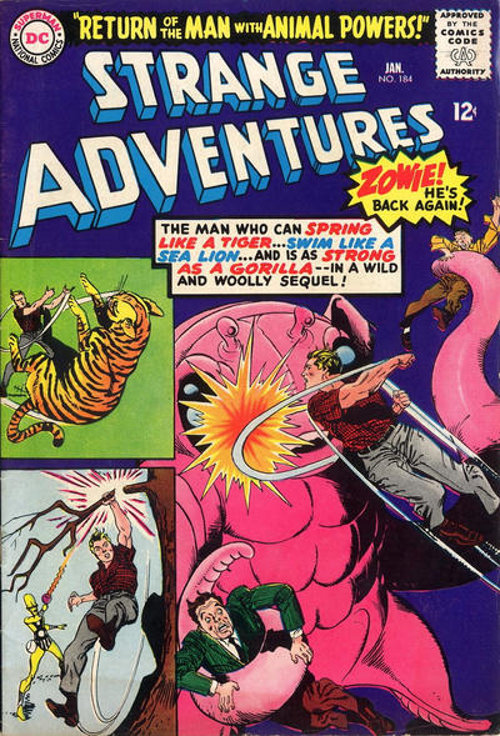 Gil Kane provided the pencils and inks for the cover, as well as, the interior story in this issue.  And then again in Strange Adventures # 190, cover dated July 1966, Animal Man returns.  It was in this, his third appearance that Buddy Baker dons his costume for the first time.  Here’s that cover, as well: 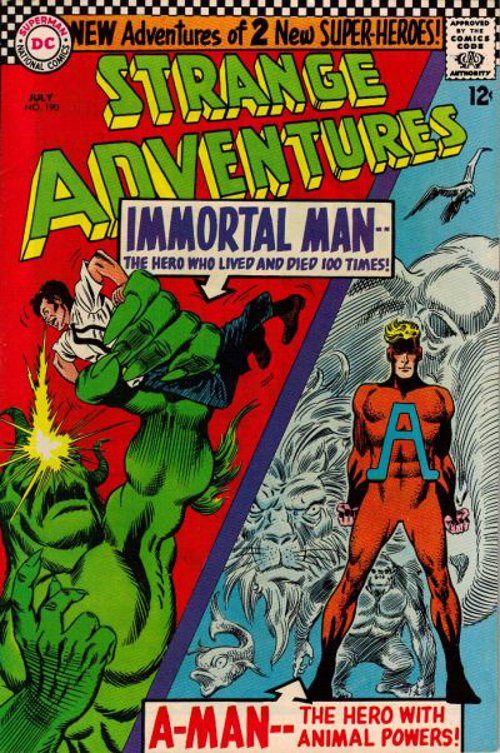 All three stories were written by Dave Wood and in this third appearance the artwork was done once again by Carmine Infantino and George Roussos.  I can’t say that it’s the world’s best designed costume, but his A is certainly bigger that Captain America’s A over at Marvel Comics.

That’s it for this week’s RETRO REVIEW, but please return next week for a new Fabulous Find.  Be seeing you …