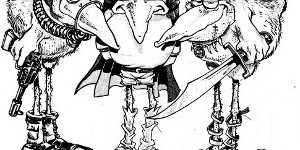 While searching for something else to feature in this Fabulous Find column, I came across a forgotten program from a local Detroit convention I attended back in 1972.  It was called the Detroit Tri Con 1972 and it was a spin off from the Detroit Triple FanFare conventions held during the same period.  It was held at a smaller hotel in downtown Detroit, called the Pick-Fort Shelby Hotel.  It was held over the weekend of August 3rd through the 6th, from Thursday through Sunday.  Here is an ad for the show from The Buyers Guide For Comic Fandom # 14: 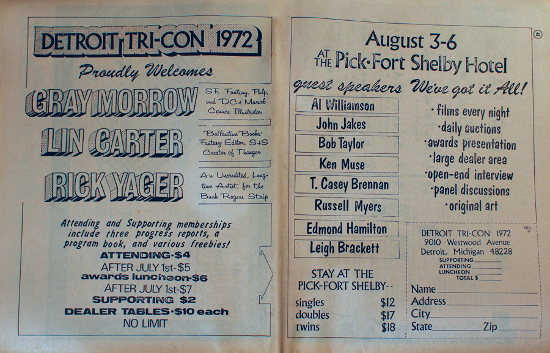 As you can see from the ad, the guests for the show were a nice mix between comic book and comic strip artists and science fiction authors. Representing the artists, were Guest of Honor, Gray Morrow, as well as, Rick Yager, Al Williamson and Russell Myers.  And representing the writers; were Guest of Honor, Lin Carter, as well as, John Jakes, Edmond Hamilton and Leigh Brackett.

I hope no one is offended by the Gray Morrow artwork that I will use to accompany this column, as he tended to draw his women characters in a state of undress, shall we say.  Included in this is the actual cover for the program: 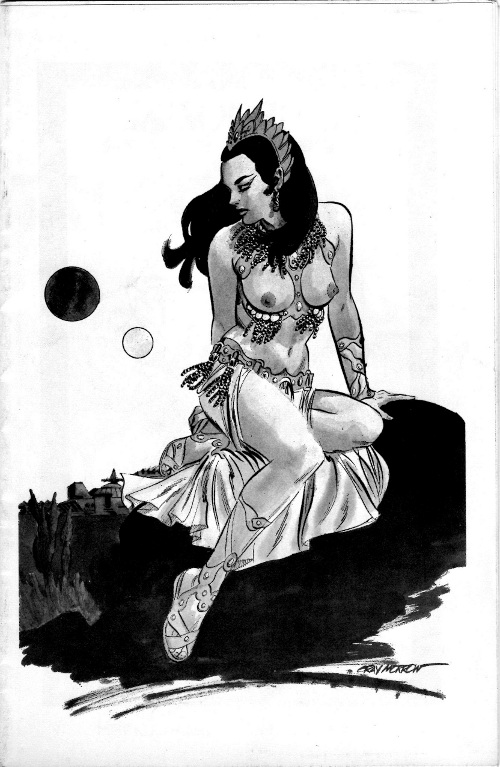 A pretty nice drawing of Dejah Thoris from the Edgar Rice Burroughs’ John Carter of Mars series.  As you can see from the cover, the convention committee chose not to add anything to Morrow’s artwork on the cover, including the convention name, etc.  They just chose to highlight the art!

The inside cover was a memorial to a recently departed, Edwin Aprill, Jr, who had passed away earlier in the year due to a car accident.  Aprill was considered one of fandom’s founders, as he published a series of newspaper strips reprints in 1965, like; Buck Rogers in the 25th Century, as well as, starting the comic fanzine, Cartoonist Showcase in 1967.

Finally on the third page we see the name of the convention, with artwork by Bob Taylor: 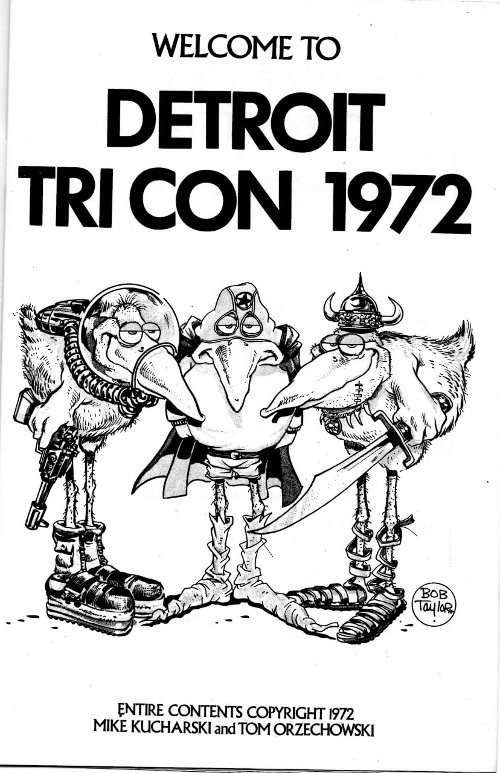 This was followed by a page listing the convention committee, as well as, advisors and staff.  Also listed were a list of people the committee wanted to thank for the various ways they helped this convention.  Names of note that appear are; Tom Orzechowski, who became a professional letterer in the comic field, Terry Austin, who became a well known inker in comics.  They both were committee and staff members.  Other fans who became professionals included; Tony Isabella, Arvell Jones, Marty Pasko.  And finally also thanks were Detroit superfan Dr. Jerry Bails.

Here is a look at the programed events over the four days, from page five of the program: 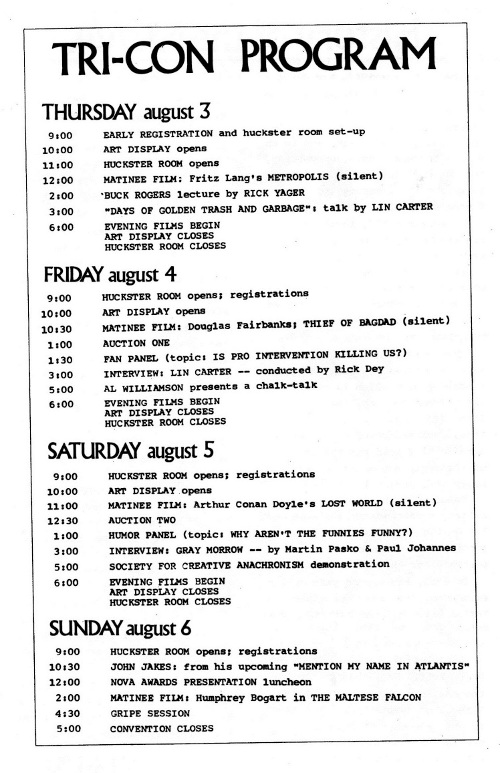 I love that the dealers room was actually called the Huckster Room!

Next up was Alexis Penn writing on the history of the Nova Award that was given out at these Detroit conventions.  Following this was a eight page portfolio provided by Guest of Honor, Gray Morrow.  Here’s a couple more pics from the program: 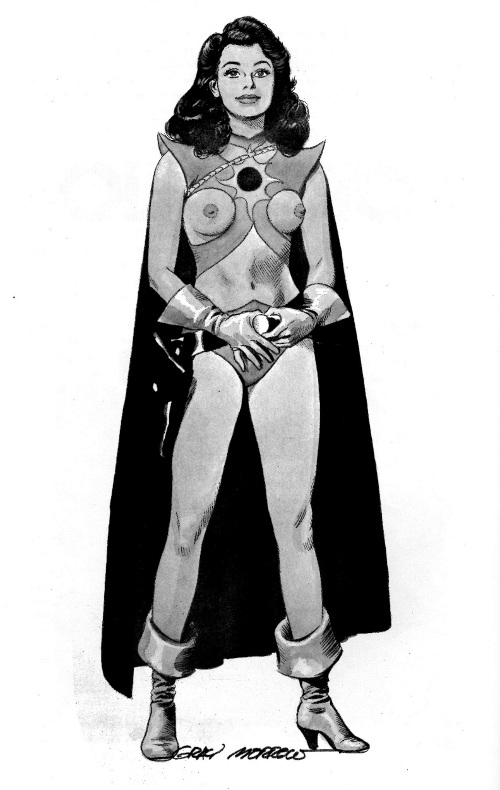 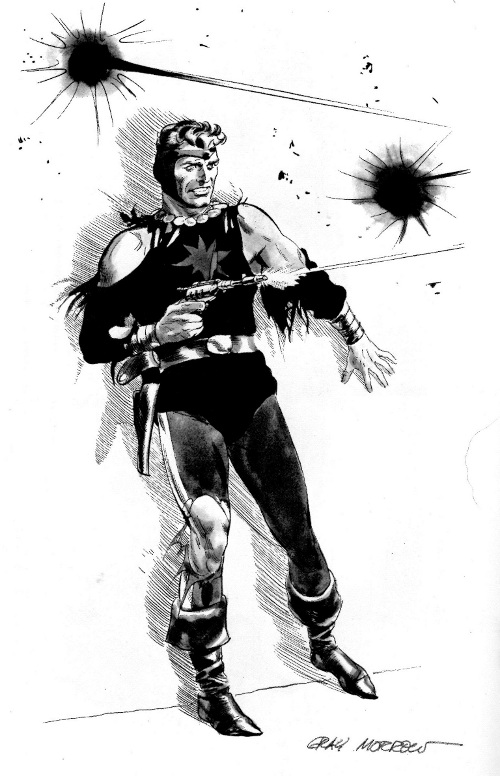 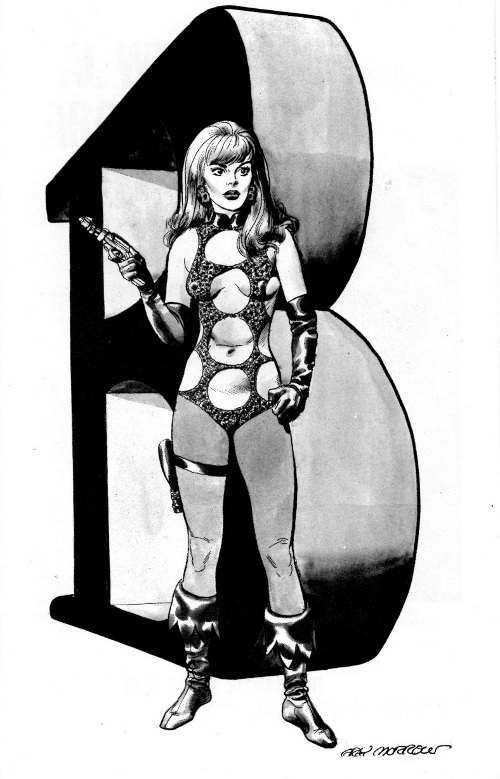 Following the portfolio, there were two page write ups on each of the Guest of Honors; Gray Morrow and Lin Carter. This was followed by ads for the Able-Man Book Shop in Hamtramck, Mi, a fanzine ad from Joan Aprill, I assume this was the widow of Edwin Aprill, Jr. and an ad from the Curious Book Shop in East Lansing, Mi.

And finally a congratulations from Stan Lee and Marvel Comics, take a look: 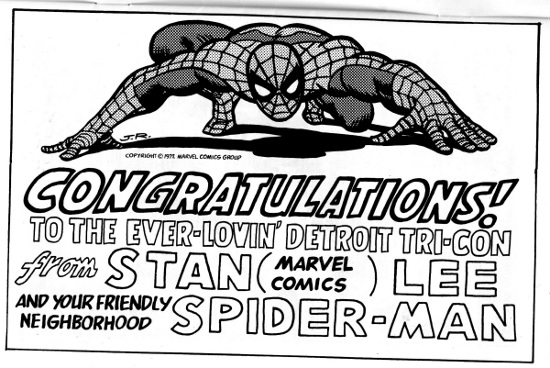 Sorry, when I scanned it, it turned out a little crooked and I just didn’t think it was off enough to do it over again!

There waa a small space reserved for autographs on page 23, and the back cover was left blank.  Though I have absolutely no memory of this, I must have approached artist Russell Myers and asked for a sketch, or he volunteered to do one for me, as on the back of my program is this sketch of Broom Hilda: 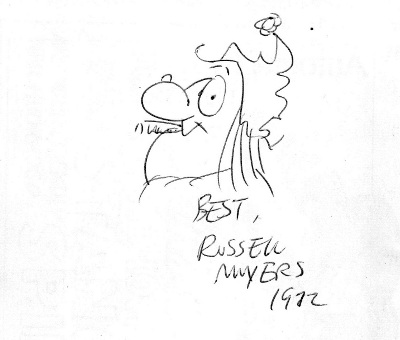 I still can’t believe I have no recollection of meeting Mr. Myers or of him sketching his character, Broom Hilda, on my program.  I really must be getting old!  But no comments from the peanut gallery, eh.

So that’s it for this  week’s Fabulous Find.  I hope you enjoyed it and please come back next week for a new RETRO REVIEW, and of course, in two weeks, for another Fabulous Find.  Til then …. be seeing you …