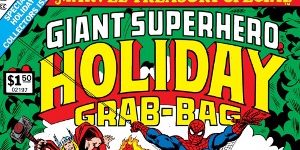 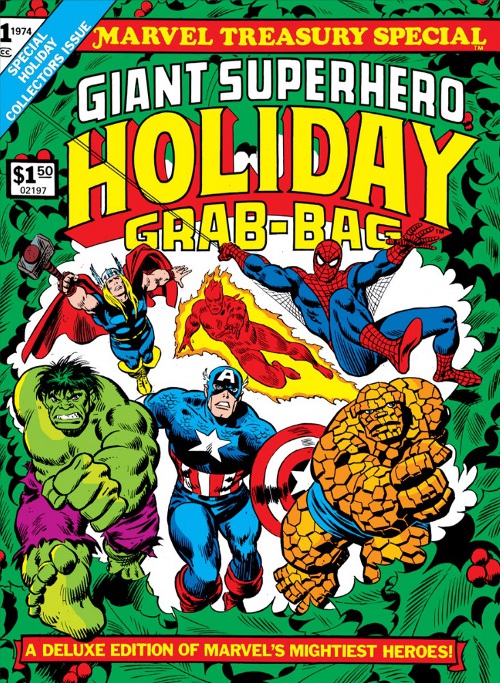 It is not obviously clear who did the cover, but if you look closely, you can tell the pencils and inks were both done by “Big” John Buscema, but then “Jazzy” John Romita Sr. did alterations to the faces of a couple of the heroes.  John did both the pencils and inks on these changes.  But never the less, it’s a spiffy cover!

The book itself includes five (5) reprinted stories, with actually only two (2) of them really having to do with Christmas and the Holidays.  The first story, that does take place at Christmas time, reprinted is; “Have Yourself A Sandman Little Christmas”.  It was written by “Rascally” Roy Thomas and the story was pencilled by Ross Andru, with inks by Mike Esposito.  This story was reprinted from Marvel Team-Up # 1, originally dated 1972.  So just a short two years prior to this special Holiday edition.

Next up is; “In Mortal Combat With …Sub-Mariner”, written by Stan “The Man” Lee with both pencils and inks by the great Wally Wood!  This story is reprinted from Daredevil # 7, originally published in 1965.  It doesn’t really have anything to do with Christmas or the Holidays.

Following that great tale is; “And To All A Good Night”, featuring The Black Widow, reprinted from Amazing Adventures # 5, originally appearing in 1971.  This is the second and final story in this Treasury sized book that takes place around Christmas time.  The story is written by Roy Thomas and the art is provided by Gene Colan (pencils) and Bill Everett (inks).

The final two (2) stories are reprinted from The Fantastic Four #s 25 & 26 from 1964.  The first story is entitled; “The Hulk VS. The Thing” and it is written by Stan Lee, pencilled by Jack “King” Kirby, with the inking done by George Roussos.  And the second story is entitled; “The Avengers Take Over” which is by the exact same creative team as issue # 25.

All the reprinted stories are worthwhile and the whole package, with the over-size art really, really nice!  Though it sold for $1.50 back in 1974, so it wasn’t cheap to young comic book buyers.

What I find rather strange is that three (3) of the five (5) stories were also included in the 1978 Fireside book; Marvel’s Greatest Superhero Battles, just four years later.  In fact they, In Mortal Combat, Hulk VS Thing and The Avengers Take Over are the first stories reprinted in that volume.  Now that book does reprint nine (9) additional stories, but it seems odd that these three stories appeared in both places within such a short time.  Did some one get lazy, I wonder?

Oh, and before I go, here is the back cover to the 1974 Marvel Treasury Special, Giant Holiday Grab-Bag: 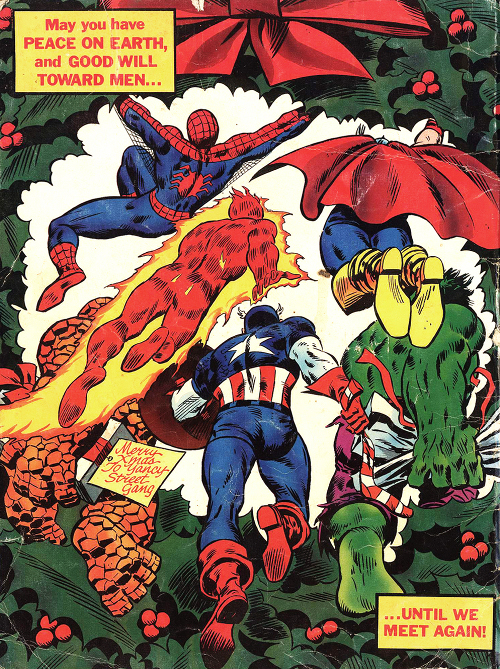 I’m pretty sure that the back cover is all John Buscema!  But please correct me if I’m wrong.

And that’s a wrap for this week’s Fabulous Find.  Please come back next week for the final 2016 RETRO REVIEW.  And I hope all my family, friends and followers have a wonderful Christmas time or what ever other Holiday you celebrate.  Lift a drink of your choice and I wish you all the best … be seeing you!