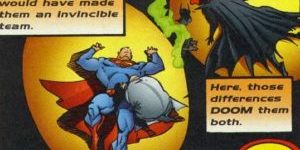 Welcome back to Strange Times & Places, where we’re celebrating the end of the year by reading the Elseworlds 80 Page Giant! Though it was eventually published – with an extra story added – in 2012, the original printing was ordered pulped by Paul Levitz over scene in one of the stories…a story that would go on to be the first from the special to see print AND won two Eisners.

There are nine tales contained in this volume, each presenting a unique one-off tale. Every type of Elseworlds tale is represented, with some executed better than others.

The Reaching Hand, playing up the body horror of stretch powers. 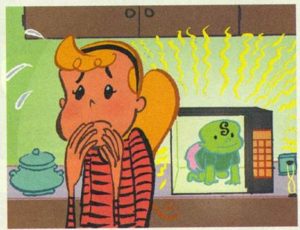 The panel that got this comic yanked.

The Vigilantes in Apartment 3-B – Birds of Prey reimagined as a Soap Opera strip from the newspaper funny pages.

Superman Jr. is No More! – A brand-new Super Sons tale in which Superman, Jr. decides to retire out of redundancy until his father’s apparent tragic death.

Faking your death to teach your son a lesson is a TOTAL Silver Age Superman move.

Silver Age Elseworlds – a series of silly fake “first pages” for Silver Age tales with a modern Elseworlds sensibilities. A one-note joke, but a funny one.

All of these stories do a fine job telling tales in worlds that feels thought out (or as thought out as possible in the space available). They either tale a complete story or feel as though more stories could come from that world and those are the true marks of a good elseworld comic in my book.

The JLA as The Beatles. That’s the joke.

Dark Knight of the Golden Kingdom, Scandalgate, and Rockumentary are all pretty shallow joke stories without much point to them. Still, 6/9 is a darn good ratio of compelling-to-boring stories.

NEXT WEEK: Tokusatsu Gesundheit will talk about a series you can watch right now, Kamen Rider Ex-Aid!