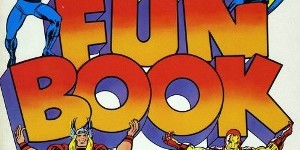 It’s time for a new Fabulous Find.  Woo hoo!  This week I’ve found the 1976 Mighty Marvel Superheroes Fun Book filed away on my book shelves.  It’s a Fireside Book , published by Simon and Schuster.  It is actually written and illustrated by someone named; Owen McCarron.  Though to my eyes, some of the artwork is culled from Marvel Comics and not drawn by Mr. McCarron, at all.  For example of page 41, there is clearly a Jack Kirby drawn Doctor Doom figure straight from Marvel’s Doctor Doom poster.  But I suppose that McCarron could have re-drawn the figure.  I did see examples where he might have re-drawn a face onto a Frank Brunner Dr. Strange figure.  This is on page 47 of the book.

Here is the cover to the paperback book: 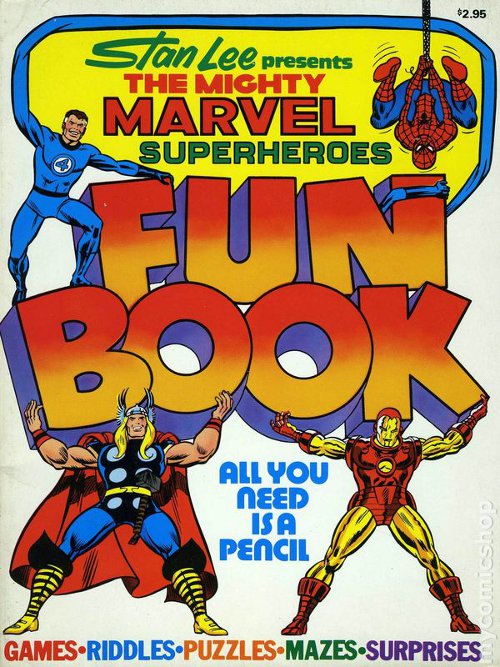 As you can see from the picture above, the book sold for $2.95 when it came out in June of 1976.  looking at the cover, I’d say that John Romita Sr. did the art for the cover of the book.  No where is he credited, but you be the judge.

The Marvel Comics and Fireside Book partnership proved popular and a financial success for both companies.  All in all, Fireside published twenty-four (24) books featuring Marvel heroes between 1974 and 1979.  The very first was Origins of Marvel Comics, which was published in September 1974.  I’ll get around to bringing that to light in a future Fabulous Find.  Keep watching!

The book featured pages upon pages.  Well, not including the covers, the books ran 128 pages of fun games, riddles, puzzles, mazes and surprises, as you can see from the cover copy running across the bottom of the book (see above).  Generally the book was divided up into four (4) sections.  The first section was “Marvel-ous Mazes”, the second section was “Wondrous Word Games”, the third section; “Rollickin’ Riddles & Pandemonious Puzzles”, and the fourth section; “All Kinds of Other Things”!

Here are a couple of the puzzles.  Feel free to print them out and complete them if you’re so inclined.  From page 47, it’s the “Strange Scramble”.  You need to unscramble the the 14 words in the word list  to assist Dr. Strange: 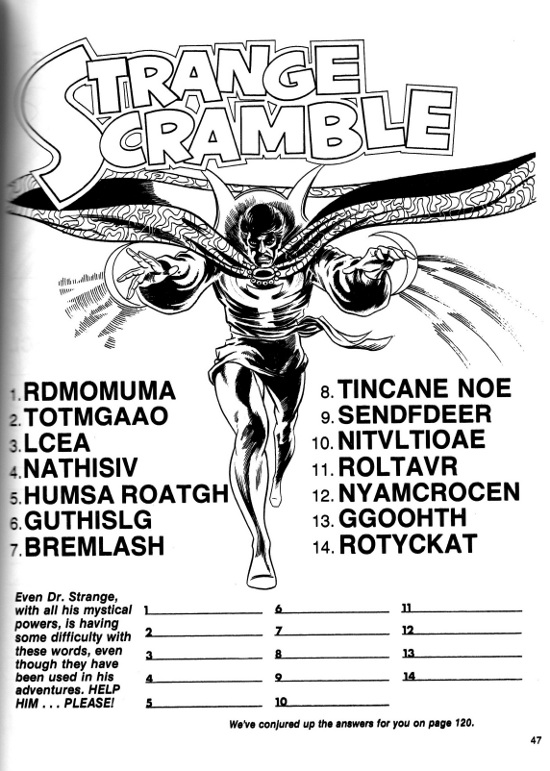 From page 81, here is “Symbols of Excellence”, where you need to identify the symbol displayed on the “Many Men of Marvel”: 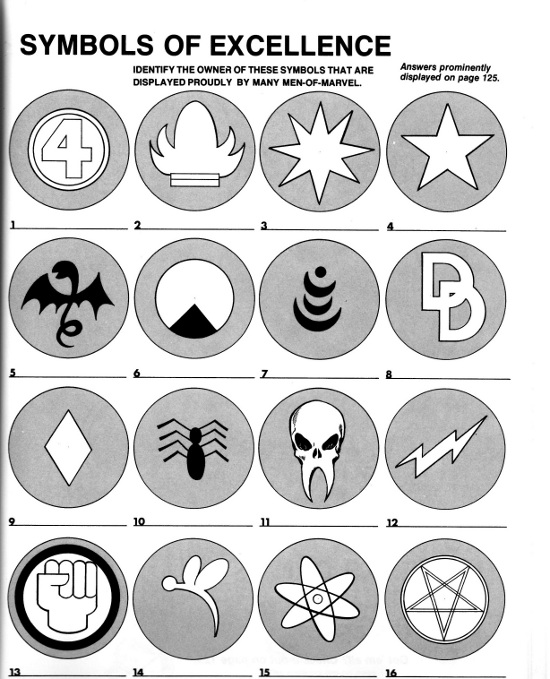 And lastly, from page 88, you are tasked to identify the forty-five (45) mistakes in the drawing.  Can you spot them all?  Give it a try: 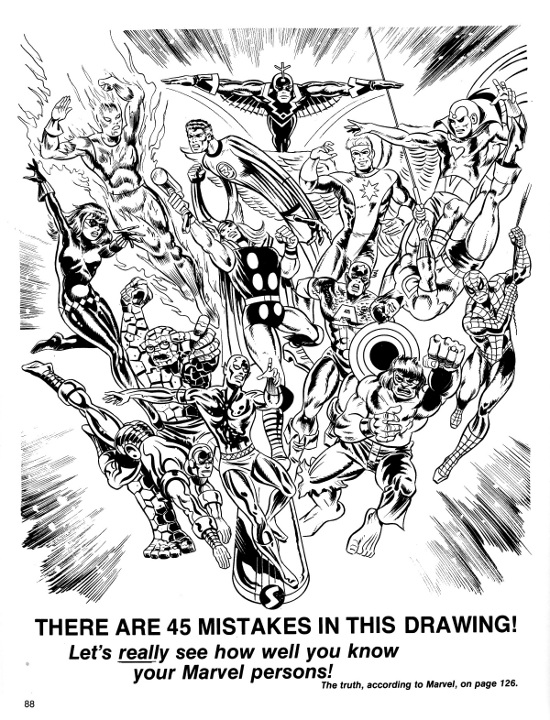 And just because. here’s the back cover to the book, as well. 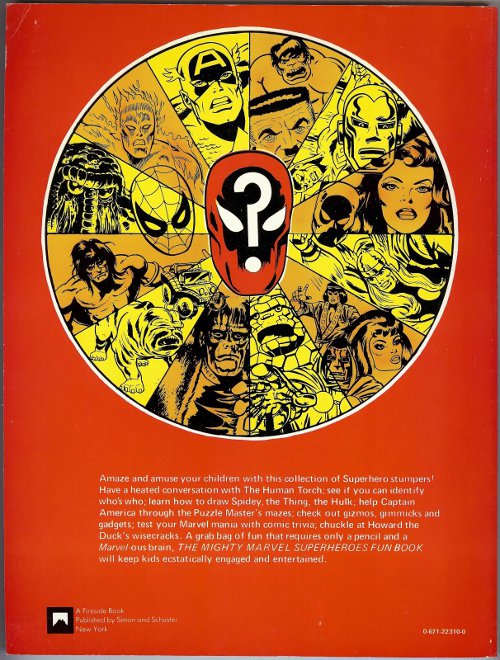 As I said above, the partnership between Marvel and Fireside proved to be worthwhile for both.  In fact, this first book was so successful that four additional Fun Books were published over the next three years.  Take a look: 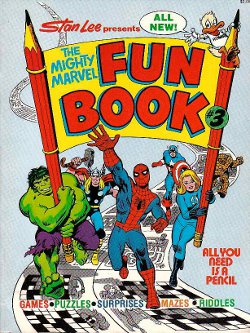 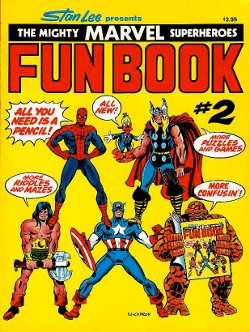 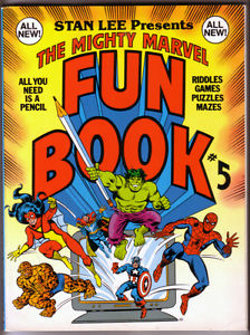 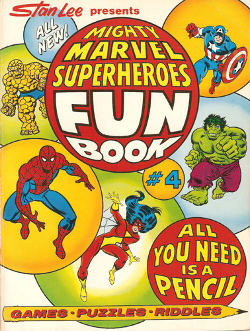 In fact this series proved so popular that there was one additional Fun Book published, also in 1979; the Mighty Marvel Jumbo Fun Book.  I’ve not seen a copy of this last book, but I’m guessing it might be made up of the best of the puzzles from the first five books, but who knows, it might contain all new material.  But somehow I doubt that!  Here’s that cover for you completists out there: 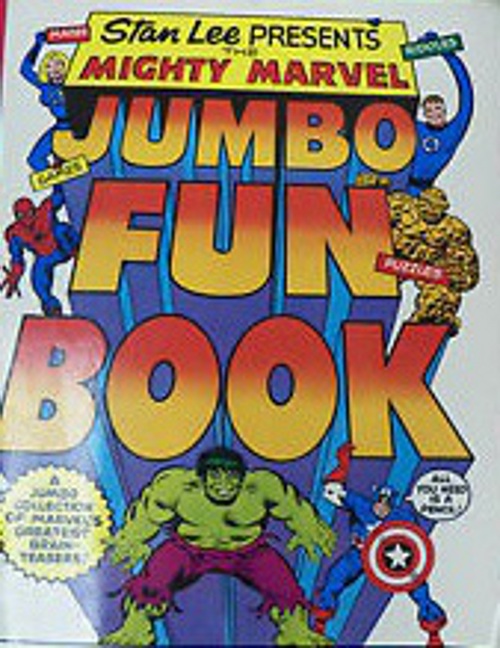 So, does it make you want to go out and track these babies down?  I only own the first one of the books, as I think I stopped buying them as the puzzles, etc. just were two easy and aimed at a younger audience.  Or maybe I never saw the others on the book shelves of my local book store.  I suspect these were not available at comic rack locations, but were found at “real” bookstores.  Heck, I might have even received it as a present.  Frankly, I don’t remember and ultimately it really doesn’t matter.

I hope you enjoyed this week’s Fabulous Find.  Please come back next week for a new RETRO REVIEW.  Til then … be seeing you …