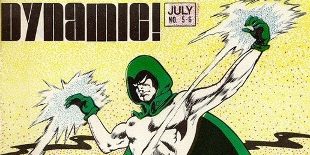 Time for another Fabulous Find!  And this week I’ve gone to the fanzine section of my collection and pulled out All Dynamic # 5/6 from July 1970.  All Dynamic was published by Dynamic Publications.  And Dynamic Publications was Alan Light of The Buyer’s Guide for Comic Fandom, or later, just The Buyers Guide (TBG) fame.  The cover is by Bill Black and features the DC Comics character; Spectre. 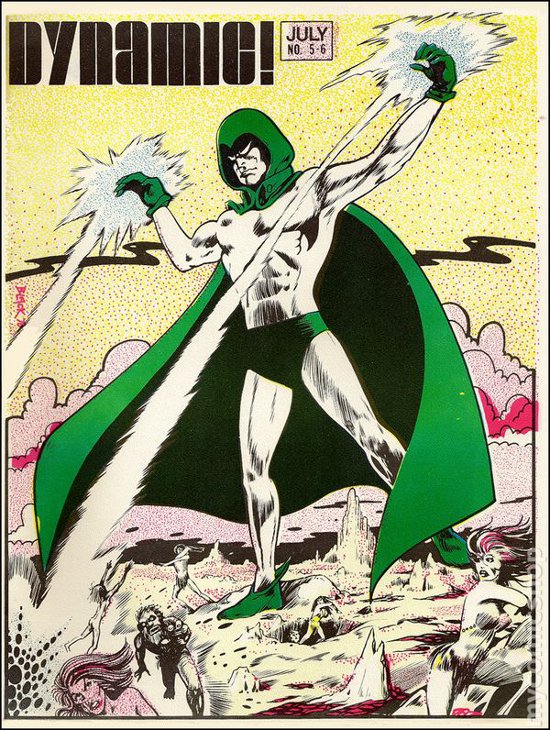 The inside cover features a gunslinger by Dan Adkins, then we get an editorial by editor/publisher, Alan Light.  Having subscribed to the Buyers Guide for Comic Fandom from pretty early in it’s run.  I don’t remember the exact number that my subscription began, but I’m sure it was somewhere in the thirties, I was always curious what Alan Light looked like.  Well, here on page three was a picture of a young Light, take a look: 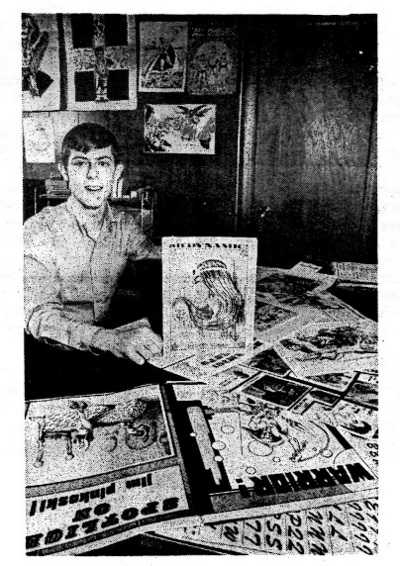 He’s holding up a piece of artwork from John Fantucchio, a prolific fan artist of the late sixties and seventies.  The artwork at the bottom left of the picture, that is actually used in this issue, as is the piece entitled; Warrior seen to the bottom right.

The first article in the fanzine is by Mark Evanier, and he writes about Marvel Comics‘ Captain America.  It is nicely illustrated by a Fantucchio piece of Captain America art.  He writes of the Golden age Cap, then discusses the Ted White book; “The Great Gold Steal“, before moving onto the Cap stories in Tales of Suspense.

Turning the page we are greeted by the Jim Pinkoski drawn Warrior artwork.  This is followed by The Shade, as drawn by cover artist, Black.  I’ve reproduced it below: 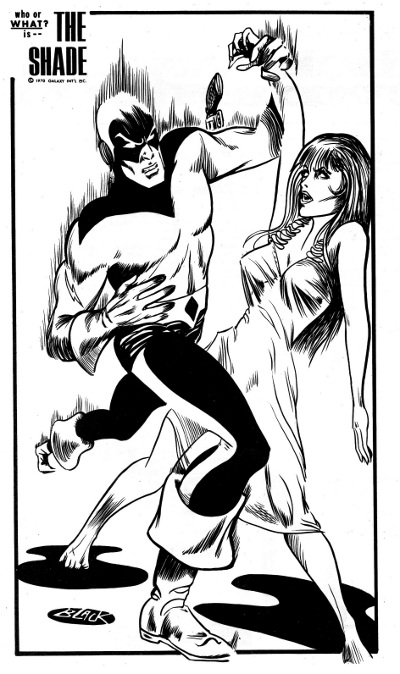 The Shade by Bill Black

Next up is a short one page article by Sgt. Jim Mendelsohn on the Chester Gould Dick Tracy newspaper comic strip.  Following this is a three page letters section entitled; Dynamic Comments.  This issues features letters from Dwight Decker (of The Comics Journal fame in later years), and famous fans like; Alan Haney, John McLaughlin & Bill G. Wilson.  The letters page also features spot illustrations by fan artists; Steve Fabion and others.

Continuing on, we get an opinion article by Mark Rogers entitled; “Handshake In Thought”.  Immediately following this is some early fan art by a couple of Detroit guys, Arvil Jones and Rich Buckler.  Here it is for you to enjoy: 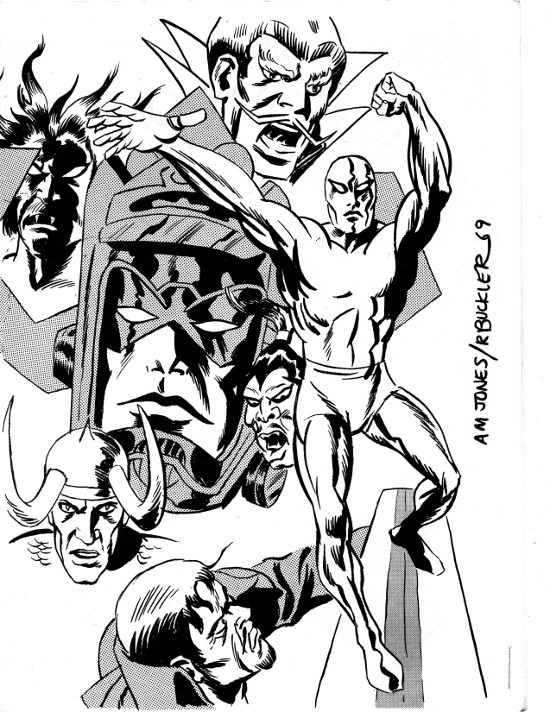 Next up is “Anatomy of a Hero” by Gordon B. Matthews, where he gives a disillusioned look at comic book superheroes.  Then we turn the page to the center spread and find a nice Tarzan illustration by Don Newton.

Following this is the “Spotlight on Jim Pinkoski” article written by Light and features an interview with artist Pinkoski.  The spotlight/interview is nicely illustrated by Pinkoski artwork throughout.

Next we have a nine (9) page Good Guy strip written and drawn by Alan Hanley; entitled “The Alien”.  Good Guy is a recurring character that Hanley wrote and drew which appeared in many different fanzines back in the day.  He also was featured in his own fanzine, entilted: Alan Hanley’s Comic Book.  I own a couple of these, so look for a future Fabulous Find on them.  Good Guy is an homage to    C C Beck’s Captain Marvel.  Hanley’s writing and art are top notch, so don’t fail to pick up his work if you get the opportunity.

Which brings us to the to the inside of the back cover, which is entitled; Miscellenia and features pictures of future professional writer, David Anthony Kraft, Robert Ripley (the creator of “Ripley’s Believe It Or Not”, Walter Lantz (the creator of Woody Woodpecker) and Bill Keane (the creator of “The Family Circus”).  Also there is a self caricature of fan artist Jim Jones.

Which brings us to the back cover, which features the Good Guy family by Alan Hanley.  ANd here’s that back cover: 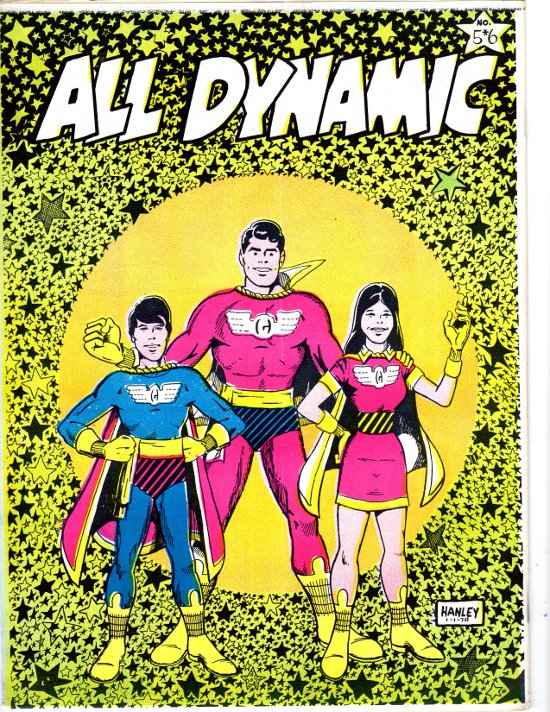 All Dynamic # 5-6 Back Cover by Alan Hanley

A pretty nice fanzine, from Alan Light, all in all.  I own a couple of other All Dynamics, but this is the only one I have with color covers, so I opted to feature this one.  If you’re interested in the others, please leave me a comment, requesting the others, and I’ll be happy to comply.

So please have a great week and be sure to come back next week for a new RETRO REVIEW, featuring a DC comic book and then again in two weeks for a new Fabulous Find.  Be seeing you …