1 out of 5 – Would Recommend: Yor: The Hunter from the Future 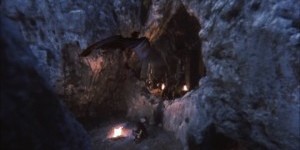 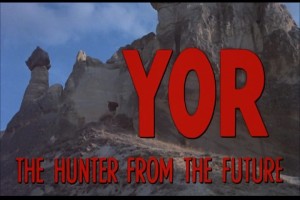 Welcome back to 1 out of 5 – Would Recommend, where B-movie stars are Best Actor in a Leading Role. Today we’re hunting carnivorous triceratops with 1983’s Yor: The Hunter from the Future!

Caveman hunter Yor travels the world to find answers about who he really is and where he comes from. The answers are out there but he’ll have to battle hungry dinosaurs, purple cave rapists, useless love interests, and evil robots to find them!

Who Made This Thing? 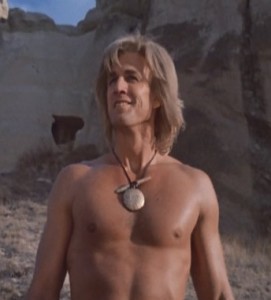 Currently, this man has been in as many Captain America movies as Chris Evans.

Some Italians. Who cares? The draw of this movie is its star, Reb Brown! Fans of Mystery Science Theater 3000 will recognize him as Dave Ryder from the classic episode riffing on Space Mutiny. Comic book fans who were kids in the 1970’s and/or who rented from Hollywood Video in the nineties might recognize him as Captain America from 1979’s Captain America and Captain America II: Death Too Soon. He a certified B-Movie action star, and his movies a hoot.

Yor, like most of Reb Brown’s oeuvre, is patently ridiculous and incredibly fun to watch. The primary love interest is utterly useless, the sidekick is a more effective savior than the hero, and the movie’s big twist is spoiled by the title – these aren’t ancient cave people, they’re future cave people. It’s a b-movie mess from start to finish, so it’s worth your time both solo or with friends. Also worth your time: internet comedian Noah “Spoony” Antwiler’s video review of the movie, which is a riot in and of itself. It’s about 20 minutes and not work safe, but Yor would never have ended up on this column’s radar without it.

Category: TV & MoviesBy Chris WalkerMarch 31, 20151 Comment
Tags: 1 Out of 5 Would RecommendMST3KReb BrownYor: The Hunter from the Future