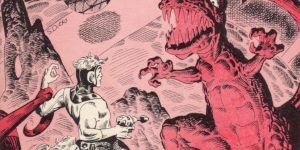 Hey Ho everyone!  I’m back this week with a comic book fanzine that I’ve wanted to own for quite a few years and I finally managed to purchase one on eBay last week and it was delivered this week.  The fanzine in question is all stars # 1.  It was published in the summer of 1965, by Golden Gate Features, Inc., which makes it fifty-four (54) years old!

It may not be one of the earliest fanzines published in our fandom, but it has contributions from quite an auspicious group of fans and professionals, so I have always wanted to add a copy to my collection.  And now I have!

The first thing you will notice is the excellent cover done by Steve Ditko of Spider-Man and Dr. Strange fame, while he was still producing comics at Marvel Comics.  Though the subject matter looks a little more like the work he was producing at Charlton Comics at the time, in my opinion.

Here is that front cover:

Wow, it still provides an impact all these many years later! The reds and pinks really make the black and white figures pop! I love it!

The contributors within, are a who’s who in the small realm of comic book fandom, at the time. There are stories by Ronn Foss, Roger Brand, Biljo White and Mike Vosburg. Plus a picto-editorial written by Marty Arbunich and drawn by Bill DuBay. Take a look at the all stars Table of Contents, if you don’t believe me:

First up is the story “Belle Starr First Woman in Space” which is written and drawn by Foss. It runs twelve (12) pages and is an excellent story with nice aetwork. Next up is a story featuring Biljo White’s fan favorite character, the Fog. The story is not titled, but is the Origin of the Fog, and probably should be entitled that very title. It runs ten (10) pages and is well written and drawn.

Following these two stories is “The Return of the Green Sorceress”, written and drawn by Roger Brand. Brand has the audacity of writing and drawing a sequel to a Blue Bolt professional story written by Joe Simon and drawn by Jack Kirby! It runs just six (6) pages but supplies a real surprise ending.

The last story in this wonderful fanzine is; “Star Masters of Navola 5” written and drawn by Mike Vosburg, a native of Pontiac, Michigan at the time. It also is only six (6) pages and features early work by Vosburg.

Finally, the issue is capped off by a two (2) page Picto-Editorial, as I said above, written by Marty Arbunich and drawn by Bill Dubay. basically it’s is an editorial drawn in a comic strip. If you had seen their other fanzine; Voice of Comicdom, which was billed as America’s first newspaper with a comic format, you would be already familiar with this technique!

And by the way, the inside back cover is an ad for that very same fanzine, also published by Golden Gate Features. It looks like they were advertising for issue # 6, at this time during the summer of 1965.

And last, but certainly not least, is the back cover, as drawn by Al Williamson. Here it is, as well:

And that’s all for this edition of Fabulous Finds. Please return soon for additional finds or for another RETRO REVIEW. Hopefully you will not be disappointed.