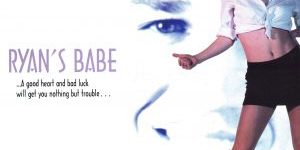 I’m back again with this allegedly-on-indefinite-hiatus column! Let me tell you all what kind of life I lead and friends I have: on Sunday 8/3, a very good friend of mine texts me to saying  “[mutual friend’s boyfriend] is subjecting us to this film which I now feel obligated to share with you at some point soon“. I naturally asked her “what film?” and received this response:

I will only tell you if you swear not to Google it. You must go into this completely blind if you haven’t already heard of it (which you may have but then again, I’m thinking if you have heard of it you would have told us about it or made us watch it already)

By noon, there was a plan in place for me to come over and watch Ryan’s Babe on 8/9. I typed up this intro before heading over, so hold your nose – we’re diving right in together.

Me to my friends, ten minutes in: Should I know who either of these [melon farmers] are?
Them: Get used to that feeling.

A young woman is assaulted by her bodyguard in the woods. She steals his gun, shoots him, and carjacks a young man named Ryan to escape to safety….

At which point we learn this is Ryan’s story and he’s fleeing from his hometown after rejecting his childhood friend Connie’s advances. She attempted suicide over it an her alcoholic father has vowed to blow Ryan’s head off for hurting her. This sets him off on an odyssey across Canada and the U.S. that will see him kidnapped by the mob, date raped by an aging widow, swindled by counterfeiters, beaten, drugged (frequently), and more!

Ray Ramayya, pHD – Canadian school superintendent by day and filmmaker by…other days. He joins Tommy Wiseau and James Nguyen in the “immigrant filmmaker with big dreams and little talent” category, writing/directing/producing a flick that is entirely enjoyable because of the love with which it was crafted, if not the quality.

Before Seeing It: If the friend group I met Tommy Wiseau with recommends it, I imagine there’s something to it.

After Seeing It: …..I had hit up the Videonomicon website and purchased my own copy of the DVD before the movie had even ended, specifically so I could share the love with other friends.

Category: TV & MoviesBy Chris WalkerAugust 13, 2019Leave a comment
Tags: 1 out of 51 Out of 5 Would RecommendRay Ramayya