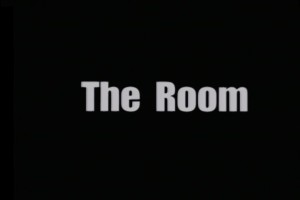 Such a generic title card for something so unique…

Welcome back to One Out of Five – Would Recommend, a movie review column wherein movies that fail at drama are given respect for their unplanned comedy. This week, we’re singing the praises of 2003’s The Room.

Saintly banker Johnny (played by writer/director/producer Tommy Wiseau) is cuckolded by his duplicitous future wife Lisa with his best friend Mark (Retro Puppet Master “star” Greg Sestero) in the indecipherable period of time leading up to his birthday. Drama ensues.

Note: The word “fiancée” is never once said in the movie, as Wiseau allegedly insisted on using English and not French, so they used “Future Wife” and “Future Husband” instead.

Who Made Demented Beauty?

Mysterious and inexplicably successful San Francisco businessman Tommy Wiseau. This is his magnum opus, the culmination of a life spent dreaming of Hollywood stardom. He paid six million dollars from his own pocket to make his dream come true -three million more than Kevin Smith’s Tusk cost, to give you a reference point.  If he’d had even a scintilla of talent or skill, he could have made something worthy of basic obscurity…like Kevin Smith’s Red State, to give you a reference point. It is because he lacked talent, skill, or self-awareness that he made a masterpiece.

Five Reasons to See It:

“The Room” is an awful movie by any objective standard, but like the legendary Plan 9  it ends up eminently enjoyable because of it. Like Ed Wood, it is Wiseau’s unwavering belief in his art combined with his utter lack of ability that makes the film a thing of bizarre beauty. It has allowed the movie to grow a dedicated fan base over the last decade and spawn a bevy of  tie-ins, official or otherwise: there are Rocky Horror-esque midnight shows, a RiffTrax commentary and upcoming live show (May 6, 2015), a fan made online game, and a tell-all memoir by Greg Sestero (The Disaster Artist, which raises as many questions as it answers). It’s Plan 9 from Outer Space for the Millennial generation, so go check it out. 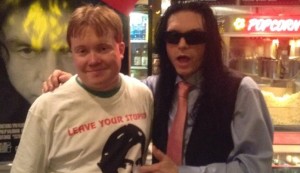 The answer to “So how does he know what Wiseau’s like in person?”