1 out of 5 – Would Recommend: The Miami Connection 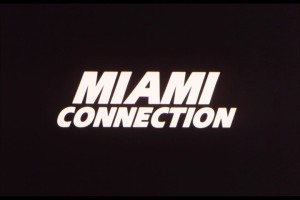 Welcome back to 1 out of 5 – Would Recommend, where movies that are awfully great (in a literal sense) get their due. This week, we will be examining the 1987 masterpiece of poorly executed action cinema known as The Miami Connection.

Who Was The Brain Trust Behind It?

Low budget filmmaker Richard Park and Taekwondo Grandmaster/Motivational Speaker Y. K. Kim. Kim was a mild celebrity in Central Florida and Park thought he’d be the ideal personality to build an action movie around. Kim, despite having never acted before, felt that a movie would be a great way to spread his philosophy. It was a match made in bad movie heaven.

Unfortunately for the rest of us, Kim figured that out pretty quickly after the movie’s release and it never had more than a short regional run in theaters and quickly disappeared into obscurity. Luckily for those of us who love bad movies, Drafthouse Films rescued it three years ago and it is now available in all its glory.

The movie barely has a plot, can only charitably be said to be acted, and is the result of well-intentioned people trying their damnedest. That is what makes the absolute best 1 out of 5 movies: a magical combination of honest, enthusiastic indie effort and a genuine lack of talent/skill that so rarely comes along. It is to action what The Room is to drama and Plan 9 from Outer Space is to sci-fi/horror. You can go watch it right now through Netflix or iTunes, and RiffTrax will be bringing it live to theaters in October, so there’s no reason not to check it out.