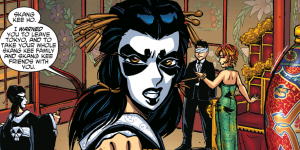 Like the rest of the Mangaverse, it’s an Imaginary Story wherein Marvel’s characters are reinterpreted through the lens of Japanese comics. Or more accurately, through American creators’ understanding of Japanese comic tropes and conventions.

The Punisher is a brutal, geisha-themed vigilante that is punishing the Yakuza….with canings, spankings, and cruel words! Sosumi Brown is an uptight boarding school headmistress who is taking custody of her juvenile delinquent/martial arts master sister Hashi. These two women, seemingly opposites, are actually one in the same and her both of her lives are threatened by the machinations of the Korean Yakuza gang, the Skang Kee family and their cruel leader Ho.

“The Kinkiest Superhero in Tokyo” is undoubtedly not a family friendly concept…but then again, neither is Marvel’s most violent vigilante.