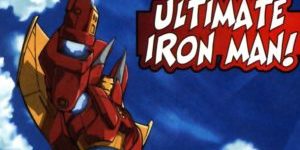 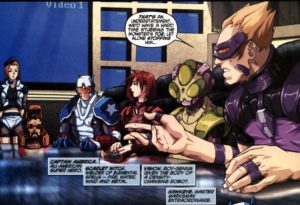 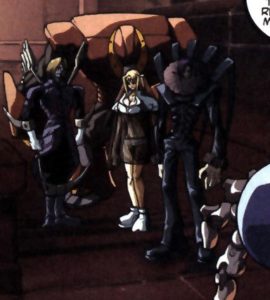 This would be best classed as a Royale With Cheese – there’s no specific point of divergence nor is there a specific mold into which the characters are being fit. It’s just the regular Marvel Universe but slightly more anime-y (Whedonisms for the win).

Amusingly, when the Marvel Universe was made into an actual anime, the design work and storyline was far more similar to that of the 616 than anything else.

The Hulk is on a rampage and it’s up to The Avengers to put a stop to it! Unfortunately, since this is the Mangaverse, the Hulk is kaiju sized and The Avengers are, well, not. Luckily, the disembodied head of Tony Stark – their benefactor – built the incredibly powerful Iron Avenger vehicles for just such an eventuality. Now it’s a race between The Avengers and their arch-foes, Apocalypse and the Four Horsemen, to see who can get their hands on these all-powerful fighting machines first.

There’s really not that much that’s super different about this setting Sure, the designs are anime influenced and a few characters have slightly different powers while one sports a wildly different backstory (The Vision is a boy genius uploaded into a robot of his own making) but all of that information comes from captions. Due to the story’s short, one and done nature, there really isn’t space to make it wildly different from the mainstream ‘verse. If it were redrawn, only a few changes (and ignoring the obvious line-up problems) could comfortably make it into a flashback story set in the 616. 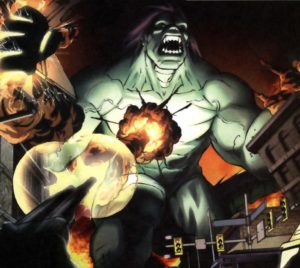 Save for the “Building Sized Hulk” part…

Come back next week for Tokusatsu Gesundheit, where I will probably write about the American Tokusatsu movie currently in theaters.