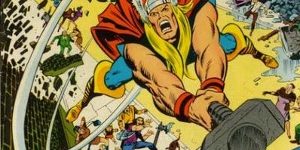 Time to jump into it with both feet.  First up is the cover for Thor # 179.  It’s Jack Kirby’s last Thor interior work, but it features a Neal Adams cover.  Here tis: 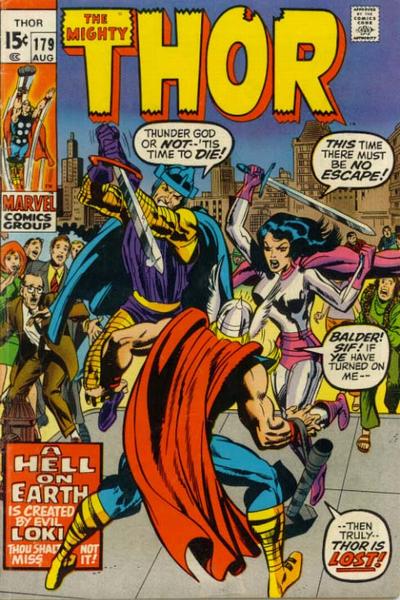 It appears that the cover is all Adams, but I believe that John Romita Sr. maybe have done some corrections/alterations to it.  Look at some of those background figures.  Most people believe that the inks were supplied by John Verpoorten.  Truthfully, it is not that striking a cover, at least by Marvel’s standards.

The story is entitled; “No More Thunder God!”.  It is scripted by Stan Lee, pencilled by Jack Kirby and the inks are by the duo of Vince Colletta and John Verpoorten.  For the record the story is apparently subtitled; “The Terrible Vengeance Of Loki!”.  The latter may have been Stan’s prefered title, but Jack’s art came in with the No More Thunder God title emblazoned on the splash page.

The story itself is all about Loki seeking vengeance upon his half-brother, Thor.  And to put it into a nutshell, Loki, using something called “the Living Mask” manages to switch faces and bodies with Thor.  The rest of the comic features Balder and the Lady Sif battling Loki, who is in reality, Thor!

Issue # 180 arrived on the stand the following month and featured a cover by John Buscema, with an assist from Marie Severin.  The inks were by Joe Sinnott.  Though Neal Adams has stated that he drew the cover, but I sure don’t see it.  Maybe he did a thumbnail sketch from which the cover was then drawn by Buscema.  You be the judge. 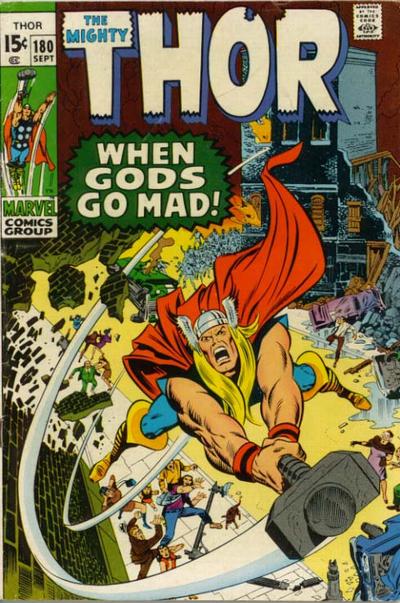 The story in this book is entitled:”When Gods Go Mad!” and is again scripted by Stan Lee, but the pencils this issue are by Neal Adams and Joe Sinnott supplies his usual wonderful inks to Neal’s pencils.  The book leads off with a great splash page, only the Thor pictured in said splash is actually Loki.

The issue itself features great battles between Thor (Loki) versus Loki (Thor), then Thor (Loki) against Balder and Sif.  Odin even gets involved whisking Loki (Thor)  away from the battle and placing him in chains in Asgard. Then Odin sends Loki (Thor) to Hades, well at least the Hades run by Mephisto!  So we get additional super battle images drawn by Adams with Loki (Thor) facing off against Mephisto.

Sif engages the help of the Warriors Three, and they themselves journey to Mephisto’s Hades, only to find Loki (Thor) entombed within mystical ice by Mephisto.  And that’s where this, second issue of the three issue trilogy, ends.

Which bring us finally to The Mighty Thor # 181.  Again the cover is penciled by John Buscema, with background assistance from Marie Severin.  The inking job was either done by Joe Sinnott or John Verpoorten.  There seems to be a dispute about this in the records.  Take a look: 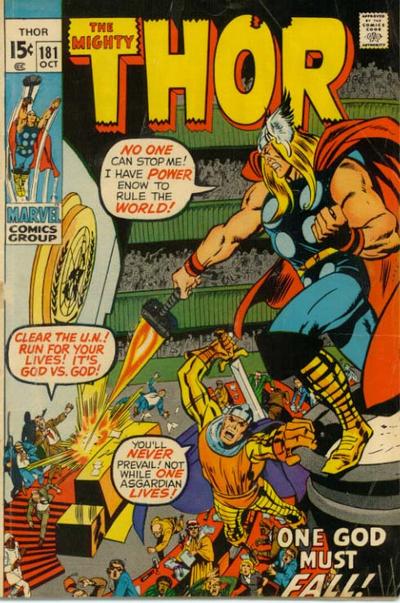 The story is entitled;”One God Must Fall!”  It is scripted by Stan Lee.  Neal Adams provided the pencils and Joe Sinnott the inks for the interior of this comic.

Things start off with a bang, with the Lady Sif and the Warriors Three battling Mephisto for the life and soul of Loki, who is actually Thor, trapped in Loki’s body.  Thor uses Loki’s powers to assist Sif and is finally freed.  The scene switches between Hades and Earth on page seven with a great two panels, that take up 2/3s of the page where Mephisto and Thor (actually Loki) are in the same pose.  A pretty striking image in truth!

Thor (Loki) is now in the United Nations declaring that all humanity shall be his slaves.  Balder the Brave breaks through and confronts him.  Meanwhile Loki (Thor) faces off against Mephisto and using the power of goodness causes Mephisto to send him away.  Mephisto also send Sif and the Warriors Three away, as well.  All of them appear back in Asgard.  Loki (Thor) immediately leaves for Earth to confront Thor (Loki), but Odin finally finds out about Loki’s plans, and plucks him from the United Nations, where he has just defeated Balder, and drops him into a construction site where Loki (Thor) awaits.

Once again Thor and Loki battle.  Things don’t go so well until Loki (Thor) gets Thor (Loki) to throw his hammer, and in that moment strikes.  The hammer, does not return to Thor (Loki) and Loki (Thor) transform back to mortal Donald Blake, and the spirit of Loki is forced back into his own body.  Blake quickly reclaims his cane, striking it and becoming Thor once again.  Loki realizes his plan has failed and surrenders, but disappears to plan anew.  Thor flies away declaring that evil will never triumph as long as he is Thor!

A pretty good mini run of a great silver age series.  It witnesses the passing off of the baton from Jack Kirby to Neal Adams, who would not draw any more Thor comics after these two issues, but cover artist John Buscema would step into the breach and become Thor’s artist for some time to follow.

That’s all see wrote for this episode of RETRO REVIEW, but I’ll be back next week with a new Fabulous Find and here again in two weeks for another new RETRO REVIEW.  Spring is finally here and the baseball season soon to begin.  Take care everyone!