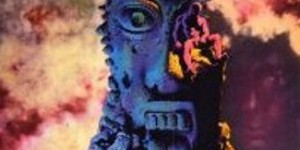 It’s time for a new Fabulous Find and this week I want to again select something maybe a little rarer.  I’ve pulled out a square bound magazine published by The Morning Star Press, Ltd., entitled; Ariel, a fantasy magazine.  It’s cover dated Autumn 1976 and sold for $5.95 if you could find it.  I don’t remember if I bought it on the newsstand, or from a bookstore, or ordered from the back of another publication.

This issue is the first issue.  I’m not exactly sure how long the magazine was published, but I own the first three issues, so I know it lasted at least that long.  The front cover features an illustration by Richard Corben, and features his character; Den.  Take a look: 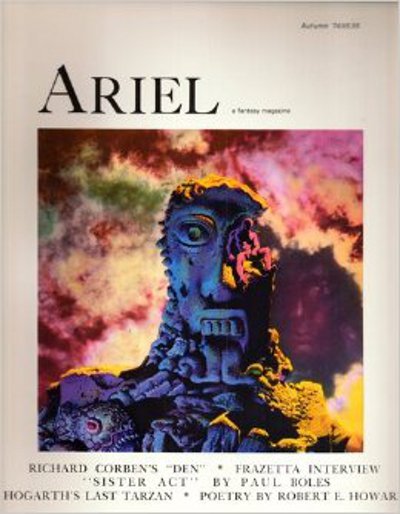 The magazine measures nine (9) by twelve (12) inches, and as I said earlier, it is square bound.  The publisher is listed as; Armand Eisen and the editor is listed as; Thomas Durwood.

The contents of this first issue are varied.  After an illustrated Table of Contents, the magazine leads off with an article written by Peter Jackson.  Is this the same Peter Jackson that has become famous directing the Lord of the Rings and Hobbit movies?  I don’t know, but it sure could be, as he is known as a fan of this type of material.  His article is entitled; “A Hero Lives In Brooklyn” and is about the artist, Frank Frazetta.  Jackson compares Frazetta to Marlon Brando in The Wild Ones throughout the article.

Following this article. is part one of an interview with Frank Frazetta, himself.  The second part of the interview appears in issue number two (2).  Next up, is another article regarding Frank Frazetta’s artwork, discussing an art-history perspective on his style, written by Margaret Wilson-Cline.  All three of these pieces are profusely illustrated with Frank Frazetta artwork.

Next, is a five page story written by Paul Boles, entitled; “Sister Act” that is billed as a tall tale of the time that P.T. Barnum got took. Following this short story is a poem by Robert E. Howard, entitled; “The Symbol”.

All work to this point has been in black and white, but the centerpiece of the magazine comes next, and it is in full color.  It’s sixteen (16) pages written and drawn by cover artist, Richard Corben, featuring his character, Den.  Following this “pictorial fiction” story is another poem written by Robert E. Howard, entitled; “A Crown For A King”.

Next up, is a short article on Those Fantastic Covers that appeared on the old pulp magazines from the thirties and forties written by Charles Wooley.  Hmmn, I knew a Chuck Wooley growing up.  I wonder if this is him?  I think the likelihood of that is much less than my Peter Jackson query above.

Following this is a pulp like story entitled; “The Fiend Within” which is written by John Pocsik, with spot illustrations by Arnold, sorry I don’t know his full name, as he’s not credited within the magazine.  This story features a character named; Isaac Grail during the time of the Spanish Inquisition.

Another interview follows this story and the subject is Tarzan artist; Burne Hogarth.  Mr. Hogarth is interviewed by T. Durwood and the interview features lots and lots of wonderful Hogarth artwork.

Next up, is an article by Tappan King, entitled; “Will The Real Bruce Wayne Please Stand Up?”.  In which Mr. King chronicles the many identity crisis that DC Comics’ Bruce Wayne has gone through since his origins in Detective Comics # 27.  This article also features artwork from the Batman comic over the last four decades.

The back cover is a reprinting of a Frank Frazetta painting, featuring Conan battling two Frost Giants or Norsemen.

A pretty nice package for 1976, and one that certainly wasn’t cheap at $5.95, but as you can see, you certainly got your monies worth, if you came across it and chose to pick it up.  The three issues I own, are similar in content, and I think all three are well worth owning.

That’s it for this week, but please come back next week, for a new RETRO REVIEW, and again in two weeks, for a new Fabulous Find.