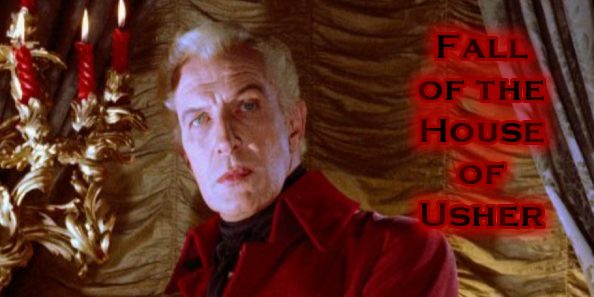 Fall of the House of Usher (nitpick – the title sequence is actually simply “House of Usher”, but every reference we’ve ever seen to the film, including the DVD box includes the “Fall of”.) is a great movie, so let’s just get that out of the way up front.  It’s a fine balance of the creepy gothic sets that Hammer did so well a few years earlier, combined with good writing, mostly good acting and a few gut-punching surprises.

The “King of B-Movies” Roger Corman hit a home run when he lined Vincent Price up to partake in this and most of his other Poe adaptations. By this time Corman had directed 25 other films and his filmography wasn’t exactly awe-inspiring in terms of quality. Getting Vincent Price locked down definitely brought legitimacy to this film.

Note that there are only four actors in the entire movie!

Synopsis of Fall of the House of Usher

Philip Winthrop, played by Mark Damon, is engaged to be married to Madeline Usher (Myrna Fahey), so he makes his way through a foggy tarn to the decrepit mansion where she and her brother, Roderick Usher (Vincent Price) live.  Roderick is clearly not happy to see him and does everything in his power to dissuade Philip from marrying his sister, begging him to just give up the plan and leave.

We learn that there is a curse on the Usher family, which has seen more than its fair share of insanity and evil.  Roderick himself is afflicted with a hypersensitivity to sounds, lights, and textures which makes him highly anxious and possessed of the belief that the bloodline must end or it will inflict further evils on the world.

Because of a tragic struggle with Roderick, Madeline dies and is whisked away to be entombed in the family crypt.  After several days, Philip discovers from the butler (Harry Ellerbe) that Madeline has catalepsy and may not actually be dead. After Philip tears open the coffin, which is empty as expected, he tries to find Madeline.  However, she is now completely insane and seeks out her brother for a fitting revenge, knowing he buried her alive on purpose.

As they struggle, a fire breaks out and the mansion crumbles into pieces as Philip makes his escape.  We end the film with Poe’s final passage from the original short story, “…and the deep and dank tarn closed sullenly and silently over the fragments of the ‘House of Usher.'”

Things We Loved in Fall of the House of Usher

The lighting and mood was great.  I really liked the scene where they are grimly marching in a funeral procession down the stairs to the crypt, lit only by a carried torch.  Corman used a dim spot light to follow the group as they slowly descend.  A low cost decision but an effective one!

Vincent Price’s monologues were so good.  The other actors and some of the script were of middling talent, but whenever VP had a moment to wax poetic, the entire production is transformed into something great.  I swear he could read the ingredients in a pack of Twinkies and we would pay rapt attention.

Pay attention to Vincent Price’s brilliant blonde hair and lack of classy mustache.  This is a rare look for Price!

Poor acting from the other two main characters, a few dead spots in the pacing, and inconsistency with plot devices.  However, the overall mood of the film, coupled with the incomparable Vincent Price keeps it in the “classic” column.

Our Rating of Fall of the House of Usher

Both Mike and Scott give it thumbs up – must see!

Let us know your thoughts and observations about the Fall of the House of Usher in the comments.

For our next Watch It! we’re moving to the second of Corman’s Edgar Allan Poe movies: The Pit and the Pendulum (1961).  Watch it by Monday, 9/8 and look for our next column.